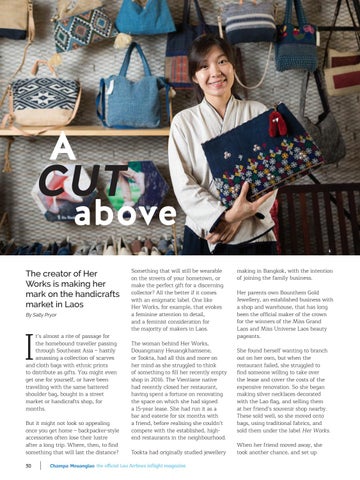 t’s almost a rite of passage for the homebound traveller passing through Southeast Asia – hastily amassing a collection of scarves and cloth bags with ethnic prints to distribute as gifts. You might even get one for yourself, or have been travelling with the same battered shoulder bag, bought in a street market or handicrafts shop, for months. But it might not look so appealing once you get home – backpacker-style accessories often lose their lustre after a long trip. Where, then, to ﬁnd something that will last the distance?

Something that will still be wearable on the streets of your hometown, or make the perfect gift for a discerning collector? All the better if it comes with an enigmatic label. One like Her Works, for example, that evokes a feminine attention to detail, and a feminist consideration for the majority of makers in Laos. The woman behind Her Works, Douangmany Heuangkhamsene, or Tookta, had all this and more on her mind as she struggled to think of something to ﬁll her recently empty shop in 2016. The Vientiane native had recently closed her restaurant, having spent a fortune on renovating the space on which she had signed a 15-year lease. She had run it as a bar and eaterie for six months with a friend, before realising she couldn’t compete with the established, highend restaurants in the neighbourhood. Tookta had originally studied jewellery

making in Bangkok, with the intention of joining the family business. Her parents own Bounthem Gold Jewellery, an established business with a shop and warehouse, that has long been the ofﬁcial maker of the crown for the winners of the Miss Grand Laos and Miss Universe Laos beauty pageants. She found herself wanting to branch out on her own, but when the restaurant failed, she struggled to ﬁnd someone willing to take over the lease and cover the costs of the expensive renovation. So she began making silver necklaces decorated with the Lao ﬂag, and selling them at her friend’s souvenir shop nearby. These sold well, so she moved onto bags, using traditional fabrics, and sold them under the label Her Works. When her friend moved away, she took another chance, and set up 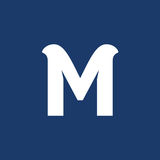 What to, see, do and eat in around Pakse

A Taste of Home

A Simple Solution to a Simple Problem

A new resort in northern Laos

Two female artists are finding their voice in Vientiane

The Kiridara Hotel is an ideal hilltop getaway

Architecture of a bygone era

You're Speaking with ACC