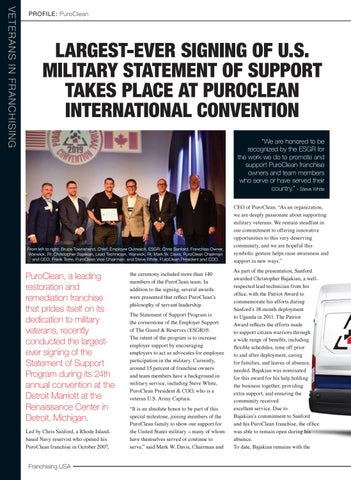 Largest-Ever Signing of U.S. Military Statement of Support Takes Place at PuroClean International Convention “We are honored to be recognized by the ESGR for the work we do to promote and support PuroClean franchise owners and team members who serve or have served their country.” - Steve White

PuroClean, a leading restoration and remediation franchise that prides itself on its dedication to military veterans, recently conducted the largestever signing of the Statement of Support Program during its 24th annual convention at the Detroit Marriott at the Renaissance Center in Detroit, Michigan. Led by Chris Sanford, a Rhode Islandbased Navy reservist who opened his PuroClean franchise in October 2007,

the ceremony included more than 140 members of the PuroClean team. In addition to the signing, several awards were presented that reflect PuroClean’s philosophy of servant leadership. The Statement of Support Program is the cornerstone of the Employer Support of The Guard &amp; Reserves (ESGR)®. The intent of the program is to increase employer support by encouraging employers to act as advocates for employee participation in the military. Currently, around 15 percent of franchise owners and team members have a background in military service, including Steve White, PuroClean President &amp; COO, who is a veteran U.S. Army Captain. “It is an absolute honor to be part of this special milestone, joining members of the PuroClean family to show our support for the United States military – many of whom have themselves served or continue to serve,” said Mark W. Davis, Chairman and

CEO of PuroClean. “As an organization, we are deeply passionate about supporting military veterans. We remain steadfast in our commitment to offering innovative opportunities to this very deserving community, and we are hopeful this symbolic gesture helps raise awareness and support in new ways.” As part of the presentation, Sanford awarded Christopher Bajakian, a wellrespected lead technician from his office, with the Patriot Award to commemorate his efforts during Sanford’s 18-month deployment to Uganda in 2011. The Patriot Award reflects the efforts made to support citizen warriors through a wide range of benefits, including flexible schedules, time off prior to and after deployment, caring for families, and leaves of absence, if needed. Bajakian was nominated for this award for his help holding the business together, providing extra support, and ensuring the community received excellent service. Due to Bajakian’s commitment to Sanford and his PuroClean franchise, the office was able to remain open during his absence. To date, Bajakian remains with the 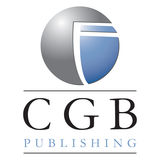