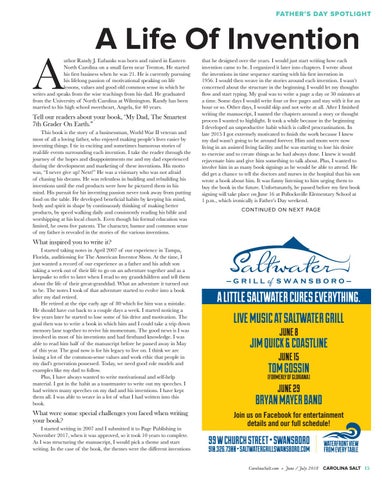 A Life Of Invention

uthor Randy J. Eubanks was born and raised in Eastern North Carolina on a small farm near Trenton. He started his first business when he was 21. He is currently pursuing his lifelong passion of motivational speaking on life lessons, values and good old common sense in which he writes and speaks from the wise teachings from his dad. He graduated from the University of North Carolina at Wilmington. Randy has been married to his high school sweetheart, Angela, for 40 years.

Tell our readers about your book, ‘My Dad, The Smartest 7th Grader On Earth.” This book is the story of a businessman, World War II veteran and most of all a loving father, who enjoyed making people’s lives easier by inventing things. I tie in exciting and sometimes humorous stories of real-life events surrounding each invention. I take the reader through the journey of the hopes and disappointments me and my dad experienced during the development and marketing of these inventions. His motto was, “I never give up! Next!” He was a visionary who was not afraid of chasing his dreams. He was relentless in building and rebuilding his inventions until the end products were how he pictured them in his mind. His pursuit for his inventing passion never took away from putting food on the table. He developed beneficial habits by keeping his mind, body and spirit in shape by continuously thinking of making better products, by speed walking daily and consistently reading his bible and worshipping at his local church. Even though his formal education was limited, he owns five patents. The character, humor and common sense of my father is revealed in the stories of the various inventions.

that he designed over the years. I would just start writing how each invention came to be. I organized it later into chapters. I wrote about the inventions in time sequence starting with his first invention in 1956. I would then weave in the stories around each invention. I wasn’t concerned about the structure in the beginning. I would let my thoughts flow and start typing. My goal was to write a page a day or 30 minutes at a time. Some days I would write four or five pages and stay with it for an hour or so. Other days, I would skip and not write at all. After I finished writing the manuscript, I named the chapters around a story or thought process I wanted to highlight. It took a while because in the beginning I developed an unproductive habit which is called procrastination. In late 2015 I got extremely motivated to finish the work because I knew my dad wasn’t going to be around forever. Him and mom were now living in an assisted living facility and he was starting to lose his desire to exercise and to create things as he had always done. I knew it would rejuvenate him and give him something to talk about. Plus, I wanted to involve him in as many book signings as he would be able to attend. He did get a chance to tell the doctors and nurses in the hospital that his son wrote a book about him. It was funny listening to him urging them to buy the book in the future. Unfortunately, he passed before my first book signing will take place on June 16 at Pollocksville Elementary School at 1 p.m., which ironically is Father’s Day weekend. CONTINUED ON NEXT PAGE

What inspired you to write it? I started taking notes in April 2007 of our experience in Tampa, Florida, auditioning for The American Inventor Show. At the time, I just wanted a record of our experience as a father and his adult son taking a week out of their life to go on an adventure together and as a keepsake to refer to later when I read to my grandchildren and tell them about the life of their great-granddad. What an adventure it turned out to be. The notes I took of that adventure started to evolve into a book after my dad retired. He retired at the ripe early age of 80 which for him was a mistake. He should have cut back to a couple days a week. I started noticing a few years later he started to lose some of his drive and motivation. The goal then was to write a book in which him and I could take a trip down memory lane together to revive his momentum. The good news is I was involved in most of his inventions and had firsthand knowledge. I was able to read him half of the manuscript before he passed away in May of this year. The goal now is for his legacy to live on. I think we are losing a lot of the common-sense values and work ethic that people in my dad’s generation possessed. Today, we need good role models and examples like my dad to follow. Plus, I have always wanted to write motivational and self-help material. I got in the habit as a toastmaster to write out my speeches. I had written many speeches on my dad and his inventions. I have kept them all. I was able to weave in a lot of what I had written into this book.

What were some special challenges you faced when writing your book? I started writing in 2007 and I submitted it to Page Publishing in November 2017, when it was approved, so it took 10 years to complete. As I was structuring the manuscript, I would pick a theme and start writing. In the case of the book, the themes were the different inventions

BRYAN MAYER BAND Join us on Facebook for entertainment details and our full schedule!

WATERFRONT VIEW FROM EVERY TABLE