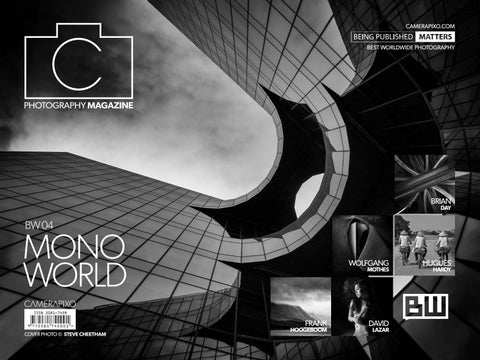 SEEING THINGS DIFFERENTLY Passion for black and white images is something that just stuck and is unexplainable. Steve thinks of himself that he is just wired that way as he has always had an interest in line drawings and schematics. It would maybe explain that it comes from time spent in his teenage years in the school darkroom. Whatever the source, Steve has decided several years ago to focus entirely on monochrome work and to try to hone his photographic skills in this area. It must be working, as a friend of Steve while on a recent trip to Iceland said ‘You just see

things differently to the rest of us.’ and Steve strongly agrees that he does. The subject matter that Steve gravitates towards tends to be strong, bold shapes whether that be naturally occurring landscapes or man-made architecture. He loves long exposure work, and finds the contrast between moving elements such as cloud or water and static elements such as rocks and buildings particularly interesting. Steve found out that he needs to to travel increasingly long distances to find captivating subject matter.

He enjoys travelling though, so this is not a problem at all. Steve has recently returned from Iceland and found the experience and the landscape quite simply mind-blowing. Steve is turning fifty next year and he is planning an exhibition, and possibly a book to be called "50:Fifty featuring 50 of my favourite images that I’ve made over the years". Following that he is looking to re-visit Iceland, probably a number of times and may look at putting together a book from those images too.

WHERE THE SUN WILL RISE NO MORE / STEVE CHEETHAM Â© 22

CAMERAPIXO magazine is recognized around the world as one of the largest independent online photography magazines. Thanks to the variety of itâ&#x20AC;&#x2122;s publications and a diverse network of other journalists and media professionals makes it easy to start working as an independent contributor.

Camerapixo Press Card gives me confidence in crisis situations, such as demonstrations and riots, where I often have to deal with the police and a hostile crowd of people. Knowing that I'm not an anonymous photographer but member of the Camerapixo gives me motivation to work better and with continuous improvement. It is also a commitment to follow the photojournalist Code of Ethics. And this way, thanks to Camerapixo Press Card I began to act like a pro, and I am also treated this way, while remaining independent photojournalist. This Press Card is a proven tool. The perfect complement is also the ability to publish the photoreportage in Camerapixo photography magazine as well as on their website.

DAVID LAZAR © “A STACK OF SIBLINGS”

© JEAN-PASCAL AMATI “THE POWER OF MOVEMENT”

© HENK LANGERAK “AT THE MARKET”

“MAN WALKS THROUGH INCENSE SMOKE IN A TEMPLE” 75 © HUGUES HARDY

HUGUES HARDY © 78 “FISHERMAN PULLS HIS BOAT BACK TO THE BEACH”

“THREE WOMEN ON BICYCLES ON A COUNTRYSIDE ROAD” 79 © HUGUES HARDY

“BUDDHIST MONK ROCKED BY THE MOTION OF THE TRAIN”

© JAN LAGENDIJK “FUN ON THE MARKET”

SHEIKH ZAYED GRAND MOSQUE IS ONE OF THE EIGHT LARGEST IN THE WORLD AND IS IMPRESSIVE NOT ONLY FOR ITS SIZE BUT FOR ITS ARCHITECTURE. WITH MARBLE WALLS, INTRICATE STONE WORK AND CRYSTAL CHANDELIERS, THIS MOSQUE TRULY IS JAW-DROPPINGLY BEAUTIFUL. THE SHEIKH ZAYED GRAND MOSQUE TAKES THE NAME OF THE FIRST RULER OF THE UAE, THE LATE SHEIKH ZAYED BIN SULTAN AL NAHYAN. IT WAS HIS HIGHNESS’S DREAM AND VISION TO BUILD THIS MOSQUE AND HE SET ITS FOUNDATION STONE.

“THE ENLIGHTENED ONE” 129 © CHIRAG KHATRI

“OLD BRIDGE IN THE OLD TOWN OF TRONDHEIM” 179 © TOMASZ SLAWINSKI