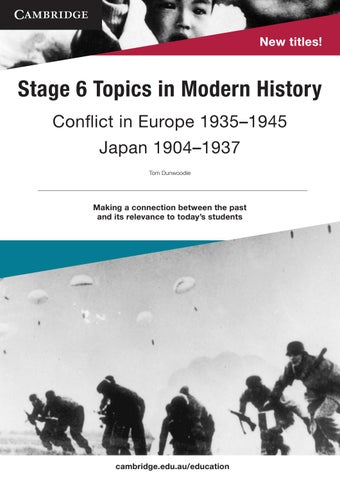 New titles The two new topic books added to this comprehensive series will meet the needs of students wanting in-depth coverage for the Peace and Conflict or the National Study section of the Stage 6 syllabus and, in the case of Japan, will meet the requirement to study one non-Western topic.

Why choose this series Making the connection between history and its relevance to the lives of today’s students, the Stage 6 Topics in Modern History series has been written specifically for the new NSW Modern History syllabus to help students develop the key historical thinking and writing skills required for exam success and beyond. •

Comprehensive exam preparation support enables students to consolidate and reflect on their learning through end-of-section summaries and exam-style questions that directly address the syllabus outcomes and encourage students to think and write like an historian.

Valuable comprehension and revision tools are featured throughout, including timelines of key events, maps, diagrams and explanations of key personalities, groups and terms.

Inquiry-based questions at the beginning of each section foster a deeper understanding of content and aid comprehension. The text has been carefully structured to guide students to answer the question when they reach the end of the section.

A range of engaging activities help students think like historians and ensure they are meeting course requirements. The activities allow students to apply their knowledge of historical skills and concepts and to practise key writing skills for assessments and exams.

The Interactive Textbook provides rich digital content such as video footage of historical events and personalities and digital activities to bring modern history to life.

Digital components The Interactive Textbook The online version of the student text delivers a host of interactive features to enhance the teaching and learning experience. Features include: •

Downloadable versions of the activities

Access to the Offline Textbook, a downloadable version of the student text with note-taking and bookmarking enabled

Other titles in this series

Part 1: The path to war in Europe

Tom is currently a teacher/librarian at Trinity Catholic College in Goulburn. He has previously served as Head of History for the multi-campus M.E.T Schools in New South Wales. As Campus Coordinator in Goulburn, Tom was Lead Teacher on introducing Harvard’s Visible Thinking Routines, and developing a program fostering self-directed learning. He has attended several universities, most recently obtaining a Masters of Humanities in research from the University of New England, Armidale. Tom is also a co-author of Cambridge’s new title History Transformed Stage 5.

3 The outbreak of World War II

4 The attack in the west

5 The Battle of Britain

7 War in the east

Part 4: The home front and civilians

Part 5: Ending the war in Europe

16 The death throes of Nazism

Melissa Bright Power and Authority in the Modern World 1919–1946

Part 2: The successes and failures of Japan’s democracy

5 Influences on the developing democracy

Part 3: The rise of militarism in Japan

9 The impact of militarism

Contents are subject to change prior to publication.