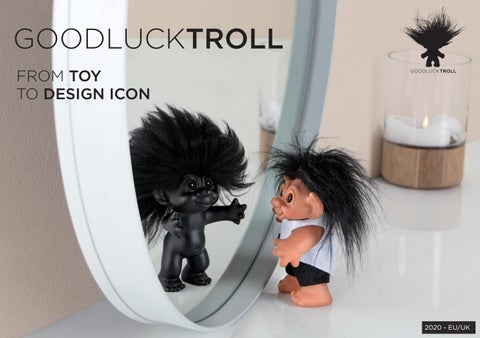 GOODLUCKTROLL FROM TOY TO DESIGN ICON

Thomas Dam started producing sculptures in natural rubber. Thomas explained that he wanted to create a figure that, although it was far from beautiful, had the ability to make people smile and feel good. The troll was intented to embrace and hug the world, with its arms being stretched in the “Give me a hug position”.

The GoodLuck Troll itself received a tremendous amount of attention in this period, and even visited President John F. Kennedy in the White House. The famous female pilot Betty Miller, who received a medal for her achievement of single handed flying a small aircraft across the Pacific Ocean, brought a GoodLuck Troll with her on the journey.

In April the Life Magazine used a full, colored page to cover the US “mysterious” Troll invasion. Many years later the New York Times dedicated the entire front-page of the Art & Culture section to the story of the GoodLuck Troll and its father Thomas Dam.

Thomas Dam, known to many Troll collectors as Father of Trolls, was raised in a small village named Gjøl in Northern Denmark. His dad was a poor fisherman and Thomas was expected to follow in his father’s footsteps as a fisherman too, but Thomas was not big and strong, and didn’t find fishing very appealing.

The US Toy Industry Association (TIA) named the GoodLuck Troll “Toy of the Year”. In 1964 the troll was used as a mascot on the entrance pass for the World Exhibition in New York.

Thomas Dam died of cancer in 1989 and did not live to experience the gigantic return of the GoodLuck Troll in the early 90’s.

2011 - DREAMWORKS BUYS THE RIGHTS FOR THE GOODLUCK TROLL Thomas dreamt about turning the story of his trolls into a movie, but when he lost the Copyright in 1965 this dream seemed unreal. However, after his company Dam Things spent almost 10 years in different courts fighting to get the once lost Copyright back, they succeeded, and the GoodLuck Troll was ready to conquer the world once again. In 2010 Dam Things and its advisors approached a number of Hollywood Studios and realized the large interest in the story about the GoodLuck Troll. In 2011 Dam Things announced the cooperation with DreamWorks Animation to produce a film about the life of the trolls.

The movie Trolls produced by Dreamworks in 2016, was dedicated to Thomas Dam, and is about the Goodluck troll that he created. The film was directed by Mike Mitchell, staring superstars like Anna Kendrick and Justin Timberlake. The movie grossed $344 million worldwide, and received an Academy Award nomination for Best Original Song for ”Can’t Stop the Feeling!”

Anna Kendrick and Justin Timberlake reappears in their roles in Trolls 2 with release date in 2020. The adventure of the trolls continues...

In 2015 Dam Things started to cooperate with bySommer to turn the classic trolls into a design icon. Trolls fans are now able to have a fashionable memory of their childhood as a design object in their house. These new trolls were first seen in Denmark in 2015, and have been very popular from day one. More than 500 stores in Denmark are selling the trolls, as well as more than 100 stores in Norway and Sweden.

At the Royal Danish Visit in Stockholm in 2017, Prince Daniel of Sweden, tells the Danish Crown Princess Mary that every Swedish child had a GoodLuck Troll during their childhood.

bySommer makes an agreement with DreamWorks/Universal, which grants bySommer the privilege to sell Goodluck Trolls in 111 new countries. Contact export@bysommer.eu to hear more about your opportunities to become a Goodluck Troll retailer.

CLASSIC TROLLS Thomas Dam got the idea to make the original rubber troll on a trip to the United States in the 1960s. Since that day many exciting editions of the Dam Troll have been developed in rubber and dressed in different clothes. In 2014, bySommer started a partnership with the Dam family. bySommer presented an idea of creating the Dam Troll in a new ceramic material with genuine sheep skin hair - all in the spirit of Thomas Dam. The mission is to relaunch Thomas Damâ&#x20AC;&#x2122;s world famous toy as a design icon for home decor.

This new collection celebrate Thomas Dam by returning to where it all began â&#x20AC;&#x201C; with the idea that a heart of gold can change everything. A very special Limited Edition Goodluck Troll is designed as a special tribute to Thomas Dam and the Goodluck Troll. The troll is in brushed brass with molded hair and extra-large eyes. This special troll has a heart of 14 carat gold inside. The collection also has a 9 and 12 cm troll with a heart carved into the chest of the troll.

TROLLS 2 - WORLD TOUR Coming in 2020 In 2020, one of the most successfull movies are back in the cinemas. The hype around Trolls 2 Word Tour is enormous. With the returning All-star cast that includes Anna Kendrick (Poppy), Justin Timberlake (Branch), James Corden (Biggie), Caroline Hjelt (Chenille), Aino Jawo (Satin), Ron Funches (Cooper) and Kunal Nayyar (Guy Diamond), who are joined by Sam Rockwell, Chance the Rapper, Anthony Ramos, Karan Soni, Flula Borg and Jamie Dornan, who will voice new characters for this all-new instalment in the Trolls franchise. Itâ&#x20AC;&#x2122;s all glitter and happiness in Troll Town until Queen Poppy and Branch make a surprising discoveryâ&#x20AC;&#x201D;there are other Troll worlds beyond their own, each defined by a different genre of music. When a mysterious threat puts all the Trolls across the land in danger, Poppy, Branch, and their band of friends must embark on an epic quest through unfamiliar terrain to do the impossible: create harmony among the diverse Trolls to unite them against certain doom.

The danish interior wholesaler - bySommer ApS has with approval from the Dam family, big ideas of recapturing the worldâ&#x20AC;&#x2122;s imagination with a new retro design of the charming little Goodluck Troll. Since 2015, bySommer ApS has refreshed the Goodluck Troll in a modern design. The trolls still have their charming pointy hair and brown eyes that characterizes the figures. 2019 - bySommer in collaboration with Dam Things and Dreamworks bySommer makes an agreement with DreamWorks/Universal, which grants bySommer the privilege to sell Goodluck Trolls in 111 new countries in the EMEA region. 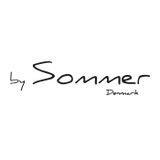