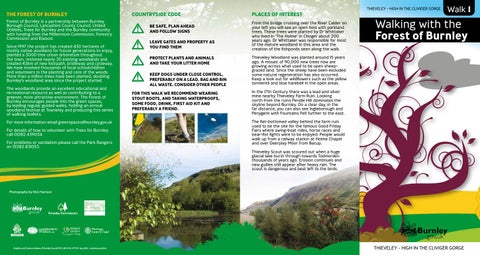 THE FOREST OF BURNLEY Forest of Burnley is a partnership between Burnley Borough Council, Lancashire County Council, United Utilities, Trees for Burnley and the Burnley community with funding from the Millennium Commission, Forestry Commission and Elwood. Since 1997 the project has created 430 hectares of mostly native woodland for future generations to enjoy, planted a 3000 tree urban arboretum throughout the town, restored nearly 30 existing woodlands and created 42km of new footpath, bridleway and cycleway. We have involved thousands of local schoolchildren and volunteers in the planting and care of the woods. More than a million trees have been planted, doubling Burnley’s woodland area since the project started. The woodlands provide an excellent educational and recreational resource as well as contributing to a greener, more attractive environment. The Forest of Burnley encourages people into the green spaces, by leading regular guided walks, holding an annual woodland festival at Towneley and producing this series of walking leaflets. For more information email greenspaces@burnley.gov.uk For details of how to volunteer with Trees for Burnley call 01282 439034. For problems or vandalism please call the Park Rangers on 01282 831053.

COUNTRYSIDE CODE BE SAFE, PLAN AHEAD AND FOLLOW SIGNS LEAVE GATES AND PROPERTY AS YOU FIND THEM PROTECT PLANTS AND ANIMALS AND TAKE YOUR LITTER HOME KEEP DOGS UNDER CLOSE CONTROL, PREFERABLY ON A LEAD. BAG AND BIN ALL WASTE. CONSIDER OTHER PEOPLE FOR THIS WALK WE RECOMMEND WEARING STOUT BOOTS, AND TAKING WATERPROOFS, SOME FOOD, DRINK, FIRST AID KIT AND PREFERABLY A FRIEND.

PLACES OF INTEREST From the bridge crossing over the River Calder on your left you will see an open field with parkland trees. These trees were planted by Dr Whittaker who lived in ‘The Holme’ in Cliviger about 200 years ago. Dr Whittaker was responsible for most of the mature woodland in this area and the creation of the fishponds seen along the walk.

Walking with the Forest of Burnley

Thieveley Woodland was planted around 15 years ago. A mosaic of 90,000 new trees now are growing across what used to be open sheepgrazed land. Since the sheep have been excluded some natural regeneration has also occurred. Keep a look out for wildflowers such as the yellow tormentil and blue harebell in the open areas. In the 17th Century there was a lead and silver mine nearby Thieveley Farm Ruin. Looking north from the ruins Pendle Hill dominates the skyline beyond Burnley. On a clear day, in the far distance, you can also see Ingleborough and Penygent with Fountains Fell further to the east. The flat-bottomed valley behind the farm ruin used to be the site for the famous Good Friday Fairs where swing-boat rides, horse races and bear-fist fights were to be enjoyed. People would walk up from a railway station at Holme Chapel and over Deerplay Moor from Bacup. Thieveley Scout was scoured out when a huge glacial lake burst through towards Todmorden thousands of years ago. Erosion continues and new gullies still appear after heavy rain. The scout is dangerous and best left to the birds.

3 Follow the woodland path marked by Burnley Way marker posts up the steep slope, about 400m, to Thieveley Farm Ruin where there is a picnic bench on your right.

2 Just before the gate take the footpath steps on the right, which head up steeply between Buckley and Dodbottom woods. At the top of the steps you will find a kissing gate, which leads to the woodland sign for ‘Thieveley’.

The walk begins along the 1 Pennine Bridleway, which is adjacent to the bus stop on the right as you face the Ram Inn. Turn left onto the track and follow it down, crossing over the infant River Calder, passing the point where the Pennine Bridleway turns sharp right and on under two railway archways. The track winds round to the left up to a farm gate saying “Buckley Private Road”.

6 After a steep slope down you should pass another picnic table, then come to a kissing gate with a woodland sign. Do not go through this gate. Instead take the path to the right alongside Cliviger fishponds.

5 When you reach a marker post with a yellow arrow on, turn left and follow the series of white marker posts, which will take you along a permissive path downhill between the young trees. You should soon see Cliviger fishponds below you.

4 The path curves round to the left, behind the ruin to a kissing gate. Keep the kissing gate on your right and bear left through the gate gap with a little sign to Calder Head on a post. Carry on downhill 400m, with wall ruins and an old fence on your left, and a flatbottomed valley on your right.

8 Just before a row of cottages turn sharp left up the farm track. Follow the track for 200m over a stile and cattle grid, past the small Calder Head Wood. Continue through the open fields beyond, over another stile and cattle grid. Leave the gates as you found them. Carry on between the barn and the sharp right turn, following the track round to the left until you see three gates.

7 Follow the track to your right, past the first fishpond. At the red lifebuoy turn left over the bridge and around the second fishpond until you come to some wooden steps on your left. Climb the steps up to the road. Shut the gate behind you and cross the busy road carefully. Turn right and follow the pavement for 300m.

WALKING INSTRUCTIONS - NUMBERS CORRESPOND TO POINTS ON THE MAP

It’s a walk as spectacular as many in the Dales or the Lake District, but just a few miles from Burnley town centre.

You will pass through historic woodlands, new Forest of Burnley plantings and near an old lead and silver mine. You’ll see dramatic views of Thieveley Scout, Pendle Hill, Yorkshire’s Stoodley Pike and Cliviger Fishponds.

There is plenty of wildlife to see including peregrine falcons, ravens, deer, herons, kingfishers and woodpeckers.

11 Walk uphill until you reach a stile and pass a FOB sign for Merrill Head. Over the stile, follow the wall past a gate then downhill until you reach a corner stile that joins the Pennine Bridleway. Turn left onto the bridleway and keep heading downwards, through a gate, until you meet the main A646. Cross carefully to the Ram Inn where you began.

path turns a sharp right to cross the stream by a wooden footbridge. Over the bridge climb the stile and follow the path left, heading up toward the tree shelters.

At the Clough bottom the 10

9 Go through the gate with the footpath marker past Light Birks Cottages to the stile. Follow the path around the stone wall leading down the field side of Green Clough Wood. 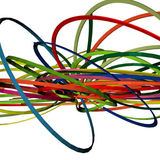