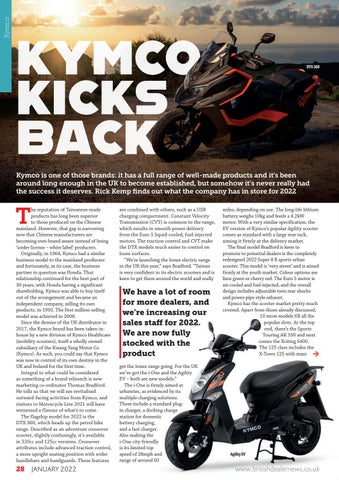 Kymco is one of those brands: it has a full range of well-made products and it’s been around long enough in the UK to become established, but somehow it’s never really had the success it deserves. Rick Kemp finds out what the company has in store for 2022

he reputation of Taiwanese-made products has long been superior to those produced on the Chinese mainland. However, that gap is narrowing now that Chinese manufacturers are becoming own-brand aware instead of being ‘under license – white label’ producers. Originally, in 1964, Kymco had a similar business model to the mainland producers and fortunately, in its case, the business partner in question was Honda. That relationship continued for the best part of 30 years, with Honda having a significant shareholding. Kymco was able to buy itself out of the arrangement and became an independent company, selling its own products, in 1992. The first million-selling model was achieved in 2008. Since the demise of the UK distributor in 2017, the Kymco brand has been taken inhouse by a new division of Kymco Healthcare (mobility scooters), itself a wholly owned subsidiary of the Kwang Yang Motor Co (Kymco). As such, you could say that Kymco was now in control of its own destiny in the UK and Ireland for the first time. Integral to what could be considered as something of a brand relaunch is new marketing co-ordinator Thomas Bradford. He tells us that we will see revitalised outward-facing activities from Kymco, and visitors to Motorcycle Live 2021 will have witnessed a flavour of what’s to come. The flagship model for 2022 is the DTX 360, which heads up the petrol bike range. Described as an adventure crossover scooter, slightly confusingly, it’s available in 320cc and 125cc versions. Crossover attributes include advanced traction control, a more upright seating position with wider handlebars and handguards. These features

are combined with others, such as a USB charging compartment. Constant Velocity Transmission (CVT) is common to the range, which results in smooth power delivery from the Euro 5 liquid-cooled, fuel-injected motors. The traction control and CVT make the DTX models much easier to control on loose surfaces. “We’re launching the Ionex electric range in the UK this year,” says Bradford. “Taiwan is very confident in its electric scooters and is keen to get them around the world and really

We have a lot of room for more dealers, and we’re increasing our sales staff for 2022. We are now fully stocked with the product get the Ionex range going. For the UK we’ve got the i-One and the Agility EV – both are new models.” The i-One is firmly aimed at urbanites, as evidenced by its multiple charging solutions. These include a standard plugin charger, a docking charge station for domestic battery charging, and a fast charger. Also making the i-One city-friendly is its limited top speed of 28mph and range of around 60

miles, depending on use. The long-life lithium battery weighs 10kg and feeds a 4.2kW motor. With a very similar specification, the EV version of Kymco’s popular Agility scooter comes as standard with a large rear rack, aiming it firmly at the delivery market. The final model Bradford is keen to promote to potential dealers is the completely redesigned 2022 Super 8 R sports urban scooter. This model is ‘very street’ and is aimed firmly at the youth market. Colour options are lime green or cherry red. The Euro 5 motor is air-cooled and fuel-injected, and the overall design includes adjustable twin rear shocks and power-pipe style exhaust. Kymco has the scooter market pretty much covered. Apart from those already discussed, 10 more models fill all the popular slots. At the top end, there’s the Sports Touring AK 550 and next comes the Xciting S400. The 125 class includes the X-Town 125 with maxi 