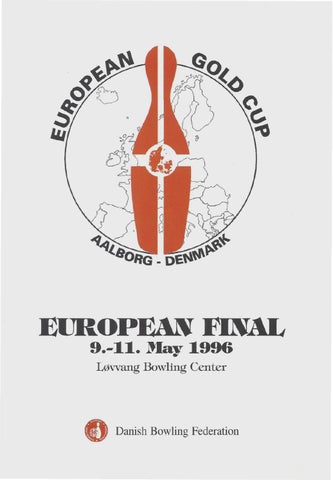 IWelcometo Aoloorq. Denmark One of the most important tournaments is this year hosted by Denmark. The European Gold Cup started in 1979 as the AMF Gold Cup in Coventry, England. A private initiative from Mr. B. Gibbons, Mr. G.H. Caie and Mr. AATh. Ophelders took over the organization in 1986. In 1995 FIQ-WTBA-European Zone became the &quot;owner&quot; of the Gold Cup. The Presidium of the Zone is of the opinion that all members of the European Zone should participate: this tournament is the way to promote the sport of bowling. You are not convinced? Ask the players that had the opportunity to participate, they will tell you! I wish the Danish Federation to sav:

good luck with the organization.

On behalf of the Presidium Ad Ophelders President

GREETINGS FROM THE CITY

WELLCOME On behalf of the city of Aalborg I wellcome all participants and supporters to Aalborg for the European Gold Cup 1996 for bowlers. All the players have qualified in their own countries to reach the European final, and as only one woman and one man participate from each country, it will - without a doubt - give the spectators the possibility of seeing the absolute best bowlingplayers in a championship of this kind. With its 160.000 citizens Aalborg is the 4th largest city in Denmark, and if it is possible for you to leave the bowling center for a couple of hours, Aalborg ean give you many good memories. I would like to mention that Aalborg has some very exiting museums such as the Vikingmuseum at Lindholm HĂ¸je (situated close to the bowling center) and the Art Museum of Nordjylland. If you just need a walk and some fresh air, the heart of Aalborg has a couple of small pedestrian streets and several historicai buildings. Furthermore there are squares, cafes and cosy open places close to the pedestrian precint. The city of Aalborg it well known for doing a lot for sports. During the later years we have honoured many champions for their fine results. Lastyear, for instance, we were able to celebrate the national championship with our Superliga-team in football, MB. I would like to take the opportunity to congratulate the local organization for being the host of the European Gold Cup. It is always nice to see, that a local organization is able to manage a large international event, where about 20 European nations participate. Finally I wish all the bowlingplayers good luck for the championships. Kaj KjĂŚr Mayor, City of Aalborg

WELCOME - THE ORGANIZATION It is always a great pleasure to host a European championship. And as it is the European Gold Cup we are hosting, the pleasure is as great as ever. On behalf of the Danish Bowling Federation I wellcome all plcvers. coaches, officials and supporters from the member countries of the European Zone to Denmark. I hope, that you will all bring back to your home countries a positive impression of Denmark and some good memories as well memories that will always give you pleasure. This year marks the one hundred anniversary of the Danish Sports Con federation. It gives us great pleasure to participate in the celebrations by, amongst other events, organizing the European Gold Cup. Not all participants are able to stand at the top of the rostrum at the end of the cham-pionship, but let us hope, that many good bowling relationships will be created across the boarders and that it is possible to keep those relationships a live, even after the stav in Denmark has come to an end. Wellcome to Aalborg - wellcome to Denmark - wellcome to the European Gold Cup 1996. Arne Hyldekrog President, The Danish Bowling Federation

WELLCOME The European Gold Cup is a very special championship under the aegis of the World Tenpin Bowling Association, European Zone, as the member countries are represented by players, who do not usually appear in championshipcontexts. This lends the European Gold Cup its own character, where the sportting achievement often mingie with the social side on the lones as well as outside. The Organizing Committee and the staff behind this issue of the European Gold Cup therefore look foreward to this task with great expectations. We promise to do our outmost to carry out the championships without any impediments, as this will be the best guarantee for our guests to get som e good and memorable sporting and social experiences to toke home. On behalf of the Organizing Committee I wholeheartedly wellcome plcvers. officials and guests to Aalborg and to the European Gold Cup 1996. I hope, you will all enjoy your stav in the city as well as in the competition area of the LĂ¸wang Bowling Center. Kim Thorsgaard Jensen Chairman of the Organizing Committee

THE ORGANIZATION COMMITTEE President of the Organizing Committee:

HALL OF FAME The previous winners of the European Gold Cups 1977 Antwerpen,

HALL OF FAME The previous winners of the European Gold Cups 1988 Linz, Austria