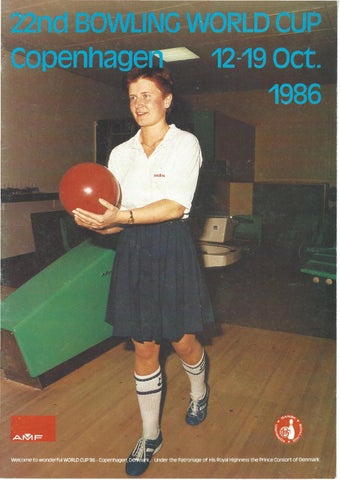 Chairmen of the organizing

GRETE JØRGENSEN - the transport and accommodation

His Royal Highness . the Prince Consort of Denmark Patron of World Cup 1986.

Message On behalf of Dansih Bowling I wish all participates in World Cup Final 1986, welcome to Denmark. This year we have a special and warm, danish welcome to the femaie participates, who, for the firts time, have to meet a World Cup World Final in Denmark. The final for men had earlier been played on Danish ground - namely in 1970. lt is always a challenge to have the responsibility for an arrangement so big as the annual World Cup Final - and when a nation twice get the honour to be host country well, that engaged. But I feel sure, that Denmark will fulfil that obligation, because a big number of people have made an extraordinarv effort (work) to ensure, that World Cup World Final 1986 will be played on a top-professional level. Living up to the standards, we have seen in the earlier finals. It is our goal whish, that every player and the leaders after this worldfinal, will have a positiv mind of Denmark and not least, have the memory, that the 22. BOWLING WORLD CUP was a arrangement, consistent in a good spirit - sporting - social and organizing. Good Luck DANISH BOWLING FEDERATION Jan Donde President

Message Dear Bowlers: Bowling and Copenhagen! What a great combination for a successful 22nd Annual Bowling World Cup. The officers of the Federation Internationale des Quilleurs congratulate you for displaying excellence on the lanes. Qualifying for this great event is an achievement for which you should be very proud. During the week-Iong competition, keep in mind that you not only are bowling for international glory, but you are wearing your country&#39;s colors and displaying sportsmanship which represents your horneland. Meet new friends, renew old acquaintances and enjoy the camaraderie that always has been accentuated in the Bowling World Cup. Good luck to all participants! Very truly yours, ROGER H. TESSMANN President Federation Internationale des Quilleurs

Message On the the occasion of that World Cup World Finals now for the second time in its 22 years, this, most well-known and popular bowling-event, takes place in Denmark. I will salute all participates a hearty welcome to Copenhagen and Rødovre Bowlinghal. World Cup are of great importance for the bowlingsport. With partici pates from all over the world, World Cup create a public relation for our sport, which you cant make up in money. World Cup is more than a tournament, it is for all the participates a memory for life. On behalf of the FIQ European Zone, I want to thank AMF, Danish Bowling Federation and all the members in the committee of organisation, as well as all those, there in one or another way are or has been involved in the arrangement, for the work they have done to organize one of the greatest bowlingcelebration in the world, I wish all the best of luck during the week it takes to carry through World Cup &#39;86.

Message On behalf of AM F,Bowling, I would like to welcome every competitor, guest, and official to the 1986 Bowling World Cup. This is the first time that our tournament has returned to the same center, and we feel proud of the way in which the Bowling World Cup has matured since its initial visit to Rodovre (now renamed the »Bowling World Cup Center«) in 1970.Of course, in those days we did not have a ladies&#39; division, yet this year we will have nearly as many countries proticipating in the women&#39;s section as the men&#39;s, and AMF is delighted that the tournament has played such an effective role in encouraging the participation of femaie bowlers in worldwide events. Additionally, there will be countries making their first appearance in the event this year and, likewise, we are pleased to consider that the Bowling World Cup welcome new nations onto the international scene. Naturally, with the increased competition. the two final winners will have to fight harder than ever before to take home the famous trophies. Therefore, may I congratulate them in advance and also take this opportunity of wishing each and every competitor good luck and a very successful tournament participation. We hope that you all enjoy your stay in Copenhagen and return home with happy memories of the 22nd annual Bowling World Cup. ROBERT J. CONWAY Corporate Vice President Bowling Products

Message Copenhagenhappensto be the city where I grew up and it is with greatpleasurethat I wish you welcome to my old home town. I hopeyou aregoingto enjoy your stayherein Denmark and return home with many happy memories. May I wish you all everysuccessin the Tournament,and all guestsand spectatorsa good time. Sincerely Bent E.Petersen Vice President AMF Bowling Division International

Format of Play The 1986 tournament will comprise a series of eliminations over seven days. Stage 1 - Qualifying

NEW ULTRA ANGLE Hits with extra energy to increase your chances for a strike. New core concept There&#39;s never been a balllike this belore. It combines AMF&#39;s winningest urethane lormula with a whole new core concept that increases your strike potential.

RoUs easler and faster Because ol this new core, the Ultra Angle actually has less resistance to rolling and drives into the pins with greater speed than a conventional ball delivered with the same force. This results in increased pin action that tums more light hits and heavy hits into strikes-effectively widening your strike zone.

The Ultra An~le is new and revolutionary. It&#39;s for you if you re serious about your game and your scores. AMF&#39;s Ultra Angle-a new standard ol bowling ball excellence-at pro shopsonly .

World Cup - We are all in ittogether. Cause, as the preliminary rounds are arranged in this country, the tournament has a message to each of us. Everyone have a chance, maybe not to win, but at least to get through the first step: the local final. Then it gets a little more difficult. Because the winners of the local matches, meets in the so-called zonefinal, taking place in the western an eastern part of the country. And to the festive and always exciting Denmarkfinal, in which the whole tournament is to be settle, are going 8 bowlers of each sex - and only one ean win and make the travel. As a rule far from home - but, this is one of the fascinated things.

World record upon world record One is speaking of world record in proportion to the number of participates when the yearly number of starts are added up. And we are proud of that in Denmark. where World Cup has so big traditions, and stand as one of the main events of the year. World Cup is a integrated part of Danish bowling, the tournament has as headorganizer Danish Bowling Federation, but it is in the opening phases directed by the local unions. World Cup is beginning allready in February, and have the Denmarksfinal in September. A long tournament, yes, but that makes it, in ouropinion, just more attractive to participate in. For all bowlers - and now and then we ean see a very suprisingly winner to the dreamfinal one or another place in the world. Danish triumphs It is an early Sunday morning, autum 1974. Breakfast has just arrived on the table - we are absentminded listen to the morningnews on the radio. Suddenly, something is happening: the speaker informs, that Birgitte Lund from&#39; Denmark has gone to the final i World Cup World Finals in Caracas, Venezuela. More information will come. Get hold of the cigarettes - will the very young dane succeed, and thereby create the untill now greatest sensation. What ean that mean for the whole sport in Denmark? And at 9 o&#39;clock the news came: Danishvictory in Caracas. Birgitte had created the sensation and had conquered Dale Gray, Australien in the final. Something happened in our country: at once a presseenter in Rødovre Bowlinghal was established, so all could have the chance to here more about the breaking of bowIingsport. Radio, TV and the writing press were overflowing and when Birgitte Lund and Jan Donde, who placed himself on a fine 8. place, went home, a very great ovation was waiting. Not a everyday occurrence for a Danish sportsactive on this time. The importance for Danish bowling has kept on, well supported of a long numbers of international placements in the folIowing years. Even to dav there are sent for Birgitte Lund, now named Jensen, when bowling is calling in greater connextions.

Iakarta Thuesday in the World Cup 1980. The World Finals takes place in Iakarta, Indonesia, and we have Johnny Christiansen from »Stenhuset« and Kirsten Christiansen from »Chock« on the alleys. The telephone bell. It is a newspa-

Birgitte Lund in Caracas, just atter the uictory/Birgitte Lund i Caracas lige etter sejren. per, Politiken : »Are there something about, that you have a bowlingplayer in Iakartai« &gt;lYes« - «Well- he is leading the whole tournarnent!« Johnny lead the World Final at a time, where there where 16 players back. And he was standed by! And continued: was between the last 4 and ended up as a fine number 3 in a very hard tournament. Again flowers to Danish bowling with relation to World Cup.

Bogata Birgitte Lund almost did it again. She had in 1978 placed herself to the World Final, taking place in the paradise of pickpockets, Bogota, Colombia. She succeeded getting between the 4 best, and the whole country kept it&#39;s breath this very late Friday evening in 1978. But she stood by as number 4, enough to that we again got spotlights on our sport. Yes,the public is very interested in World Cup, and with excitement we, year after year, have followed the Danish bowlers fight to the pins. It has been dose several times - we havent got numbers on the many placements as number 9, especially our ladies have got. Disappointments? - Yes,but they are all forgotten!

The future As long as something is named World Cup, Danish bowling is on the map! This year on the homealleys in Rødovre Bowlinghal. To the danish bowlers not a great travel, but as Anne Rath said, when she went home from Seoul in 1985: &gt;litis not so rnuch the place of playing, which is most attractive by World Cup. It is the mood and the atmosphere in the week, the tournament is going. You have to experience it, no.rnatter, where it takes place:« World Cup is a world for itself. John Jørgensen

Previous Champions Last Year&#39;s Winners Ireland&#39;s Marjorie McEntee and Mexican Alfonso Rodriguez were the champions of their respective divisions in the Bowling World Cup staged in Seoul, Republic of Korea last year. Marjorie emulated Britain&#39;s Pauline Smith by winning her title the hard way. She went into the step-ladder finals in 5th position and worked her way through Pearly Chong (Malaysia), Yuen-Yue Huang (Chinese Taipei), Annete Hagre (Sweden) and Judy Howlett (Gt. Britain) before emerging triumphant. Alfonso became Mexico&#39;s second tit/e-holder in the tournament&#39;s 21-year history by finishing in the coveted No1 spot when it mattered - the stage before the step-ladder finals. When Dutchman Eric Kok challenged him for the title, Rodriguez did just enough to run out the winner by 206 to 193.

Tournament Records A milestone in the history of the tournament cam e in 1972 when the women&#39;s division was introduced in Hamburg, West Germany. Bowling along-

side the men, the women&#39;s division was instantly popular with allconcerned and became a permanent feature of the tournament. I

Most Tournament Victories By Country U.S.A. - 6

Most Tournament Victories By Player

Most Finals Appearances By Player

Special offer All rates include

For reservation contact the reception. Free delivery to hoteis in Copenhagen. Nyropsgade 6, 1602 Copenhagen V. Phone: 01 133900 - Telex: 27414 budget dk. Order the car through Danish Bowling Association, and you will get 20% discount. Application to the reception.