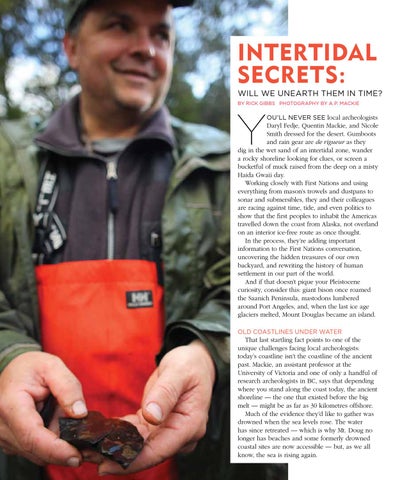 INTERTIDAL SECRETS: Will we unearth them in time? By RICK GIBBS photography by A.P. Mackie

Daryl Fedje, Quentin Mackie, and Nicole Smith dressed for the desert. Gumboots and rain gear are de rigueur as they dig in the wet sand of an intertidal zone, wander a rocky shoreline looking for clues, or screen a bucketful of muck raised from the deep on a misty Haida Gwaii day. Working closely with First Nations and using everything from mason’s trowels and dustpans to sonar and submersibles, they and their colleagues are racing against time, tide, and even politics to show that the first peoples to inhabit the Americas travelled down the coast from Alaska, not overland on an interior ice-free route as once thought. In the process, they’re adding important information to the First Nations conversation, uncovering the hidden treasures of our own backyard, and rewriting the history of human settlement in our part of the world. And if that doesn’t pique your Pleistocene curiosity, consider this: giant bison once roamed the Saanich Peninsula, mastodons lumbered around Port Angeles, and, when the last ice age glaciers melted, Mount Douglas became an island.

Old coastlines under water That last startling fact points to one of the unique challenges facing local archeologists: today’s coastline isn’t the coastline of the ancient past. Mackie, an assistant professor at the University of Victoria and one of only a handful of research archeologists in BC, says that depending where you stand along the coast today, the ancient shoreline — the one that existed before the big melt — might be as far as 30 kilometres offshore. Much of the evidence they’d like to gather was drowned when the sea levels rose. The water has since retreated — which is why Mt. Doug no longer has beaches and some formerly drowned coastal sites are now accessible — but, as we all know, the sea is rising again.