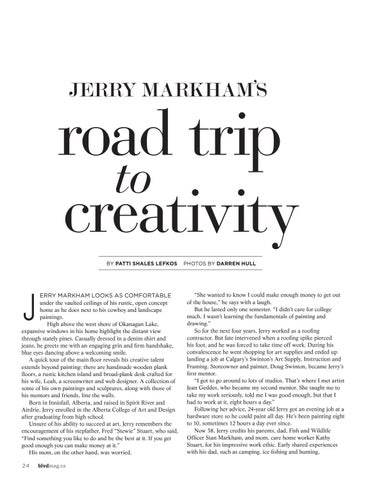 ERRY MARKHAM LOOKS AS COMFORTABLE under the vaulted ceilings of his rustic, open concept home as he does next to his cowboy and landscape paintings. High above the west shore of Okanagan Lake, expansive windows in his home highlight the distant view through stately pines. Casually dressed in a denim shirt and jeans, he greets me with an engaging grin and firm handshake, blue eyes dancing above a welcoming smile. A quick tour of the main floor reveals his creative talent extends beyond painting: there are handmade wooden plank floors, a rustic kitchen island and broad-plank desk crafted for his wife, Leah, a screenwriter and web designer. A collection of some of his own paintings and sculptures, along with those of his mentors and friends, line the walls. Born in Innisfail, Alberta, and raised in Spirit River and Airdrie, Jerry enrolled in the Alberta College of Art and Design after graduating from high school. Unsure of his ability to succeed at art, Jerry remembers the encouragement of his stepfather, Fred “Stewie” Stuart, who said, “Find something you like to do and be the best at it. If you get good enough you can make money at it.” His mom, on the other hand, was worried. 24

“She wanted to know I could make enough money to get out of the house,” he says with a laugh. But he lasted only one semester. “I didn’t care for college much. I wasn’t learning the fundamentals of painting and drawing.” So for the next four years, Jerry worked as a roofing contractor. But fate intervened when a roofing spike pierced his foot, and he was forced to take time off work. During his convalescence he went shopping for art supplies and ended up landing a job at Calgary’s Swinton’s Art Supply, Instruction and Framing. Storeowner and painter, Doug Swinton, became Jerry’s first mentor. “I got to go around to lots of studios. That’s where I met artist Jean Geddes, who became my second mentor. She taught me to take my work seriously, told me I was good enough, but that I had to work at it, eight hours a day.” Following her advice, 24-year old Jerry got an evening job at a hardware store so he could paint all day. He’s been painting eight to 10, sometimes 12 hours a day ever since. Now 38, Jerry credits his parents, dad, Fish and Wildlife Officer Stan Markham, and mom, care home worker Kathy Stuart, for his impressive work ethic. Early shared experiences with his dad, such as camping, ice fishing and hunting, 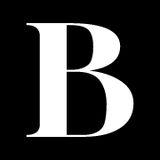