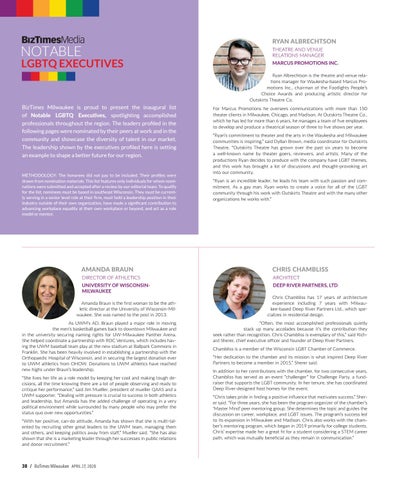 BizTimes Milwaukee is proud to present the inaugural list of Notable LGBTQ Executives, spotlighting accomplished professionals throughout the region. The leaders profiled in the following pages were nominated by their peers at work and in the community and showcase the diversity of talent in our market. The leadership shown by the executives profiled here is setting an example to shape a better future for our region.

METHODOLOGY: The honorees did not pay to be included. Their profiles were drawn from nomination materials. This list features only individuals for whom nominations were submitted and accepted after a review by our editorial team. To qualify for the list, nominees must be based in southeast Wisconsin. They must be currently serving in a senior level role at their firm, must hold a leadership position in their industry outside of their own organization, have made a significant contribution to advancing workplace equality at their own workplace or beyond, and act as a role model or mentor.

For Marcus Promotions he oversees communications with more than 150 theater clients in Milwaukee, Chicago, and Madison. At Outskirts Theatre Co., which he has led for more than 6 years, he manages a team of five employees to develop and produce a theatrical season of three to five shows per year. “Ryan’s commitment to theater and the arts in the Waukesha and Milwaukee communities is inspiring,” said Dyllan Brown, media coordinator for Outskirts Theatre. “Outskirts Theatre has grown over the past six years to become a well-known name by theater goers, reviewers, and artists. Many of the productions Ryan decides to produce with the company have LGBT themes, and this work has brought a lot of discussions and thought-provoking art into our community. “Ryan is an incredible leader, he leads his team with such passion and commitment. As a gay man, Ryan works to create a voice for all of the LGBT community through his work with Outskirts Theatre and with the many other organizations he works with.”

Amanda Braun is the first woman to be the athletic director at the University of Wisconsin-Milwaukee. She was named to the post in 2013. As UWM’s AD, Braun played a major role in moving the men’s basketball games back to downtown Milwaukee and in the university securing naming rights for UW-Milwaukee Panther Arena. She helped coordinate a partnership with ROC Ventures, which includes having the UWM baseball team play at the new stadium at Ballpark Commons in Franklin. She has been heavily involved in establishing a partnership with the Orthopaedic Hospital of Wisconsin, and in securing the largest donation ever to UWM athletics from OHOW. Donations to UWM athletics have reached new highs under Braun’s leadership. “She lives her life as a role model by keeping her cool and making tough decisions, all the time knowing there are a lot of people observing and ready to critique her performance,” said Jim Mueller, president of mueller QAAS and a UWM supporter. “Dealing with pressure is crucial to success in both athletics and leadership, but Amanda has the added challenge of operating in a very political environment while surrounded by many people who may prefer the status quo over new opportunities.” “With her positive, can-do attitude, Amanda has shown that she is multi-talented by recruiting other great leaders to the UWM team, managing them and others, and keeping politics away from staff,” Mueller said. “She has also shown that she is a marketing leader through her successes in public relations and donor recruitment.”

Chris Chambliss has 17 years of architecture experience including 7 years with Milwaukee-based Deep River Partners Ltd., which specializes in residential design. “Often, the most accomplished professionals quietly stack up many accolades because it’s the contribution they seek rather than recognition. Chris Chambliss is exemplary of this,” said Richard Sherer, chief executive officer and founder of Deep River Partners. Chambliss is a member of the Wisconsin LGBT Chamber of Commerce. “Her dedication to the chamber and its mission is what inspired Deep River Partners to become a member in 2015,” Sherer said. In addition to her contributions with the chamber, for two consecutive years, Chambliss has served as an event “challenger” for Challenge Party, a fundraiser that supports the LGBT community. In her tenure, she has coordinated Deep River-designed host homes for the event. “Chris takes pride in finding a positive influence that motivates success,” Sherer said. “For three years, she has been the program organizer of the chamber’s ‘Master Mind’ peer mentoring group. She determines the topic and guides the discussion on career, workplace, and LGBT issues. The program’s success led to its expansion in Milwaukee and Madison. Chris also works with the chamber’s mentoring program, which began in 2019 primarily for college students. Chris’ expertise made her a great fit for a student considering a STEM career path, which was mutually beneficial as they remain in communication.” 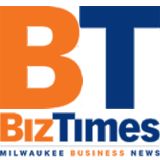