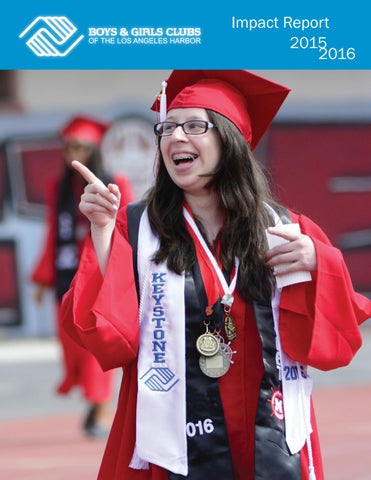 Dear Friends, You are receiving this annual report due to your generous support as we begin our 80th year of serving the youth of our Los Angeles Harbor community. One of the oldest Boys & Girls Clubs in California, in 1937 the Boys Club of San Pedro was established by the San Pedro Civitan Club as local businessmen were desperate for positive alternatives for boys who were on the streets and negatively impacting their establishments. Since its inception, the organization has stayed true to its mission to enable all young people, especially those who need us most, to reach their full potential as productive, caring, and responsible citizens. We achieve this through quality programs and services in an environment that is safe, nurturing and inspiring. Many accomplishments were soon to follow including becoming an official Boys & Girls Club in 1994. Our name changed again not long after when we collaborated with the Port of LA to open our Port of LA Boys & Girls Club next to the Rancho San Pedro public housing community in 2001 and merged with the Wilmington Boys & Girls Club in 2004 to become the Boys & Girls Clubs of the Los Angeles Harbor. Through these years we started many programs that continue to help youth succeed today including College Bound pathway, the Arts Academy and our new Career Bound program. NONE of this would be possible without the generosity of our individual donors, corporate sponsors, private foundations and support from our elected officials. As an alumnus and “Club Kid” myself – I thank all of you for 80 years of support. I urge you to continue your investment in “those who need us most” and make this 80th Anniversary year a true “Year of the Child.” Mike Lansing, Executive Director

On behalf of the Board of Directors, and the entire organization, I am happy to present the 20152016 Annual Report for the Boys & Girls Clubs of the Los Angeles Harbor. This also gives me a chance to express my tremendous gratitude for your support. Foundations, local businesses and corporations, individuals and volunteers have generously given time, services and financial resources that truly allow us to do what we do. The results can be seen within this report. From tutoring and college-readiness, to performing and fine arts, from video and music labs to science and robotics, from organized sports to time just to play and have fun – the Club provides space and opportunities for kids from kindergarten through high school to grow and explore, learn and be kids. As we head into our 80th year, we will be celebrating our growth and successes. The Club looks nothing like it did 80 though ago, though our mission remains to serve the kids who need us most. We would love to show you what goes on inside the Club, and welcome you to come for a visit. We think you will be as inspired as we are. As I thank you for your support, I also want to thank our incredible staff who make this all happen. Donors, friends, management and staff make for a pretty spectacular team. Thank you! Tamara Powers, Board President

L.A. Harbor children living in households below the poverty level.

65% of L.A. Harbor public schools have an Academic Performance Index (API) Ranking of 6 out of 10 or lower. *LAUSD reporting

27% of residents 18 and older have less than a high school diploma. *2015 American Community Survey

Gang injunctions in the harbor area alone with a medium to high crime rate according to the LAPD.

“Without my Boys & Girls Club, I would have never even thought of the things I am involved in today.” Today, as the first in his family to go to college, our 2016 Youth of the Year, Uriel Castillo is a freshman at California State University, Northridge studying Mechanical Engineering. But his road to success required a lot of hard work that we were happy to support. Uriel was just 9 years old when he walked into the Port of L.A. Boys & Girls Club for the first time. He started attending daily, the Club directly across the street from the Rancho San Pedro public housing community where he grew up. Through the years, Uriel joined our Keystone community service group, gained much help through College Bound, served on Mayor Garcetti’s Youth Council and completed an internship in L.A. City Councilman Joe Buscaino’s office. In 2016, when Phillips 66 sponsored our STEM Makers Studio at our Port of L.A. Club complete with five 3D printers, a laser cutter and brand new computers for our youth, Uriel found a place where he could apply his knowledge of math and engineering and bring his designs to life. He also found another way to give back to the Club by tutoring younger members in STEM education. Like many of our former Youths of the Year, Uriel continues to give back to his community and returns to the Club to mentor and support younger members. 6

“I never got to experience what I experienced at the Club before.”

By the time, Isaac Benavidez first started attending our Wilmington Boys & Girls Club at age 14, he was a beginning level guitar player with a few songs under his belt, but the Club offered him something that Isaac never had the opportunity to do before - play with fellow young musicians in a band. Our Arts Academy music program has allowed Isaac to grow and develop his skills performing as part of a group, reading music charts, understanding musical concepts and terminology and recognizing proper technique. He has had countless opportunities to share his talent with an audience at several Club and community events with our bands. During his time in our Club, Isaac has increased his repertoire and discovered new musical genres he never played before. His favorites right now are Blues, Punk Rock and Heavy Metal. The Club also gave him the opportunity to experiment with other instruments. He is now developing his talents as a drummer. Isaac feels that the Club, “changed his music career,” and made the experience more fun and valuable. Isaac will graduate from Phineas Banning High School in 2017 and will move on from the Club, but plans to continue learning and playing music as he goes to college.

Athletics Strength in Health and Character

Although he was born in the United States, Jose Palafox was raised in Mexico and faced many challenges when returning at the age of 9 with hopes of working toward a great future. Soon after enrolling in school, Jose began attending the San Pedro Boys & Girls Club as a safe place to go after class because his mother had to work two jobs to support them. Jose was welcomed by Club staff who helped him with his English and introduced him to programs. He immediately took to our soccer league and made many friends on the team. He was so dedicated to the program that when our league was struggling to attract new members, Jose elected himself as league promoter and advertised the program at his middle school and around the community. Years later, it was no surprise to us when he was named captain of the San Pedro High School varsity soccer team. Although Jose was passionate about soccer, he found true guidance in our College Bound program. With the support of our case managers he graduated from San Pedro High School in 2016 with a GPA surpassing 4.0. He was awarded scholarships through College Bound’s partnerships with the College Access Foundation and Toyota Financial Services. Jose earned a great deal of financial aid with the help of our case managers guiding him. As the first in his family to go to college, Jose attends UC Irvine and majors in Engineering. Athletics continue to drive him and he plays for the club soccer team at his university. He returns to the Club during his breaks to share his experience and advice with our teens.

“I am extremely fortunate to be part of an organization that contributes to the well being of our growing community in countless ways.”

“The Club is a place where many students like myself can discover certain principles and qualities we are unable to perceive on our own.” Marlyn Angeles is a proud Matador at California State University, Northridge, but she makes plenty of time to return to San Pedro and visit what she considers her second home, our Port of L.A. Boys & Girls Club. Marlyn started attending our Port Club in elementary school. There she found guidance as a safe place between school and her home in the Rancho San Pedro public housing community. Through the years she was involved in many programs including soccer and our Keystone community service group. She was even selected as our 2015 Port Club Youth of the Year. Marlyn was an excellent high school student. She graduated from Harbor Teacher Preparation Academy with her high school diploma and several units of college credit. However, with few resources and little support from her family, Marlyn didn’t think she had many options beyond high school. Our College Bound showed her the path to follow. Through several years of guidance in College Bound, Marlyn attended multiple workshops, toured college campuses, and received crucial 1-on-1 support in completing her college and financial aid applications. We were proud to award Marlyn a scholarship as our Youth of the Year and a College Access Foundation scholarship at our 2016 College Bound Celebration.

“I love music. And getting to work with the kids on their tracks...I just kept coming back.”

Two time All-American and former professional basketball player Moe Ager first came to the San Pedro Boys & Girls Club to volunteer in our basketball program, but during his introductory tour of the Club, he was surprised to find our audio recording studio. On top of his athletic talents, Moe is also a music producer and has developed his skills since he was a teen like our members. It wasn’t long before Moe was visiting the Club as a volunteer every week to help our middle and high school members take their next steps in mixing and mastering. During the 2015/2016 school year, Moe completed 250 volunteer service hours. High school member, Partyush S., received a lot of help from Moe in refining his abilities and developing his musical instincts. He has been learning and creating in the studio since he was in 7th grade and felt he was able to get to the next level with Moe as his mentor.

Thanks Moe! If you would like to share your talents, experience and advice with our members, we want to hear from you. Please visit

Youth by the numbers CHART TITLE

Supporting Foundations During the fiscal year ending on June 30, 2016. 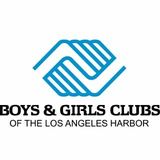