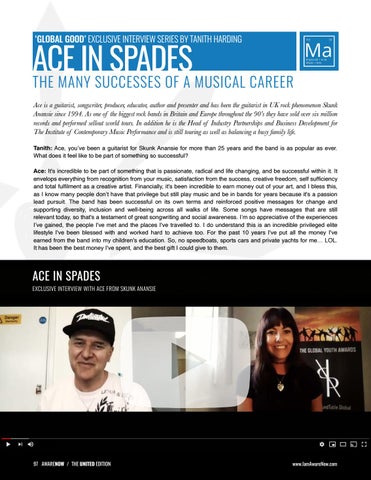 THE MANY SUCCESSES OF A MUSICAL CAREER Ace is a guitarist, songwriter, producer, educator, author and presenter and has been the guitarist in UK rock phenomenon Skunk Anansie since 1994. As one of the biggest rock bands in Britain and Europe throughout the 90’s they have sold over six million records and performed sellout world tours. In addition he is the Head of Industry Partnerships and Business Development for The Institute of Contemporary Music Performance and is still touring as well as balancing a busy family life.

Tanith: Ace, you’ve been a guitarist for Skunk Anansie for more than 25 years and the band is as popular as ever. What does it feel like to be part of something so successful?

Ace: It&#39;s incredible to be part of something that is passionate, radical and life changing, and be successful within it. It envelops everything from recognition from your music, satisfaction from the success, creative freedom, self sufficiency and total fulfilment as a creative artist. Financially, it&#39;s been incredible to earn money out of your art, and I bless this, as I know many people don’t have that privilege but still play music and be in bands for years because it&#39;s a passion lead pursuit. The band has been successful on its own terms and reinforced positive messages for change and supporting diversity, inclusion and well-being across all walks of life. Some songs have messages that are still relevant today, so that&#39;s a testament of great songwriting and social awareness. I’m so appreciative of the experiences I’ve gained, the people I&#39;ve met and the places I&#39;ve travelled to. I do understand this is an incredible privileged elite lifestyle I&#39;ve been blessed with and worked hard to achieve too. For the past 10 years I&#39;ve put all the money I&#39;ve earned from the band into my children&#39;s education. So, no speedboats, sports cars and private yachts for me… LOL. It has been the best money I&#39;ve spent, and the best gift I could give to them.