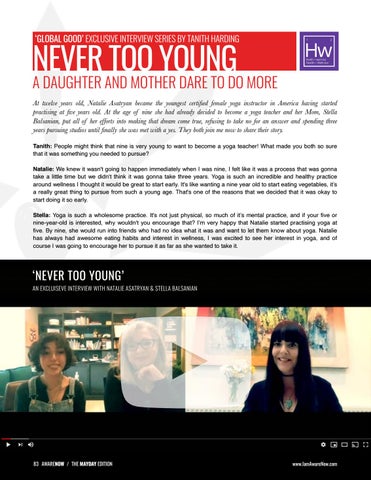 A DAUGHTER AND MOTHER DARE TO DO MORE At twelve years old, Natalie Asatryan became the youngest certified female yoga instructor in America having started practising at five years old. At the age of nine she had already decided to become a yoga teacher and her Mom, Stella Balsanian, put all of her efforts into making that dream come true, refusing to take no for an answer and spending three years pursuing studios until finally she was met with a yes. They both join me now to share their story.

Tanith: People might think that nine is very young to want to become a yoga teacher! What made you both so sure that it was something you needed to pursue?

Natalie: We knew it wasn't going to happen immediately when I was nine, I felt like it was a process that was gonna take a little time but we didn't think it was gonna take three years. Yoga is such an incredible and healthy practice around wellness I thought it would be great to start early. It's like wanting a nine year old to start eating vegetables, it’s a really great thing to pursue from such a young age. That's one of the reasons that we decided that it was okay to start doing it so early.

Stella: Yoga is such a wholesome practice. It's not just physical, so much of it’s mental practice, and if your five or nine-year-old is interested, why wouldn't you encourage that? I’m very happy that Natalie started practising yoga at five. By nine, she would run into friends who had no idea what it was and want to let them know about yoga. Natalie has always had awesome eating habits and interest in wellness, I was excited to see her interest in yoga, and of course I was going to encourage her to pursue it as far as she wanted to take it.