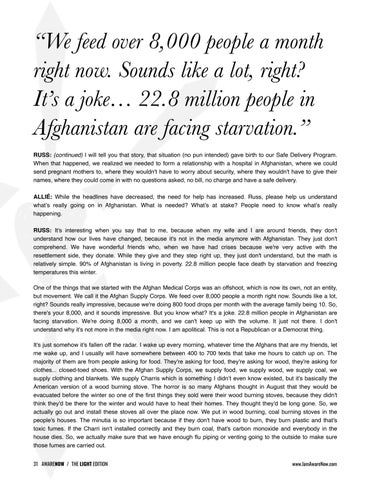 “We feed over 8,000 people a month right now. Sounds like a lot, right? It’s a joke… 22.8 million people in Afghanistan are facing starvation.” RUSS: (continued) I will tell you that story, that situation (no pun intended) gave birth to our Safe Delivery Program. When that happened, we realized we needed to form a relationship with a hospital in Afghanistan, where we could send pregnant mothers to, where they wouldn&#39;t have to worry about security, where they wouldn&#39;t have to give their names, where they could come in with no questions asked, no bill, no charge and have a safe delivery.

ALLIÉ: While the headlines have decreased, the need for help has increased. Russ, please help us understand what’s really going on in Afghanistan. What is needed? What’s at stake? People need to know what’s really happening.

RUSS: It&#39;s interesting when you say that to me, because when my wife and I are around friends, they don&#39;t understand how our lives have changed, because it&#39;s not in the media anymore with Afghanistan. They just don&#39;t comprehend. We have wonderful friends who, when we have had crises because we&#39;re very active with the resettlement side, they donate. While they give and they step right up, they just don&#39;t understand, but the math is relatively simple. 90% of Afghanistan is living in poverty. 22.8 million people face death by starvation and freezing temperatures this winter.

One of the things that we started with the Afghan Medical Corps was an offshoot, which is now its own, not an entity, but movement. We call it the Afghan Supply Corps. We feed over 8,000 people a month right now. Sounds like a lot, right? Sounds really impressive, because we&#39;re doing 800 food drops per month with the average family being 10. So, there&#39;s your 8,000, and it sounds impressive. But you know what? It&#39;s a joke. 22.8 million people in Afghanistan are facing starvation. We&#39;re doing 8,000 a month, and we can&#39;t keep up with the volume. It just not there. I don&#39;t understand why it&#39;s not more in the media right now. I am apolitical. This is not a Republican or a Democrat thing.

It&#39;s just somehow it&#39;s fallen off the radar. I wake up every morning, whatever time the Afghans that are my friends, let me wake up, and I usually will have somewhere between 400 to 700 texts that take me hours to catch up on. The majority of them are from people asking for food. They&#39;re asking for food, they&#39;re asking for wood, they&#39;re asking for clothes... closed-toed shoes. With the Afghan Supply Corps, we supply food, we supply wood, we supply coal, we supply clothing and blankets. We supply Charris which is something I didn’t even know existed, but it&#39;s basically the American version of a wood burning stove. The horror is so many Afghans thought in August that they would be evacuated before the winter so one of the first things they sold were their wood burning stoves, because they didn&#39;t think they&#39;d be there for the winter and would have to heat their homes. They thought they&#39;d be long gone. So, we actually go out and install these stoves all over the place now. We put in wood burning, coal burning stoves in the people&#39;s houses. The minutia is so important because if they don&#39;t have wood to burn, they burn plastic and that&#39;s toxic fumes. If the Charri isn&#39;t installed correctly and they burn coal, that&#39;s carbon monoxide and everybody in the house dies. So, we actually make sure that we have enough flu piping or venting going to the outside to make sure those fumes are carried out. 31 AWARENOW / THE LIGHT EDITION