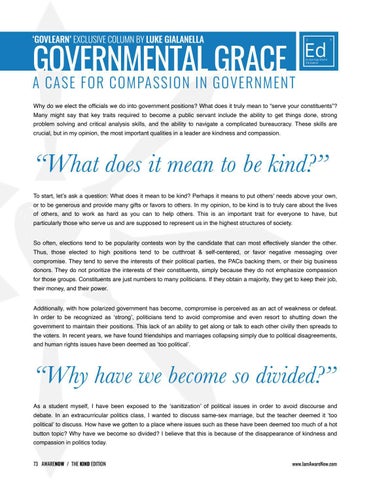 A CASE FOR COMPASSION IN GOVERNMENT Why do we elect the officials we do into government positions? What does it truly mean to “serve your constituents”? Many might say that key traits required to become a public servant include the ability to get things done, strong problem solving and critical analysis skills, and the ability to navigate a complicated bureaucracy. These skills are crucial, but in my opinion, the most important qualities in a leader are kindness and compassion.

“What does it mean to be kind?”

To start, let’s ask a question: What does it mean to be kind? Perhaps it means to put others&#39; needs above your own, or to be generous and provide many gifts or favors to others. In my opinion, to be kind is to truly care about the lives of others, and to work as hard as you can to help others. This is an important trait for everyone to have, but particularly those who serve us and are supposed to represent us in the highest structures of society.

So often, elections tend to be popularity contests won by the candidate that can most effectively slander the other. Thus, those elected to high positions tend to be cutthroat &amp; self-centered, or favor negative messaging over compromise. They tend to serve the interests of their political parties, the PACs backing them, or their big business donors. They do not prioritize the interests of their constituents, simply because they do not emphasize compassion for those groups. Constituents are just numbers to many politicians. If they obtain a majority, they get to keep their job, their money, and their power.

Additionally, with how polarized government has become, compromise is perceived as an act of weakness or defeat. In order to be recognized as ‘strong’, politicians tend to avoid compromise and even resort to shutting down the government to maintain their positions. This lack of an ability to get along or talk to each other civilly then spreads to the voters. In recent years, we have found friendships and marriages collapsing simply due to political disagreements, and human rights issues have been deemed as ‘too political’.

“Why have we become so divided?”

As a student myself, I have been exposed to the ‘sanitization’ of political issues in order to avoid discourse and debate. In an extracurricular politics class, I wanted to discuss same-sex marriage, but the teacher deemed it ‘too political’ to discuss. How have we gotten to a place where issues such as these have been deemed too much of a hot button topic? Why have we become so divided? I believe that this is because of the disappearance of kindness and compassion in politics today. 73 AWARENOW / THE KIND EDITION