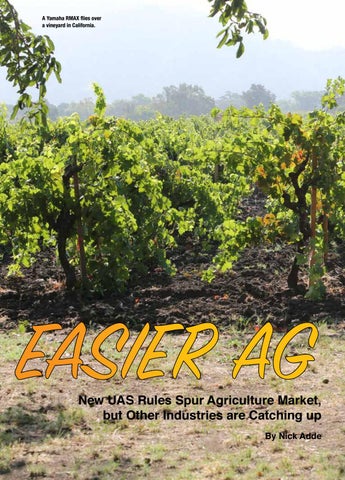 A Yamaha RMAX flies over a vineyard in California.

New UAS Rules Spur Agriculture Market, but Other Industries are Catching up By Nick Adde

At the Hayden, Idaho-based Empire Unmanned LLC, a drone-service provider, president Brad Ward says that agriculture still provides the company with its largest customer base. That scenario is changing, however. Surveying, engineering, mining, forestry and service infrastructure are rapidly assuming a greater share of their market, he says. “Last year, we did about 65 percent agriculture. This year, it’s about 40 percent,” Ward says. “Agriculture is in a bit of a downturn. Still, we actually sold more agriculture this year than last year, but the other industries have caught up. We almost tripled sales from last year, from the other industries,” Ward says. For its missions, Empire flies the Swiss-built senseFly eBee UAS. Weighing about a pound and half,

the fixed-wing aircraft is robust enough to negotiate winds in the Pacific Northwest that can exceed 27 knots, and is generally impervious to rain. Its payloads can provide the owners of irrigated farms that grow onions, carrots, sweet potatoes, potatoes, lentils, and some grains like wheat with information they need to solve problems that may arise, Ward says. Ground-based operators can control flight themselves, or send the aircraft on pre-programmed missions, using Microsoft Surface tablets as controllers. Once aloft, the UAS compile data through straight infrared survey and providing photomosaic global positioning system imagery of entire fields. The UAS provide farmers with a normalized difference vegetation index (NDVI), which, simply put, is a numerical assessment of their crops’ condition, using data compiled through the use of visible and infrared light. The new regulations have helped the company do its job for customers, Ward says — to a point. It is now easier to respond to customers more quickly. “Under the old regulations, we had to file a plan with the FAA [Federal Aviation Administration] 48 hours in advance. Customers would ask, ‘Can you come tomorrow?’ I’d say no,” Ward says. “Now, if customers call today, I can say I’m on my way,” he says. Last year, before the new guidelines came out, a customer wanted Empire to survey its wheat-seed test plots — which just happened to directly abut the perimeter fence of the Walla Walla, Washington, airport. The company filed a Certificate of Waiver or Authorization request with the FAA in March, months before the flights

would have to be conducted. “The government granted us the exemption to [FAA regulation] 333,” which addresses who can and cannot fly in U.S. airspace, said Steve Edgar, a partner with Ward at Empire and former president of ADAVSO (Advanced Aviation Solutions), a company Empire recently acquired. Hence, the COA-application process that ensued. The request became mired in a bureaucratic chain that involved sign-offs by FAA officials in Walla Walla, Seattle, and FAA headquarters in Washington, D.C., before getting final approval six months later — at the end of the growing season. “We had applied for it in March, long before the customer needed it. We didn’t get approval until just before the rules came out. By then, they’d already cut the wheat. We missed four or five visits to that field to watch their test scans grow, because of the laborious process,” Ward says. Now, getting approval simply would involve touching base with the local control agency, in this case, the tower at Walla Walla, Ward says. Rule changes also simplified the process for obtaining remote-pilot certificates. At Empire, and the predecessor drone company ADAVSO, many of its operators flew batteryoperated small drones in the armed forces. Both Ward and Edgar are former Air Force pilots, with considerable experience operating both human and robotic aircraft. Even though many potential employees had acquired hundreds of hours of flight involving thousands of sorties, the experience meant nothing to the FAA. “We couldn’t use them because they didn’t have private pilot licenses,” said Ward. “Now we can. We can afford

With the advent of rules that now allow the proliferation of UAS use, companies that heretofore had eyes on penetrating the agriculture business are getting the chance to assess how their investments in time, focus, and equipment are affecting their bottom line. The short answer: So far so good, with some qualification in order. For one relatively small company in the Pacific Northwest, its initial focus on agricultural clientele is shifting. While the work is still out there in the fields, other potentially more lucrative contracts are emerging in other areas of the economy. And for one corporate giant, the looser rules finally have enabled it to bring a marquee product into the U.S. marketplace and hopefully prove to American customers what farmers in other countries already know.

An Empire Unmanned SUAS prepares to fly over a vineyard.

to get them the training” they need for certification. “It really opens up our pool of available talent,” he said. Agriculture became one of the first industries to take advantage of the FAA’s relaxation of drone-flight requirements because missions tend to take place in unpopulated areas with uncongested airspace. As such, it seemed obvious at first for both farmers and drone operators to embrace the emerging marketplace. 28 |

As the marketplace emerged, though, some characteristics began to manifest themselves. Farmers and fliers alike are having to tweak their expectations as a result. Specifically, farmers have to understand how to sort through the reams of available data and determine what is useful and what is not. Also, drone companies and farmers have had to come to terms with a reasonable price structure, which would make eco-

nomic sense to both parties. “Pretty pictures don’t do anything for businesses. Just gathering imagery is not a good business model. You need to have good GIS [geographical information services] people,” says Edgar. Sensor technology now can tell farmers where their crops are stressed, down to a resolution of three centimeters. UAS flights can determine if the stressors are related to issues with pests, soil, water, weeds, or any other factors. “If I tell them a specific problem, then they know what the specific remedy is and can [mitigate it] remotely through scheduling of water, fertilizer or pesticides,” Edgar says. Farmers, however, must determine if such services are viable. Their business centers upon cost per acre. Once that cost gets up to, say, the five-dollar-per-acre mark, farmers have little choice but to turn elsewhere for the information they need. “Costs now are so high that they [can be] prohibitive [for farmers]. Operators of drones wouldn’t be able to charge enough money to make up for the cost of equipment they need,” Edgar says. On the other hand, the profit margins are not nearly as tight for the emerging client base in the surveying, mining, engineering, roads-analysis and seafood-farming industries. As such, Edgar says, those avenues are rising while agriculture is flat. uuu

Meanwhile, the new FAA guidelines finally have opened the U.S. marketplace to the RMAX unmanned helicopter. Developed by Japan’s Yamaha Motor Corp. in 1997, some

2,400 company-owned and operated RMAX helicopters have been providing assistance to farmers elsewhere in the world ever since. To date, the company has been deploying the RMAX in the vineyards of California’s Napa and Sonoma valleys, having acquired an FAA Section 333 exemption in May 2015. Like Empire, Yamaha had to jump through bureaucratic hoops at both the federal and state levels before RMAX ever took to the air. Brad Anderson, manager of Yamaha’s U.S. unmanned systems division in Cypress, California, says the company again had to petition the FAA for another waiver, this time to allow it to dispense what is known bureaucratically as “economic poison.” In lay terms, Yamaha and the grape growers wanted to use RMAX to dispense pesticides and chemicals. That approval eventually came, as did further certification as a licensed pest-control

business by the state of California. Also, like other UAS used in agriculture, RMAX can be expensive for farmers with tight profit margins. While purchase prices can fall into the five- and six-figure ballpark, Anderson points out that the aircraft are not for sale. He also said that a pricing schedule for contracts is still in the formative stages, and as such could not provide more details. “It’s not a fit for every situation,” says Anderson. “That’s the reason why we started in Napa and Sonoma. Those areas are a little challenging for spraying.” Weighing a little more than 200 pounds, it can carry a payload of 4.2 gallons. Human crews that conduct spraying operations must walk the fields, often over arduous terrain, carrying heavy backpacks with spraying equipment. A four-person crew could take an hour to spray one acre. RMAX,

in contrast, can spray two to six acres in one hour. Its three-person crews include a pilot and a visual observer, the latter situated downrange, both able to remain in contact with each other via radio. The third crewmember handles the chemical payload. By the middle of this year’s wine growing season, three-person Yamaha RMAX teams were able to fly their first 10 spray operations in Napa, Anderson says. “We plan to have a fully operational team in place for the 2017 season,” Anderson says. The company also is exploring possible new U.S. avenues for RMAX, but those are unclear at this time, Anderson says. “Obviously now, our focus is on agriculture,” Anderson says. “But we do definitely believe that there [could be] other applications where RMAX is a good fit.” 

Farmers are using new UAS rules to spur production, but other industries are catching up.

Farmers are using new UAS rules to spur production, but other industries are catching up.