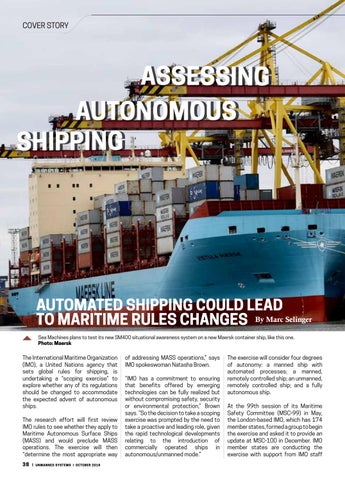 AUTOMATED SHIPPING COULD LEAD TO MARITIME RULES CHANGES By Marc Selinger Sea Machines plans to test its new SM400 situational awareness system on a new Maersk container ship, like this one. Photo: Maersk

The International Maritime Organization (IMO), a United Nations agency that sets global rules for shipping, is undertaking a “scoping exercise” to explore whether any of its regulations should be changed to accommodate the expected advent of autonomous ships. The research effort will first review IMO rules to see whether they apply to Maritime Autonomous Surface Ships (MASS) and would preclude MASS operations. The exercise will then “determine the most appropriate way 38

of addressing MASS operations,” says IMO spokeswoman Natasha Brown. “IMO has a commitment to ensuring that benefits offered by emerging technologies can be fully realized but without compromising safety, security or environmental protection,” Brown says. “So the decision to take a scoping exercise was prompted by the need to take a proactive and leading role, given the rapid technological developments relating to the introduction of commercially operated ships in autonomous/unmanned mode.”

The exercise will consider four degrees of autonomy: a manned ship with automated processes; a manned, remotely controlled ship; an unmanned, remotely controlled ship; and a fully autonomous ship. At the 99th session of its Maritime Safety Committee (MSC-99) in May, the London-based IMO, which has 174 member states, formed a group to begin the exercise and asked it to provide an update at MSC-100 in December. IMO member states are conducting the exercise with support from IMO staff

Eliminating human living facilities would free up room for more cargo. The U.S. Coast Guard, the lead federal agency in IMO negotiations, welcomes the exercise because existing regulations were “written with an underlying assumption that a human mariner would be physically present and actively engaged in operations,” says Lt. Chris Rabalais of the Coast Guard Office of Design & Engineering Standards. “The Coast Guard, recognizing that the emerging technologies have the potential to enhance safety and resiliency in the maritime transportation system, is a strong supporter of the regulatory scoping exercise,” Rabalais says. “As to whether IMO regulations should be changed, this is the exact question we hope is answered through the regulatory scoping exercise.” AUVSI Advocates On the advocacy front, this summer AUVSI launched an Unmanned Maritime Systems Advocacy Committee that will focus on policy positions to support industry advancement. The committee is chaired by Thomas Reynolds, the vice president of business development for Hydroid/Kongsberg Maritime. The vice chair is Wayne Prender, vice president for applied technology and advanced programs at Textron Systems. The committee includes representatives from BAE Systems, L3 Technologies, Leidos, Lockheed Martin, Northrop Grumman, Seaborn Defense and Cherokee Nation Technologies.

and input from intergovernmental and non-governmental organizations. The IMO expects to finish the exercise by 2020. The results are “likely to lead to some kind of work plan,” Brown says. Developing and implementing such a plan would take years, according to Sean Pribyl, a maritime attorney at the Blank Rome LLP law firm in Washington, D.C. The regulations that will be examined include the International Convention for the Safety of Life at Sea (SOLAS)

and the Convention on the International Regulations for Preventing Collisions at Sea (COLREG). While SOLAS requires that ships be adequately manned to ensure safety, it “does have provisions allowing for trials and development of novel ship styles, so as not to impede research,” Brown explains. While most autonomous work today involves small boats, the shipping industry foresees many benefits from shrinking or removing crews on its vessels, including reduced personnel costs and fewer risks of human error.

Among its policy priorities is to collaborate with ship owners, operators, shipyards, ports, federal maritime agencies, technology developers, classification societies and academia to further integrate advanced automation for maritime platforms. “Unmanned maritime systems allow military and commercial operators alike to go farther and deeper than ever before,” says AUVSI President and CEO Brian Wynne. “The input provided by the UMS Advocacy Committee will help us speak with a unified voice and enable all our members to advocate for the growth of the industry.”

‘Modern day space race’ While the IMO tackles the regulatory issues and AUVSI ramps up its advocacy work, U.S. and foreign firms are working feverishly to make autonomous vessels a technological reality. “It’s almost like a modern-day space race,” especially in maritime-focused northern Europe, Pribyl says. Industry representatives are optimistic that the IMO exercise will help, not hinder, their efforts. Thiru Vikram, chief executive officer of Buffalo Automation, based in upstate New York, says he hopes the exercise confirms that existing regulations permit autonomous vessels. “We are delighted that the IMO is being proactive on this topic and believe that the scoping exercise is heading in the right direction,” Vikram says. “We would like the IMO to confirm that lookout requirements can be fulfilled by machines and/or remote human operators.” The company’s existing product, AutoMate, provides situational awareness and decision support to a ship’s human bridge team. It can spot potential hazards, such as other ships and floating debris, with more precision and reliability than human lookouts can, Vikram says. AutoMate includes thermal cameras, highly sensitive microphones, frequency-modulated continuous wave (FMCW) radar and light detection and ranging (lidar), all mounted on a pole-like sensor mast. The sensors are integrated with “proprietary neural networks” that have been “trained” with data from potential navigation scenarios. Buffalo Automation plans to introduce a fully autonomous navigation system once the IMO and the classification societies that set ship technical standards “establish a framework to govern autonomous vessels,” Vikram says.

Like Vikram, Phil Bourque, director of business development at Sea Machines, welcomes the IMO exercise. It is “a necessary step in the groundwork required to take implementation of autonomous technology beyond ‘test beds,’” Bourque says. “Our opinion is that the proper classification of autonomous vessels should establish clear, comprehensive, standards on hardware/software of control systems as well as communications. The hardware and software standards should vary according to the level of autonomy employed.” Sea Machines, based in Boston, announced in April that it will test its new artificial intelligence-powered SM400 situational awareness system on a new container ship provided by Danish ship operator A.P. Moller-Maersk. The trials are expected to take place in the Baltic Sea in the fourth quarter of 2018. The SM400, which incorporates computer vision, lidar and perception software, will make ship operations safer by collecting “a continuous stream of information from a vessel’s environmental surroundings,” thereby removing “the lineof-sight restriction from the bridge,” Sea Machines says. The SM400 will also provide “the infrastructure for a future autonomous collision avoidance system,” the company adds. 40

Taking to the water A United Kingdom team led by Rolls-Royce says its MAchine eXecutable Collision regulations for Marine Autonomous Systems (MAXCMAS) research project showed that unmanned ships could operate safely in international waters. During the $1.7-million project, which was funded by the British government, new collision avoidance software was tested on a Warsash Maritime Academy commercial ship bridge simulator, then at sea aboard an Atlas Elektronik UK (AEUK) ARCIMS unmanned surface vessel. “The trials showed that an unmanned vessel is capable of making a collision avoidance judgment call even when the give-way vessel isn’t taking appropriate action,” says Ralph Dodds, AEUK program manager for innovation and autonomous systems. “What MAXCMAS does is make the collision avoidance regulations applicable to the unmanned ship.” In May 2017, agricultural company Yara and maritime technology firm Kongsberg, both of Norway, announced that they would partner to pursue the Yara Birkeland, the world’s first autonomous and fully electric container vessel. The 261-foot-long ship is named after Yara’s founder, Kristian Birkeland.

The International Maritime Organization is headquartered in London. Photo: IMO

In August 2018, Yara and Kongsberg revealed that Vard, a Fincantieri company based in Norway, will build the V-shaped hull in Romania and deliver the ship in early 2020. Kongsberg will provide the sensors and integration needed to enable remote and autonomous operations. Vard received a contract worth the equivalent of $30 million USD. Enova, a Norwegian government enterprise that promotes renewable energy, has contributed about $16 million to the project. The ship will be manned initially and transition to fully autonomous operation by 2022. Kongsberg says the ship, which will run on batteries charged by hydropower, will routinely transport cargo from Yara’s fertilizer plant in southern Norway to the Norwegian ports of Brevik and Larvik, slashing harmful emissions produced by diesel-fuel trucks. Although the ship will operate in Norwegian, not international, waters, it could inform the IMO proceedings. At MSC-99, Norway presented a paper on the Yara Birkeland which argues that regulations should not be an obstacle to autonomous technology, 42

which promises to benefit the entire maritime world. “It is not possible to say exactly how the future of shipping will look,” the paper says. “However, autonomous and unmanned ships will be a disruptive technology and a driving force for environmental change and sustainability by enabling new types of transport systems with new operators to enter the market.” Sensing an opportunity to support such ships, Kongsberg and Wilhelmsen, also of Norway, announced in April that they would form a company to develop, operate and provide logistics services for autonomous ships. The joint venture, called Massterly, became operational Aug. 1. “Currently, we are at the very beginning of this development, but we see and believe that there will be a significant market for these types of services in the near future,” Wilhelmsen says. Japan’s Rakuten Institute of Technology and Norway’s Maritime Robotics announced in March that they

will jointly study whether unmanned cargo ships could be a cheaper alternative to trucks. “The truck industry requires massive amounts of manpower and large investment into infrastructure to accommodate the trucks, including roads, tunnels, bridges and gas stations,” the announcement says. “Unmanned ships do not require the same level of infrastructure investment as trucks, and can potentially operate using current sea ports, docks and other existing maritime infrastructure.” A concept video posted online by Maritime Robotics shows an unmanned “shuttle ship,” the 72-foot-long Rakuten K22, transporting cargo containers from a floating warehouse to shore. A drone takes off from the K22 to deliver an individual package to a doorstep. “With over 70 percent of our planet covered by oceans, we envisage a future where a fully autonomous logistics chain is done mainly at sea,” the video says.

The cover story for the October issue of AUVSI's Unmanned Systems magazine.

The cover story for the October issue of AUVSI's Unmanned Systems magazine.