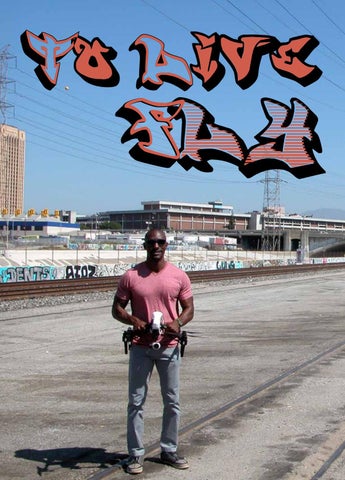 Arvel Chappell faced up to six months in jail and up to $1,000 in fines for violating a local drone law.

Last December, Arvel Chappell had no idea he was about to become very newsworthy in the field of unmanned aircraft. He was simply doing something that lots of Americans that holiday season would do: demonstrating his store-bought drone to a curious friend. Chappell, a 35 year-old filmmaker and aerospace enthusiast, stood beside the concrete basin of the Los Angeles River and piloted his DJI Inspire 1 into the sky. His friend watched in wonder as the drone, backlit by a burnt orange sunset, rose against the city’s jagged skyline. But something else was in the sky, too: a helicopter operated by the LA Police Department. Less than a quarter-mile away from Chappell’s location sits Hooper Heliport, the LAPD Support Division’s base at Piper Tech in downtown Los Angeles. As soon as Chappell saw the helicopter, he quickly landed his drone. Though there was little chance of a near-encounter — the helicopter was 300 to 400 yards away, and the LA River is draped with thick power lines a helicopter wouldn’t dare approach— Chappell didn’t want to take a chance.

Chappell had noticed a loud party in a nearby warehouse and assumed the aircraft had been sent to monitor that situation. “I get the drone taken apart in its case and put it in my car, and that’s when I notice the helicopter’s light was shining on me,” recalls Chappell. He and his friend wondered if the helicopter pilot believed they were connected to the nearby party. “Once I got in the car and left, I saw the light was following me and I thought, ‘Oh crap, this is not good.’” Chappell pulled over and promptly called the LAPD to inquire why the helicopter was following him. Before Chappell could be connected with anyone who could help him, ground units in patrol cars showed up. The officers informed him that a sergeant from the nearby LAPD heliport was rushing to the scene. Chappell recalls the sergeant arriving in a very agitated state. “He told me that LA had just passed this new law and they had to confiscate my drone. He tells me he’s going to report this to the Federal Aviation Administration and he has another officer write out a citation for a misdemeanor charge.” As an officer handed him the citation, Chappell watched numbly as the case containing his drone was loaded into a patrol car. Two months earlier, the LA City Council had unanimously passed an ordinance severely restricting the operation of drones within the city. These rules prohibited the flying of an unmanned aircraft within five miles of an airport without permission, flying it 400 feet above the ground or within 25 feet of another person, or flying beyond

its operator’s visual line of sight. Violators faced misdemeanor charges on all counts. This ordinance had been in effect for just two weeks when Chappell was charged with violating it. Despite the frosty reception from the heliport sergeant, Chappell received some warm advice from the police on the scene. “Other beat cops are telling me: Arvel, we’re sorry that this happened, just go to the judge and be the nice guy that you are and everything will be fine. What happened to you could happen to anybody. And then they started asking questions about drones because this was around Christmas time and they’re all considering buying drones for their family members and kids.” Chappell’s hope that he might escape these charges was soon dashed when LA City Attorney Mike Feuer issued a press release trumpeting the criminal charges that had been filed against him. “An air unit coming in to land allegedly had to alter its path in order to avoid the device,” Feuer claimed. “Operating a drone near trafficked airspace places pilots and the public at serious risk.” Under the ordinance, Chappell was facing up to six months in jail and a $1,000 fine. The press picked up the story and ran with it. “Once they issued the press release, that’s when the craziness started. It was in the LA Times, it was on National Public Radio, it was all over the place,” he recalls. Chappell quickly sought legal counsel from Terrence Jones of the LA-based law firm Ballard Spahr

LLP. Jones had some experience with drones, although it wasn’t exactly positive. A former federal prosecutor, Jones often took on civil division cases to recoup the cost of fighting fires caused by negligence of construction companies or developers. While monitoring one in-progress wildfire, Jones saw several firefighting aircraft forcibly grounded because a private citizen flew a drone into the area. “My first introduction to drones was sort of a negative one,” he says. But a member of the U.S. Forest Service insisted to Jones that someday UAS might replace helicopters — and save lives in the process. Although news publications such as The Hollywood Reporter claimed the LA City ordinance was in sync with rules issued by the FAA, Chappell and his lawyer quickly realized a fatal flaw behind the LA City Council’s action: it violated the wellestablished rule of federal preemption. “In the order of superiority here, federal law is the big dog and you can’t make ay type of law relating to aviation because that’s the sole purview of the FAA,” says Jones. “That has long been the law as articulated by the Supreme Court. The Court has said the FAA and the FAA only is solely responsible for creating laws related to airspace.” In response to the federal preemption motion filed on behalf of Chappell, the LA City Attorney quickly and quietly dismissed all

of the charges. But the case wasn’t over yet. The city filed a new motion charging Chappell with flying his drone in a careless or reckless manner. It was a last-ditch effort from the city to save face on a well-publicized case that had backfired, according to Chappell’s attorney. By claiming their definition of “careless or reckless” was based on the FAA’s definition, the city clearly sought to sidestep federal preemption. “We really couldn’t challenge that charge because they said, ‘The federal law will be our law,’” says Jones. So Chappell now faced a jury trial on this one remaining charge. According to Jones, he and his client were heartened when the jury selection process revealed citizens who were either well-informed or at least curious about the use of unmanned aircraft. Jones was able to convince the jury that Chappell had not operated his DJI Inspire in a careless or reckless manner. “We wanted to convey to the jury that this wasn’t some teenager or some idiot who has a toy that he’s using recklessly. This is a professional, educated person. When he’s operating this aircraft, he’s not going to do it in a way that puts other aviators in danger,” Jones said. Despite the testimony of several LAPD helicopter pilots, the facts of the case were clear. “The helicopter never got closer than 300 yards from the drone,” says Jones. “That’s three football fields away. The pilots were hard pressed to try to convince the jury they feared for their lives from something that was three football fields away.” “The litmus test for recklessness is about safety,” Chappell points out. “Could this have caused harm to

people or property? It didn’t have to cause any harm, but could it have potentially caused any harm?” The jury concluded the prosecution’s charges had failed this litmus test. Chappell was found not guilty of the charge, and his confiscated drone was returned to him. The LA City Attorney’s office could not be reached for comment. Ironically, on the day the jury reached its verdict, the FAA issued its Small Unmanned Aircraft Regulations (Part 107) providing its final rules for the commercial use of drones. The experience and resulting media exposure left the filmmaker a bit shaken but also firm in his resolve as a proponent for UAV technology. “I feel that there’s a lot of common ground between what the LAPD wants, what the city wants, and what reasonable people in the community want. I even sent the LAPD a proposal which is basically a community policing program for drones. It’s about being more proactive. Instead of passing a law that criminalizes everything under the sun, why don’t you get out there and educate the public by participating with them?” Chappell estimates that the city spent millions of dollars prosecuting his case. “From all the hearings we had, the trial, the time off work — they had at least eight police helicopter pilots testify — I just feel like if that kind of resource was spent on creating a website and having a community event with drones and helicopter pilots, that could be used to get kids interested in aviation. It could be used for a whole multitude of other pro-active positive things.” Chappell’s proactive stance offers a path forward for cities and munici-

palities who will see more and more UAVs in their skies. According to the Consumer Technology Assocation, sales of drones in the U.S. will top 2.3 million in 2016, a 149 percent increase over last year’s total. Among the many film projects Chappell has in the works, the one closest to his heart is about a young man who sees aviation as a way out of the dire circumstances of his childhood. “I wanted it to be a coming of age film about aviation and social mobility. It’s about stuff I saw growing up in Compton and seeing how different people handle the pressures of the city and how they decide to vent out or get through it. The protagonist wants to fly and has a criminal court case that prevents him from flying.” Chappell shakes his head and laughs, adding, “Yes, the screenplay was written prior to all of this happening.”  Editor’s Note: AUVSI takes no legal stand on the charges leveled against Arvel Chappell and does not condone flying anywhere near manned aircraft, especially helicopters. This story was printed because it highlights a range of issues that will likely play out in other courts, including where people can fly drones and the issue of federal preemption of state and local law. To make sure you’re not flying in a contentious area, consult Know Before You Fly, (www.KnowBeforeYouFly.org) which includes AirMap’s real-time graphic map of legal and illegal flying locations.

A story about a drone-related lawsuit in Los Angeles, which highlights some of the legal issues still swirling around this hot commercial to...

A story about a drone-related lawsuit in Los Angeles, which highlights some of the legal issues still swirling around this hot commercial to...