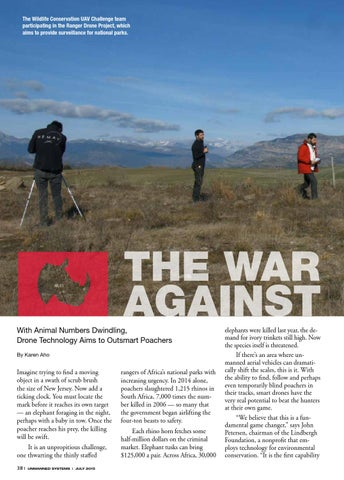 The Wildlife Conservation UAV Challenge team participating in the Ranger Drone Project, which aims to provide surveillance for national parks.

Imagine trying to find a moving object in a swath of scrub brush the size of New Jersey. Now add a ticking clock. You must locate the mark before it reaches its own target — an elephant foraging in the night, perhaps with a baby in tow. Once the poacher reaches his prey, the killing will be swift. It is an unpropitious challenge, one thwarting the thinly staffed 38 |

rangers of Africa’s national parks with increasing urgency. In 2014 alone, poachers slaughtered 1,215 rhinos in South Africa, 7,000 times the number killed in 2006 — so many that the government began airlifting the four-ton beasts to safety. Each rhino horn fetches some half-million dollars on the criminal market. Elephant tusks can bring $125,000 a pair. Across Africa, 30,000

elephants were killed last year, the demand for ivory trinkets still high. Now the species itself is threatened. If there’s an area where unmanned aerial vehicles can dramatically shift the scales, this is it. With the ability to find, follow and perhaps even temporarily blind poachers in their tracks, smart drones have the very real potential to beat the hunters at their own game. “We believe that this is a fundamental game changer,” says John Petersen, chairman of the Lindbergh Foundation, a nonprofit that employs technology for environmental conservation. “It is the first capability

Wildlife that we know of that can claim that its utilization actually stops poaching where it is implemented. “ The Lindbergh Foundation is behind Air Shepherd, an innovative program that’s teaming drones with computer analytics to intercept poachers in Africa. The computer calculates where poachers are likely to strike next. UAS track the target to guide the rangers the final steps in. Neither computer nor plane could get the job done on its own. Prof. Thomas Snitch, of the University of Maryland’s Institute for Advanced Computer Studies, first devised the software to calculate the

most likely sites of improvised explosive devises in Iraq and Afghanistan. If the past is the best predictor of the future, then a computer should be able to learn the enemy’s next move as long as it’s fed enough data. It’s a lot of data, and in the African bush it includes not just maps, dates and environmental conditions, but lunar cycles, animal tracking devices and hunters’ patterns. Each time the poachers alter their routine in an attempt to evade capture, the computer adjusts its math. “Based on our models, we know with near 90 percent certainty where rhinos are likely to be on a particular

night between 6:30 and 8:00, prime time for killings,” Snitch writes in The Conversation magazine. “At the same time, by mathematically recreating the environment when previous poachings have occurred, we have a very good idea of when and where poachers are likely to strike.” “We don’t have to find poachers. We just need to know where the rhinos are likely to be,” he adds. The rangers are put into place, and drones set aloft, where they can spot poachers within two kilometers of a rhino. Watching the video feed and location data, the scientists can “move our rangers as if they were JULY 2015 | UNMANNED SYSTEMS

The Lindbergh Foundation’s collection of drones it uses for antipoaching missions.

chess pieces,” Snitch writes. In 350-plus missions, Air Shepherd reports that no rhinos have been killed under the drones’ watch. Dozens of poachers have been arrested. “In every area where we have put our solutions package to work and the UAVs are flying, poaching stops within five to seven days. Period — it stops,” Snitch writes. Next up for Air Shepherd is raising money for more UAS and securing governments’ permission to fly in countries throughout Africa. Otherwise poachers simply pick up and move to unpatrolled regions. uuu

“I look at drones as the game changer,” says Princess Aliyah Pandolfi, director of the Wildlife Conservation UAV Challenge, which is planning to schedule drone “games” to test finalists’ UAS in Africa later this year. Among the projects is putting nonlethal weapons on the backs of UAS capable of temporarily disabling poachers, giving rangers the needed time to reach the area by land. “You can flash a pretty powerful light to have them paralyzed for a bit of time. Most of the poaching occurs at nighttime,” says Pandolfi. There’s also “a high-frequency sound that could deter them from moving around.” “We don’t want to give out all of the different nonlethal weapons we’d be using, because poachers are watching the news too,” she says. “One thing I do want them to know is, we’ll find you.”

The challenge is fine-tuning technology to sync data from cameras and background information to both identify the exact objects below — a group of poachers and not rangers, for example — and then decide whether to follow and contact rangers. “We didn’t want to get involved in drones that would only provide a live-stream video. We’re interested in fully [economical] missions,” Pandolfi says. “We want a brain with the eye in the sky.” The aircraft itself needs to be durable yet light, able to withstand wind and fluctuating temperatures yet easily backpacked into remote areas. The Wildlife Conservation UAV Challenge is testing a modular UAS printed via 3-D technology. It has a 12-foot wingspan and can carry 30 pounds, yet the craft itself is lightweight and can be carried in sections to the launch site.

“In the ideal world, you would want to have sensors embedded throughout the park, but the cost gets out of control,” Pandolfi says. “If you have a drone that can provide that broad area of coverage, it could be very, very efficient.” Serge Wich, cofounder of ConservationDrones.org, gets emails from biologists and conservationists around the world interested in using UAS to enhance their capabilities. Already, drones have been at work monitoring the reefs off Belize for illegal fishing, counting penguins in Antarctica, hovering above birds nests everywhere, monitoring the habitats of caribou in Greenland and orangutans

in Indonesia, checking for sick whales off the coast of British Columbia, and more — all the kinds of things currently done at great expense and often at great risk. “With a lot of the current ways we do that it’s very expensive,” says Wich, who teaches in the School of Natural Sciences at Liverpool John Moores University in the U.K., adding that the only alternative is often to put people up in planes for long hours. Despite the financial savings UAS offer, their cost is still too high for many areas that need conservation help

most. ConservationDrones.org, the Wildlife Conservation UAV Challenge and others are not only trying to bring down costs, but they are trying to share as much information as possible, a kind of open-source technology for the skies. “I think the potential impact is probably beyond what I can imagine. It’s huge,” says Wich. “Because this technology is rapidly becoming so user friendly and lower in cost, I predict in the future it will be part of a standard field kit of any field biologist. It will be like carrying binoculars.”  JULY 2015 | UNMANNED SYSTEMS

You are invited to help shape the next era of aviation with other stakeholders from industry, government, and academia. Together, we will collaborate and discuss technology, privacy, safety and security aspects of a low-altitude UAS trafﬁc management system.

A New Era of Aviation

Register to attend, exhibit, or demonstrate your technology at www.svc-auvsi.org