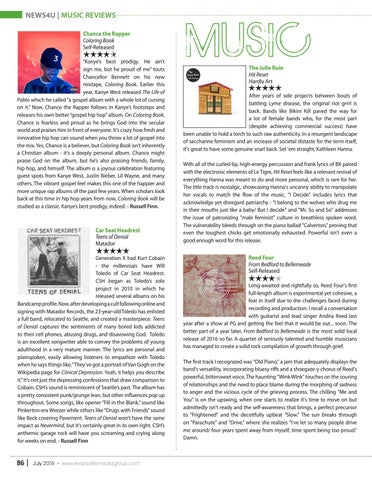 NEWS4U | MUSIC REVIEWS Chance the Rapper Coloring Book Self-Released “Kanye’s best prodigy. He ain’t sign me, but he proud of me” touts Chancellor Bennett on his new mixtape, Coloring Book. Earlier this year, Kanye West released The Life of Pablo which he called “a gospel album with a whole lot of cursing on it.” Now, Chance the Rapper follows in Kanye’s footsteps and releases his own better “gospel hip hop” album. On Coloring Book, Chance is fearless and proud as he brings God into the secular world and praises him in front of everyone. It’s crazy how fresh and innovative hip hop can sound when you throw a lot of gospel into the mix. Yes, Chance is a believer, but Coloring Book isn’t inherently a Christian album - it’s a deeply personal album. Chance might praise God on the album, but he’s also praising friends, family, hip hop, and himself. The album is a joyous celebration featuring guest spots from Kanye West, Justin Bieber, Lil Wayne, and many others. The vibrant gospel feel makes this one of the happier and more unique rap albums of the past few years. When scholars look back at this time in hip hop years from now, Coloring Book will be studied as a classic. Kanye’s best prodigy, indeed. - Russell Finn.

Car Seat Headrest Teens of Denial Matador Generation X had Kurt Cobain - the millennials have Will Toledo of Car Seat Headrest. CSH began as Toledo’s solo project in 2010 in which he released several albums on his Bandcamp profile. Now, after developing a cult following online and signing with Matador Records, the 23-year-old Toledo has enlisted a full band, relocated to Seattle, and created a masterpiece. Teens of Denial captures the sentiments of many bored kids addicted to their cell phones, abusing drugs, and disavowing God. Toledo is an excellent songwriter able to convey the problems of young adulthood in a very mature manner. The lyrics are personal and plainspoken, easily allowing listeners to empathize with Toledo when he says things like, “They’ve got a portrait of Van Gogh on the Wikipedia page for Clinical Depression. Yeah, it helps you describe it.” It’s not just the depressing confessions that draw comparison to Cobain, CSH’s sound is reminiscent of Seattle’s past. The album has a pretty consistent punk/grunge lean, but other influences pop up throughout. Some songs, like opener “Fill in the Blank,” sound like Pinkerton-era Weezer while others like “Drugs with Friends” sound like Beck covering Pavement. Teens of Denial won’t have the same impact as Nevermind, but it’s certainly great in its own right. CSH’s anthemic garage rock will have you screaming and crying along for weeks on end. - Russell Finn

After years of side projects between bouts of battling Lyme disease, the original riot grrrl is back. Bands like Bikini Kill paved the way for a lot of female bands who, for the most part (despite achieving commercial success) have been unable to hold a torch to such raw authenticity. In a resurgent landscape of saccharine feminism and an increase of societal distaste for the term itself, it's great to have some genuine snarl back. Set 'em straight, Kathleen Hanna. With all of the curled-lip, high-energy percussion and frank lyrics of BK paired with the electronic elements of Le Tigre, Hit Reset feels like a relevant revival of everything Hanna was meant to do and more personal, which is rare for her. The title track is nostalgic, showcasing Hanna's uncanny ability to manipulate her vocals to match the flow of the music. "I Decide" includes lyrics that acknowledge yet disregard patriarchy - "I belong to the wolves who drug me in their mouths just like a baby/ But I decide" and "Mr. So and So" addresses the issue of patronizing "male feminist" culture in breathless spoken word. The vulnerability bleeds through on the piano ballad "Calverton," proving that even the toughest chicks get emotionally exhausted. Powerful isn't even a good enough word for this release.

Reed Four From Bedford to Bellemeade Self-Released Long-awaited and rightfully so, Reed Four's first full-length album is experimental yet cohesive, a feat in itself due to the challenges faced during recording and production. I recall a conversation with guitarist and lead singer Andria Reed last year after a show at PG and getting the feel that it would be out... soon. The better part of a year later, From Bedford to Bellemeade is the most solid local release of 2016 so far. A quartet of seriously talented and humble musicians has managed to create a solid rock compilation of growth through grief. The first track I recognized was "Old Piano," a jam that adequately displays the band's versatility, incorporating bluesy riffs and a shoegaze-y chorus of Reed's powerful, bittersweet voice. The haunting "Wink WInk" touches on the souring of relationships and the need to place blame during the morphing of sadness to anger and the vicious cycle of the grieving process. The chilling "Me and You" is on the upswing, when one starts to realize it's time to move on but admittedly isn't ready and the self-awareness that brings, a perfect precursor to "Frightened" and the deceitfully upbeat "Slow." The sun breaks through on "Parachute" and "Drive," where she realizes "I've let so many people drive me around/ four years spent away from myself, time spent being too proud." Damn. 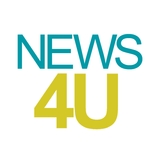