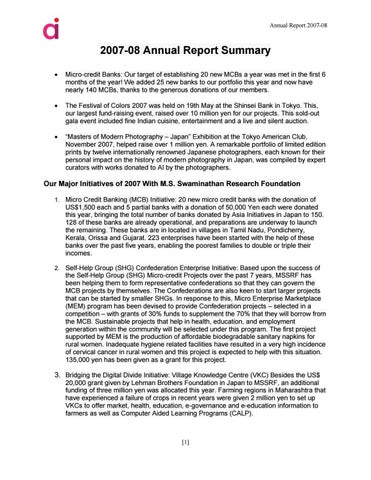 Micro-credit Banks: Our target of establishing 20 new MCBs a year was met in the first 6 months of the year! We added 25 new banks to our portfolio this year and now have nearly 140 MCBs, thanks to the generous donations of our members.

The Festival of Colors 2007 was held on 19th May at the Shinsei Bank in Tokyo. This, our largest fund-raising event, raised over 10 million yen for our projects. This sold-out gala event included fine Indian cuisine, entertainment and a live and silent auction.

“Masters of Modern Photography – Japan” Exhibition at the Tokyo American Club, November 2007, helped raise over 1 million yen. A remarkable portfolio of limited edition prints by twelve internationally renowned Japanese photographers, each known for their personal impact on the history of modern photography in Japan, was compiled by expert curators with works donated to AI by the photographers.

US$1,500 each and 5 partial banks with a donation of 50,000 Yen each were donated this year, bringing the total number of banks donated by Asia Initiatives in Japan to 150. 128 of these banks are already operational, and preparations are underway to launch the remaining. These banks are in located in villages in Tamil Nadu, Pondicherry, Kerala, Orissa and Gujarat. 223 enterprises have been started with the help of these banks over the past five years, enabling the poorest families to double or triple their incomes. 2. Self-Help Group (SHG) Confederation Enterprise Initiative: Based upon the success of

the Self-Help Group (SHG) Micro-credit Projects over the past 7 years, MSSRF has been helping them to form representative confederations so that they can govern the MCB projects by themselves. The Confederations are also keen to start larger projects that can be started by smaller SHGs. In response to this, Micro Enterprise Marketplace (MEM) program has been devised to provide Confederation projects – selected in a competition – with grants of 30% funds to supplement the 70% that they will borrow from the MCB. Sustainable projects that help in health, education, and employment generation within the community will be selected under this program. The first project supported by MEM is the production of affordable biodegradable sanitary napkins for rural women. Inadequate hygiene related facilities have resulted in a very high incidence of cervical cancer in rural women and this project is expected to help with this situation. 135,000 yen has been given as a grant for this project.

3. Bridging the Digital Divide Initiative: Village Knowledge Centre (VKC) Besides the US$ 20,000 grant given by Lehman Brothers Foundation in Japan to MSSRF, an additional funding of three million yen was allocated this year. Farming regions in Maharashtra that have experienced a failure of crops in recent years were given 2 million yen to set up VKCs to offer market, health, education, e-governance and e-education information to farmers as well as Computer Aided Learning Programs (CALP). 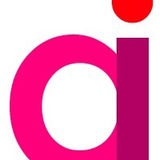