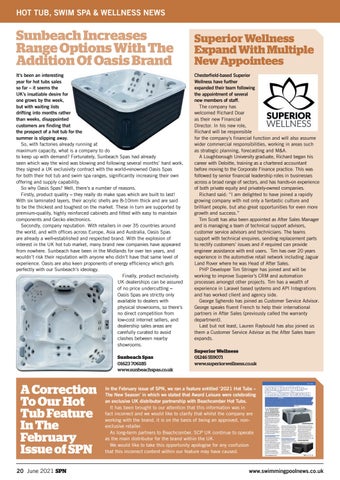 Sunbeach Increases Range Options With The Addition Of Oasis Brand It’s been an interesting year for hot tubs sales so far – it seems the UK’s insatiable desire for one grows by the week, but with waiting lists drifting into months rather than weeks, disappointed customers are finding that the prospect of a hot tub for the summer is slipping away. So, with factories already running at maximum capacity, what is a company to do to keep up with demand? Fortunately, Sunbeach Spas had already seen which way the wind was blowing and following several months’ hard work, they signed a UK exclusivity contract with the world-renowned Oasis Spas for both their hot tub and swim spa ranges, significantly increasing their own offering and supply capability. So why Oasis Spas? Well, there’s a number of reasons. Firstly, product quality – they really do make spas which are built to last! With six laminated layers, their acrylic shells are 8-10mm thick and are said to be the thickest and toughest on the market. These in turn are supported by premium-quality, highly reinforced cabinets and fitted with easy to maintain components and Gecko electronics. Secondly, company reputation. With retailers in over 35 countries around the world, and with offices across Europe, Asia and Australia, Oasis Spas are already a well-established and respected brand. With the explosion of interest in the UK hot tub market, many brand new companies have appeared from nowhere. Sunbeach have been in the Midlands for over ten years, and wouldn’t risk their reputation with anyone who didn’t have that same level of experience. Oasis are also keen proponents of energy efficiency which gels perfectly with our Sunbeach’s ideology. Finally, product exclusivity. UK dealerships can be assured of no price undercutting – Oasis Spas are strictly only available to dealers with physical showrooms, so there’s no direct competition from low-cost internet sellers, and dealership sales areas are carefully curated to avoid clashes between nearby showrooms. Sunbeach Spas 01623 706185 www.sunbeachspas.co.uk

Superior Wellness Expand With Multiple New Appointees Chesterfield-based Superior Wellness have further expanded their team following the appointment of several new members of staff. The company has welcomed Richard Doar as their new Financial Director. In his new role, Richard will be responsible for the company’s financial function and will also assume wider commercial responsibilities, working in areas such as strategic planning, forecasting and M&A. A Loughborough University graduate, Richard began his career with Deloitte, training as a chartered accountant before moving to the Corporate Finance practice. This was followed by senior financial leadership roles in businesses across a broad range of sectors, and has hands-on experience of both private equity and privately-owned companies. Richard said: “I am delighted to have joined a rapidly growing company with not only a fantastic culture and brilliant people, but also great opportunities for even more growth and success.” Tim Scott has also been appointed as After Sales Manager and is managing a team of technical support advisors, customer service advisors and technicians. The teams support with technical enquires, sending replacement parts to rectify customers’ issues and if required can provide engineer assistance with end users. Tim has over 20 years experience in the automotive retail network including Jaguar Land Rover where he was Head of After Sales. PHP Developer Tim Stringer has joined and will be working to improve Superior’s CRM and automation processes amongst other projects. Tim has a wealth of experience in Laravel based systems and API Integrations and has worked client and agency side. George Sghendo has joined as Customer Service Advisor. George speaks fluent French to help their international partners in After Sales (previously called the warranty department). Last but not least, Lauren Raybould has also joined us them a Customer Service Advisor as the After Sales team expands. Superior Wellness 01246 559071 www.superiorwellness.co.uk

In the February issue of SPN, we ran a feature entitled ‘2021 Hot Tubs – The New Season’ in which we stated that Award Leisure were celebrating an exclusive UK distributor partnership with Beachcomber Hot Tubs. It has been brought to our attention that this information was in fact incorrect and we would like to clarify that whilst the company are working with the brand, it is on the basis of being an approved, nonexclusive retailer. As long-term partners to Beachcomber, SCP UK continue to operate as the main distributor for the brand within the UK. We would like to take this opportunity apologise for any confusion that this incorrect content within our feature may have caused.