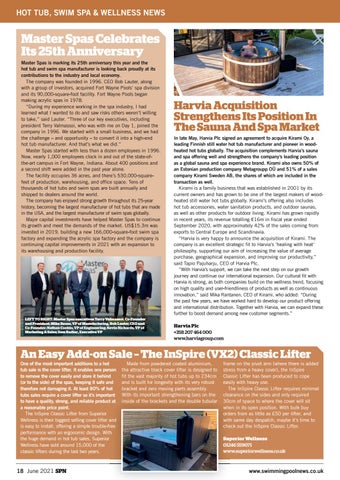 Master Spas Celebrates Its 25th Anniversary Master Spas is marking its 25th anniversary this year and the hot tub and swim spa manufacturer is looking back proudly at its contributions to the industry and local economy. The company was founded in 1996. CEO Bob Lauter, along with a group of investors, acquired Fort Wayne Pools’ spa division and its 90,000-square-foot facility. Fort Wayne Pools began making acrylic spas in 1978. “During my experience working in the spa industry, I had learned what I wanted to do and saw risks others weren’t willing to take,” said Lauter. “Three of our key executives, including president Terry Valmassoi, who was with me on Day 1, joined the company in 1996. We started with a small business, and we had the challenge – and opportunity – to convert it into a high-end hot tub manufacturer. And that’s what we did.” Master Spas started with less than a dozen employees in 1996. Now, nearly 1,000 employees clock in and out of the state-ofthe-art campus in Fort Wayne, Indiana. About 400 positions and a second shift were added in the past year alone. The facility occupies 36 acres, and there’s 530,000-squarefeet of production, warehousing, and office space. Tens of thousands of hot tubs and swim spas are built annually and shipped to dealers around the world. The company has enjoyed strong growth throughout its 25-year history, becoming the largest manufacturer of hot tubs that are made in the USA, and the largest manufacturer of swim spas globally. Major capital investments have helped Master Spas to continue its growth and meet the demands of the market. US$15.3m was invested in 2019, building a new 166,000-square-foot swim spa factory and expanding the acrylic spa factory and the company is continuing capital improvements in 2021 with an expansion to its warehousing and production facility.

Harvia Acquisition Strengthens Its Position In The Sauna And Spa Market In late May, Harvia Plc signed an agreement to acquire Kirami Oy, a leading Finnish still water hot tub manufacturer and pioneer in woodheated hot tubs globally. The acquisition complements Harvia’s sauna and spa offering well and strengthens the company’s leading position as a global sauna and spa experience brand. Kirami also owns 50% of an Estonian production company Metagroupp OÜ and 51% of a sales company Kirami Sweden AB, the shares of which are included in the transaction as well. Kirami is a family business that was established in 2001 by its current owners and has grown to be one of the largest makers of woodheated still water hot tubs globally. Kirami’s offering also includes hot tub accessories, water sanitation products, and outdoor saunas, as well as other products for outdoor living. Kirami has grown rapidly in recent years, its revenue totalling €16m in fiscal year ended September 2020, with approximately 42% of the sales coming from exports to Central Europe and Scandinavia. “Harvia is very happy to announce the acquisition of Kirami. The company is an excellent strategic fit to Harvia’s ‘healing with heat’ philosophy, supporting our aim of increasing the value of average purchase, geographical expansion, and improving our productivity,” said Tapio Pajuharju, CEO of Harvia Plc. “With Harvia’s support, we can take the next step on our growth journey and continue our international expansion. Our cultural fit with Harvia is strong, as both companies build on the wellness trend, focusing on high quality and user-friendliness of products as well as continuous innovation,” said Mika Rantanen, CEO of Kirami, who added: “During the past few years, we have worked hard to develop our product offering and international distribution. Together with Harvia, we can expand these further to boost demand among new customer segments.” Harvia Plc +358 207 464 000 www.harviagroup.com

One of the most important additions to a hot tub sale is the cover lifter. It enables one person to remove the cover easily and store it behind (or to the side) of the spas, keeping it safe and therefore not damaging it. At least 80% of hot tubs sales require a cover lifter so it’s important to have a quality, strong, and reliable product at a reasonable price point. The InSpire Classic Lifter from Superior Wellness is their biggest selling cover lifter and is easy to install, offering a simple trouble-free performance with an ergonomic design. With the huge demand in hot tub sales, Superior Wellness have sold around 15,000 of the classic lifters during the last two years.

Made from powdered coated aluminium, the attractive black cover lifter is designed to fit the vast majority of hot tubs up to 234cm and is built for longevity with its very robust bracket and zero moving parts assembly. With its important strengthening bars on the inside of the brackets and the double tubular