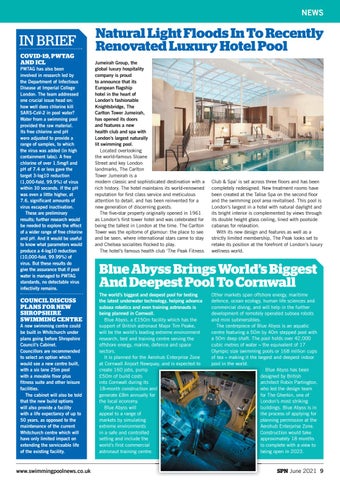 IN BRIEF COVID-19, PWTAG AND ICL PWTAG has also been involved in research led by the Department of Infectious Disease at Imperial College London. The team addressed one crucial issue head on: how well does chlorine kill SARS-CoV-2 in pool water? Water from a swimming pool provided the raw material. Its free chlorine and pH were adjusted to provide a range of samples, to which the virus was added (in high containment labs). A free chlorine of over 1.5mg/l and pH of 7.4 or less gave the target 3-log10 reduction (1,000-fold, 99.9%) of virus within 30 seconds. If the pH was even a little higher, at 7.6, significant amounts of virus escaped inactivation. These are preliminary results; further research would be needed to explore the effect of a wider range of free chlorine and pH. And it would be useful to know what parameters would produce a 4-log10 reduction (10,000-fold, 99.99%) of virus. But these results do give the assurance that if pool water is managed to PWTAG standards, no detectable virus infectivity remains.

COUNCIL DISCUSS PLANS FOR NEW SHROPSHIRE SWIMMING CENTRE A new swimming centre could be built in Whitchurch under plans going before Shropshire Council’s Cabinet. Councillors are recommended to select an option which would see a new centre built, with a six lane 25m pool with a movable floor plus fitness suite and other leisure facilities. The cabinet will also be told that the new build options will also provide a facility with a life expectancy of up to 50 years, as opposed to the maintenance of the current Whitchurch centre which will have only limited impact on extending the serviceable life of the existing facility.

Natural Light Floods In To Recently Renovated Luxury Hotel Pool Jumeirah Group, the global luxury hospitality company is proud to announce that its European flagship hotel in the heart of London’s fashionable Knightsbridge, The Carlton Tower Jumeirah, has opened its doors and features a new health club and spa with London’s largest naturally lit swimming pool. Located overlooking the world-famous Sloane Street and key London landmarks, The Carlton Tower Jumeirah is a modern classic and sophisticated destination with a rich history. The hotel maintains its world-renowned reputation for first class service and meticulous attention to detail, and has been reinvented for a new generation of discerning guests. The five-star property originally opened in 1961 as London’s first tower hotel and was celebrated for being the tallest in London at the time. The Carlton Tower was the epitome of glamour: the place to see and be seen, where international stars came to stay and Chelsea socialites flocked to play. The hotel’s famous health club ‘The Peak Fitness

Club & Spa’ is set across three floors and has been completely redesigned. New treatment rooms have been created at the Talise Spa on the second floor and the swimming pool area revitalised. This pool is London’s largest in a hotel with natural daylight and its bright interior is complemented by views through its double height glass ceiling, lined with poolside cabanas for relaxation. With its new design and features as well as a strictly limited membership, The Peak looks set to retake its position at the forefront of London’s luxury wellness world.

Blue Abyss Brings World’s Biggest And Deepest Pool To Cornwall The world’s biggest and deepest pool for testing the latest underwater technology, helping advance subsea robotics and even training astronauts is being planned in Cornwall. Blue Abyss, a £150m facility which has the support of British astronaut Major Tim Peake, will be the world’s leading extreme environment research, test and training centre serving the offshore energy, marine, defence and space sectors. It is planned for the Aerohub Enterprise Zone at Cornwall Airport Newquay, and is expected to create 160 jobs, pump £50m of build costs into Cornwall during its 18-month construction and generate £8m annually for the local economy. Blue Abyss will appeal to a range of markets by simulating extreme environments in a safe and controlled setting and include the world’s first commercial astronaut training centre.

Other markets span offshore energy, maritime defence, ocean ecology, human life sciences and commercial diving, and will help in the further development of remotely operated subsea robots and mini submersibles. The centrepiece of Blue Abyss is an aquatic centre featuring a 50m by 40m stepped pool with a 50m deep shaft. The pool holds over 42,000 cubic metres of water – the equivalent of 17 Olympic size swimming pools or 168 million cups of tea – making it the largest and deepest indoor pool in the world. Blue Abyss has been designed by British architect Robin Partington, who led the design team for The Gherkin, one of London’s most striking buildings. Blue Abyss is in the process of applying for planning permission at the Aerohub Enterprise Zone. Construction would take approximately 18 months to complete with a view to being open in 2023.