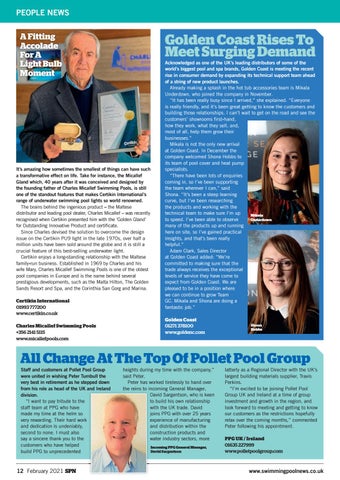 A Fitting Accolade For A Light Bulb Moment

It’s amazing how sometimes the smallest of things can have such a transformative effect on life. Take for instance, the Micallef Gland which, 40 years after it was conceived and designed by the founding father of Charles Micallef Swimming Pools, is still one of the standout features that makes Certikin International’s range of underwater swimming pool lights so world renowned. The brains behind the ingenious product – the Maltese distributor and leading pool dealer, Charles Micallef – was recently recognised when Certikin presented him with the ‘Golden Gland’ for Outstanding Innovative Product and certificate. Since Charles devised the solution to overcome the design issue on the Certikin PU9 light in the late 1970s, over half a million units have been sold around the globe and it is still a crucial feature of this best-selling underwater light. Certikin enjoys a long-standing relationship with the Maltese family-run business. Established in 1969 by Charles and his wife Mary, Charles Micallef Swimming Pools is one of the oldest pool companies in Europe and is the name behind several prestigious developments, such as the Malta Hilton, The Golden Sands Resort and Spa, and the Corinthia San Gorg and Marina. Certikin International 01993 777200 www.certikin.co.uk Charles Micallef Swimming Pools +356 2141 5115 www.micallefpools.com

Acknowledged as one of the UK’s leading distributors of some of the world’s biggest pool and spa brands, Golden Coast is meeting the recent rise in consumer demand by expanding its technical support team ahead of a string of new product launches. Already making a splash in the hot tub accessories team is Mikala Underdown, who joined the company in November. “It has been really busy since I arrived,” she explained. “Everyone is really friendly, and it’s been great getting to know the customers and building those relationships. I can’t wait to get on the road and see the customers’ showrooms first-hand, how they work, what they sell, and, most of all, help them grow their businesses.” Mikala is not the only new arrival at Golden Coast. In December the company welcomed Shona Hobbs to its team of pool cover and heat pump specialists. “There have been lots of enquiries coming in, so I’ve been supporting the team wherever I can,” said Shona. “It’s been a steep learning curve, but I’ve been researching the products and working with the technical team to make sure I’m up Mikala Underdown to speed. I’ve been able to observe many of the products up and running here on site, so I’ve gained practical insights, and that’s been really helpful.” Adam Clark, Sales Director at Golden Coast added: “We’re committed to making sure that the trade always receives the exceptional levels of service they have come to expect from Golden Coast. We are pleased to be in a position where we can continue to grow Team GC. Mikala and Shona are doing a fantastic job.” Golden Coast 01271 378100 www.goldenc.com

All Change At The Top Of Pollet Pool Group Staff and customers at Pollet Pool Group were united in wishing Peter Turnbull the very best in retirement as he stepped down from his role as head of the UK and Ireland division. “I want to pay tribute to the staff team at PPG who have made my time at the helm so very rewarding. Their hard work and dedication is undeniably, second to none. I must also say a sincere thank you to the customers who have helped build PPG to unprecedented

heights during my time with the company,” said Peter. Peter has worked tirelessly to hand over the reins to incoming General Manager, David Sargentson, who is keen to build his own relationship with the UK trade. David joins PPG with over 25 years experience of manufacturing and distribution within the construction products and water industry sectors, more Incoming PPG General Manager, David Sargentson

latterly as a Regional Director with the UK’s largest building materials supplier, Travis Perkins. “I’m excited to be joining Pollet Pool Group UK and Ireland at a time of group investment and growth in the region, and look forward to meeting and getting to know our customers as the restrictions hopefully relax over the coming months,” commented Peter following his appointment. PPG UK / Ireland 01635 227999 www.polletpoolgroup.com