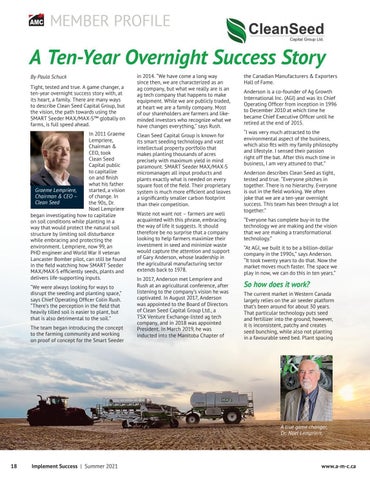 A Ten-Year Overnight Success Story By Paula Schuck Tight, tested and true. A game changer, a ten-year overnight success story with, at its heart, a family. There are many ways to describe Clean Seed Capital Group, but the vision, the path towards using the SMART Seeder MAX/MAX-S™ globally on farms, is full speed ahead. In 2011 Graeme Lempriere, Chairman &amp; CEO, took Clean Seed Capital public to capitalize on and finish what his father Graeme Lempriere, started, a vision Chairman &amp; CEO – of change. In Clean Seed the 90s, Dr. Noel Lempriere began investigating how to capitalize on soil conditions while planting in a way that would protect the natural soil structure by limiting soil disturbance while embracing and protecting the environment. Lempriere, now 99, an PHD engineer and World War II veteran Lancaster Bomber pilot, can still be found in the field watching how SMART Seeder MAX/MAX-S efficiently seeds, plants and delivers life-supporting inputs. “We were always looking for ways to disrupt the seeding and planting space,” says Chief Operating Officer Colin Rush. “There’s the perception in the field that heavily tilled soil is easier to plant, but that is also detrimental to the soil.” The team began introducing the concept to the farming community and working on proof of concept for the Smart Seeder

in 2014. “We have come a long way since then, we are characterized as an ag company, but what we really are is an ag tech company that happens to make equipment. While we are publicly traded, at heart we are a family company. Most of our shareholders are farmers and likeminded investors who recognize what we have changes everything,” says Rush. Clean Seed Capital Group is known for its smart seeding technology and vast intellectual property portfolio that makes planting thousands of acres precisely with maximum yield in mind paramount. SMART Seeder MAX/MAX-S micromanages all input products and plants exactly what is needed on every square foot of the field. Their proprietary system is much more efficient and leaves a significantly smaller carbon footprint than their competition. Waste not want not – farmers are well acquainted with this phrase, embracing the way of life it suggests. It should therefore be no surprise that a company looking to help farmers maximize their investment in seed and minimize waste would capture the attention and support of Gary Anderson, whose leadership in the agricultural manufacturing sector extends back to 1978. In 2017, Anderson met Lempriere and Rush at an agricultural conference, after listening to the company’s vision he was captivated. In August 2017, Anderson was appointed to the Board of Directors of Clean Seed Capital Group Ltd., a TSX Venture Exchange-listed ag tech company, and in 2018 was appointed President. In March 2019, he was inducted into the Manitoba Chapter of

the Canadian Manufacturers &amp; Exporters Hall of Fame. Anderson is a co-founder of Ag Growth International Inc. (AGI) and was its Chief Operating Officer from inception in 1996 to December 2010 at which time he became Chief Executive Officer until he retired at the end of 2015. “I was very much attracted to the environmental aspect of the business, which also fits with my family philosophy and lifestyle. I sensed their passion right off the bat. After this much time in business, I am very attuned to that.” Anderson describes Clean Seed as tight, tested and true. “Everyone pitches in together. There is no hierarchy. Everyone is out in the field working. We often joke that we are a ten-year overnight success. This team has been through a lot together.” “Everyone has complete buy-in to the technology we are making and the vision that we are making a transformational technology.” “At AGI, we built it to be a billion-dollar company in the 1990s,” says Anderson. “It took twenty years to do that. Now the market moves much faster. The space we play in now, we can do this in ten years.”

So how does it work? The current market in Western Canada largely relies on the air seeder platform that’s been around for about 30 years. That particular technology puts seed and fertilizer into the ground; however, it is inconsistent, patchy and creates seed bunching, while also not planting in a favourable seed bed. Plant spacing 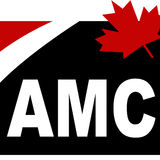 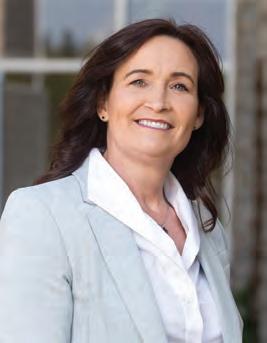 A World First for Potato Farming