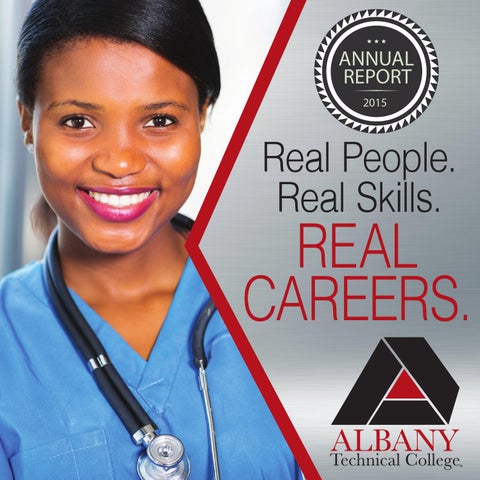 2015: A Banner Year Indeed for Albany Technical College Dear ATC Supporter: Albany Technical College truly had a banner year for 2015. Not only did we cut the ribbon on our Courtroom Classroom Lab and a Newly Energized Radiologic Technology Lab, but Southwest Georgia also gained a College and Career Academy. Our region has been working tirelessly to launch a College and Career Academy for several years and now those efforts have finally paid off. We are grateful for the opportunities that we will now be able to afford high school students in Dougherty and our surrounding counties. We also graduated the first class in our Associate of Science of Nursing program this year. This first class turned out to be an amazing group with every student passing their board exams at high rates and some being employed before even graduating. In addition, we graduated four high school students in Engineering Technology. Those four students have all moved on to universities to complete bachelorâ&#x20AC;&#x2122;s degrees through the many articulation agreements you will read about in our annual report. As always, thank you for the support you gave us in 2015. With your help, we continue to make careers and stories of success possible for the many Southwest Georgians we serve.

Albany Tech Paramedic Technology 2014 Class Graduates Soared with 100 Percent Pass Rate on National Registry Certification Exam With grades in for the fall semester that ended in December 2014 at Albany Technical College, Paramedic Technology students soared with all 15 students who graduated scoring 100 percent the first time on their National Registry Certification Exam. Among the 100 percent pass rate, this group of Paramedic Technology students also holds other impressive accomplishments. The 2014 class had zero attrition, which means the class began with 15 students and finished with 15. Of the 15 students, 14 are working in the Emergency Management Services field and one is about to begin medical school. Paramedic students are typically employed in a full-time EMS job when they come into the program at Albany Tech.

have not been used since the C. B. King U. S. Federal Courthouse was completed and occupied June 2002 started being utilized daily for instruction of Law Enforcement Technology students at Albany Technical College.

The 2015 Georgia Occupational Award of Leadership (GOAL) winner for Albany Technical College was Jerri Jarrell, Medical Assisting associate degree student. Jarrell’s career plans were to continue to build on her skills as a Medical Assistant in the healthcare industry. She was nominated to participate in the GOAL program by her instructor, Cathy Garmon, who is also the chairperson of the Medical Assisting program at Albany Tech. Jarrell graduated from Albany Tech in December 2015 and is employed by Phoebe Orthopedic Specialist Group in Albany.

Albany Technical College and Albany State University held an articulation agreement signing ceremony on March 12, 2015. The goal with the articulation agreement was to provide Associate of Applied Science (AAS) graduates in various programs at Albany Tech with an opportunity to continue on with Albany State University to earn their Bachelor of Applied Science in Technology Management degree.

Albany Technical College also celebrated another year of being named a Tree Campus USA. The College has been named Tree Campus USA since 2008 for its dedication to campus forestry management and environmental stewardship.

Albany Technical College, a Tree Campus USA, celebrated Arbor Day on March 4, 2015. George Paul, Environmental Horticulture instructor at Albany Tech, selected a live oak, which is the Georgia state tree. The tree was planted in the large span of grounds between the Center for Excellence in Technology and the Nathaniel Cross Health Care Technology building.

Albany Tech Held Pinning Ceremony for First ASN Class Albany Technical College held a special Pinning Ceremony commemorating the first graduating class of the Associate of Science in Nursing (ASN) program on April 28, 2015. Keynote speaker for the program was Dr. Dorothy King Garner, former Dean of Healthcare Technology division at Albany Technical College. Being the first class graduating since Albany Tech began the ASN program in 2012, many of these students had to manage their studies, along with

employment and family obligations. The program was offered in the evenings only with long clinical hours. Five of the 15 students being pinned had already secured employment, including three at Phoebe Putney Memorial Hospital, one at a doctor’s office, and one at the VA Clinic.

Werhner Washington, Plant Manager at the Albany Procter & Gamble Company (P&G) and Albany Technical College Board Member, was featured as the May “Faces of Manufacturing in Georgia,” a segment produced by the Georgia Manufacturing Extension Partnership (GaMEP), a part of the Georgia Tech Enterprise Innovation Institute. In the feature, Washington cited Albany as the place where he received his first job and how he has now returned to Southwest Georgia where he started his family and launched his career. Eleven years after getting his start in Albany, Washington worked in another P&G plant in Pennsylvania and later, at P&G’s corporate headquarters in Cincinnati, Ohio. Washington began service on the Albany Technical College Board of Directors in September of 2014. In

The Albany Technical College Titans Alliance Team 5536, who placed in some regional and national competitions earlier in the year, volunteered for the event and helped other pre-rookie teams from around the local area learn about competition robotics, as well as introduce them

to the world of engineering. The Alliance is comprised of both high school and college students currently enrolled in one of Albany Tech’s Engineering and Computer Information Systems degree programs.

1,238 Number of People Trained in Economic

Inside an 18 by 16-foot room with a fully functional x-ray machine, the newly energized lab has a patient table capable of moving up and down and a floating tabletop capable of

moving in four directions. It also has an upright image receptor holder that is adjustable in height to accommodate the different types of upright exams. There is also an observation window so that students can observe procedures from the outside of the room, as well as a spacious control area inside the room that can accommodate additional students.

In an effort to support gender equity and to promote diversity among Technical College System of Georgia (TCSG) colleges, the WIHE Leadership Conference was designed to connect TCSG women with GAWHE for networking and for the women to have the opportunity to engage in professional development opportunities. The conference was also designed to connect with ACE’s Women’s Network and broaden the awareness of ACE’s “Moving the Needle” Initiative, which was created to promote gender equity and diversity in higher education.

Albany Technical College was awarded a grant in the amount of $22,390 from the Georgia Driver’s Education Commission. The grant will help finance driver’s education locally by providing classes with 30 hours of classroom instruction and six hours of behind-the-wheel experience with a trained instructor.

American Proteins Donated Scholarship to ATC Foundation Harry Wilson, Human Resources and Safety Manager for American Proteins, Inc., presented Dr. Anthony Parker, President of Albany Tech, with a check for the Foundation’s scholarship funds in the amount of $16,000 on December 15, 2015. This marked the tenth year in a row American Proteins has given the donation to the Albany Tech Foundation. Forsyth County business and civic leader, Tommy Bagwell and his wife, Chantal, established the

$500,000 Bagwell Family Scholarship Endowment to provide scholarships for students attending technical colleges located near their family business locations. The family business, American Proteins, Inc., currently has five locations, including one in Cuthbert, GA. Scholarship recipients are chosen using the following criteria: financial need, proximity to the company’s operation sites and the likelihood of their success.

Among the list of graduates for the evening’s ceremony was 2015 Georgia Occupational Award of Leadership (GOAL) winner and Medical Assisting student, Jerri Jarrell, who said she came back to school after deciding it was time for her to do something for herself and pursue her passion to work in the medical field.

BOARD OF TRUSTEES JOE AUSTIN

ALBANY — Albany Technical College has appointed new members to fill two vacant seats for Dougherty County on the Board of Directors.

David C. Mosely, superintendent of the Dougherty County School System, and Werhner V. Washington, plant manager for Procter & Gamble, will begin serving on the Albany Tech Board of Directors at the September meeting today. Currently serving as the superintendent for the Dougherty County School System (DCSS), Mosely has served in the interim capacity in three Georgia school systems and with board conflict resolutions for the past year. He retired as superintendent of the Glynn County School System in 1999 completing 34 years of full-time service in public education, distinguishing himself with many recognitions, including being honored as the Georgia Association of Educators Leadership State Superintendent of the Year in 1999. Prior to being named to his first superintendent post for Decatur County Schools in 1985, Mosely served as a classroom teacher, varsity basketball coach, assistant principal, and principal. He BETTY WHITE has also served as an adjunct faculty member of NOVA University teaching in the Education Dougherty County Representative Leadership program, where he earned his doctorate degree in 1996. He received his specialist Retired degree from Valdosta State University and both master’s and bachelor’s degrees from the University of Georgia. He also holds the Georgia L-7 Leadership Certification. In civic and community activities, Mosely has served as Chair of the Decatur County Board of Commissioners and provided leadership on the boards of the Decatur County Chamber of Commerce, the Climax Community Club, the

A Unit of the Technical College System of Georgia,Albany Technical College is an Equal Opportunity Institution and does not discriminate on the basis of race, color, national origin, gender, age or disability. 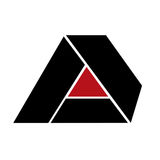