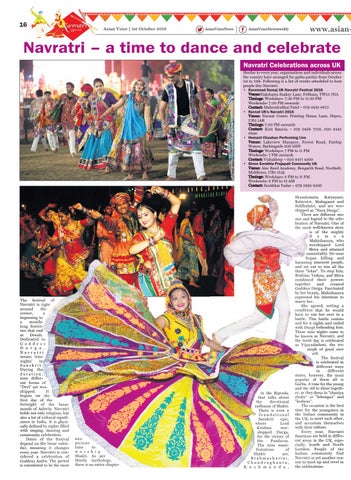 The festival of Navratri is right around the corner, a beginning to a monthlong festivities that end at Diwali. Dedicated to G o d d e s s D u r g a , Navratri means 'nine nights' in Sanskrit. During the duration, nine different forms of "Devi" are worshipped. It begins on the first day of the fortnight of the lunar month of Ashwin. Navratri holds not only religious, but also a lot of cultural significance in India. It is physically defined by nights filled with singing, dancing and community celebration. Dates of the festival depend on the lunar calendar, meaning it changes every year. Navratri is considered a celebration of Goddess Amba. The period is considered to be the most

auspicious time to w o r s h i p Shakti. As per Hindu mythology, there is an entire chapter

in the Rigveda, that talks about the devotional sadhanas of Shakti. There is even a foundational Sanskrit epic, where Lord Krishna worshipped Durga, for the victory of the Pandavas. The nine manifestations of Shakti are, Brahmacharini, Chandraghanta, K u s h m a n d a ,

Skandamata, Katyayani, Kalaratri, Mahagauri and Siddhidatri, and are worshipped as "Nava Durga". There are different stories and legend to the celebration of Navratri. One of the most well-known story is of the mighty d e m o n Mahishasura, who worshipped Lord Shiva and attained immortality. He soon began killing and harassing innocent people, and set out to win all the three "lokas". To stop him, Brahma, Vishnu, and Shiva combined their powers together and created Goddess Durga. Fascinated by her beauty, Mahishasura expressed his intention to marry her. She agreed, setting a condition that he would have to win her over in a battle. This battle continued for 9 nights and ended with Durga beheading him. These nine nights came to be known as Navratri, and the tenth day is celebrated as Vijayadashmi, the triumph of good over evil. The festival is celebrated in different ways in different states, however, the most popular of them all is Garba. A time for the young and the old to shine together, as they dress in "chaniya cholis" or "lehenga s" and "kediyus". The occasion is the best time for the youngsters in the Indian community in the UK, to meet each other, and accustom themselves with their culture. Every year, Navratri functions are held in different areas in the UK, especially, South and North London. People of the Indian community find Navratri as yet another reason to meet up and revel in the celebrations.

While Kolkata is getting ready to celebrate Durga puja with pomp and gaiety, Britain is not very far away. In London, one of the most renowned of all is a puja by Dusherah CommitteeCamden, supported by BritIndian billionaire Shri Lakshmi Mittal. This will be held at the Camden Townhall, like every year, and will have festivities spread across 5 days, including 'Aarti, Pushpanjali, Bhog (prashad)' and cultural activities. On the first day (Mahasashti) on October 7th, after formal inauguration, there will be Mahishashurmardini collosal dance ballet. On new day, Mahasaptami, there will be a Bollywood Bonanza, performance by Eastern Euphony and Rikta Mukherjee. On October 9th, there will be Sandhi puja and live concert-Sundor Swornali Sondhya and Bandel Main line. On Mahanabami (Oct 10) there will be a Tagore night by Soma and teamkolkata. And finally on Dusserah, there will be a grand concert by popular artist Aneek Dhar. Harrow based charity Panchamukhee are presenting Durga Utsav in Harrow between 7th and 11th October at the Harrow Arts Centre. Now in its 11th year, the 2016 festival programme is an exciting mix of artistic and cultural flavour. The free 5 days event provides the opportunity for families of all different communities to come together and experience the music, dance, theatre and food that celebrates the cultural mosaic of today’s Britain. The 2016 festival was enjoyed by over 8,500 people from all over the country and this year’s looks set to beat all records. The festival kicks off with an inaugural event at 7pm on Friday 7th October. Organiser Saikat Barman told Asian Voice “Panchamukhee Durga Utsav is about bringing together people from all different backgrounds and communities to share and learn about the cultural diversity in Britain. This event is a shining example of community cohesion that can be enjoyed by the whole family completely free.” London Sharadiya Utsav or famously known as LSU will be hosting its 4 days of Durga puja celebrations at the Ealing Town Hallincluding Realty show as well as a Mela. There will be display of Jute and Handicraft products from Bengal and Patachitra arts. Cultural programmes will include Bollywood Quiz Contest and a Prize Distribution for the winners of the LSUI Cricket Day and Harrow Music Festival. LSU Members are gearing up for an on stage Baluchari Festival. The LSU idol was also featured in an

Durga puja by LSU at Ealing

American TV Channel for a sitcom this year. This year's LSU Brochure is expected to be a collectors' item and promises to include Bengali comics and writings of tester years (Nantey Fontey, Hada Bhoda etc, Gogol, Kakababu stories), in English for the generation next and is evoking a strong nostalgic feeling for the seniors. After the huge success of the Global Connect delivered

in association with Brand Next, India, LSU is planning a full fledged Antakshari contest with Kolkata (through live streaming), besides the usual hits of last year like Dhaker jugalbondi (playing the dhal or drum togehter at Kolkata and London), and Adda with Kolkata. LSU has built up a very strong and productive association with the Kolkata based Charity called Banchbo- their Back to

The heritage of Durga Puja and Clay making image in Wales project were conceptualised by Wales Puja committee in 2015. The project lead were Dr Sandip Raha and Mr Neeleem Saha. After many preliminary meetings and discussions with Heritage Lottery Fund (HLF), as well as 3 local high schools (Radyr Comprehensive, Llanishen high and Cardiff High schools) in December 2015 / January 2016 and partnersCardiff story Museum, Wales for Peace, Wales Centre for International affairs, Cardiff school of Arts & design, Cardiff Metropolitan University, Bute town History and Arts centre a final application for grant was made to HLF. The project was to trace, collect, and archive of Durga Puja festival in Wales for last 45 years and make a digital archive as well as build a full size five piece Clay image of Goddess Durga and her children in Cardiff by visiting sculptors in summer 2016. Before, during and after this clay image making process three local high school arts students (GCSE level) and Art students from Cardiff Metropolitan University were going to attend and learn the heritage of clay making process and University art students were going to actually participate in making the Clay images long with sculptors from India. In Spring 2016 two artists from Kolkata (Sunil Pal & Dibyendu Dey) were contacted and preliminary

meeting took place with them in Kolkata following approval of Grant from Heritage lottery fund in February 2016. Artists (Pal and Dey) arrived in UK on 2nd June and started the clay image making project on in Bute Town History and arts centre in Cardiff. There were 4 workshops for High school students. Volunteers from Puja committee had training in collecting oral history and how to upload files and pictures on Wales for peace website. All three schools had briefing workshop for their year 9 (year 8 in Cardiff high) in April organised by volunteers from Wales Puja committee and School art teachers. A Project Launch event was held in Cardiff School of Art & Design in Llandaff campus. Collection of heritage history continues and complete images for public display were held in Cardiff Story Museum, Hayes, Cardiff from 8th – 20th August 2016. Images stored will be worshiped at the wales Puja Committee Durga Puja in Penyrheol Community Centre, Penyrheol, Caerphilly from 7-11 October 2016. The Wales Puja Committee team are in the process of making a film about the whole project including the durga puja festival this year and taking feed back and interviews from all those who have been involved so far including children from High Schools and Cardiff Arts & Design school.

Heritage of Durga Puja and Clay Image making in Wales

School Scholarship Program, where the high performers of Madhyamik and Higher Secondary exams (equivalent of GCSE and A-Levels respectively) from the distant villages of the Sundarbans and Puruliya in West Bengal (India), were given scholarships to continue their studies, met with spectacular success- the children were handed over a cheque in August in an event, where the LSU kids from London (Rajvir, Aaaditya Som, Abhirup, Akanskha and Koustav, Dipendra and Aditya Mukhopadhyay), played different musical instruments

and sang the Kishore Kumar Song while the Sundarban kids danced to it, in a unique London- Sundarban joint production, a first of its kind. With Banchbo and the UK Puja Organisations of Bengali Midlands Association Birmingham, Wales Puja Committee, Cardiff, Indian Cultural Society, Cambridge, and led by LSU, they have started an initiative called 'Prabsheer Chokhey Desheer Shera Pujo'- aimed at promoting inward Durga Puja tourism into Bengal/Kolkata, this was a huge success last year, after a modest start in 2013- the winners were given prizes and certificates signed by Pele, the football legend. Besides these there also will be Durga puja celebrations in London by Sanatan Association in Bethnal Green, South London Durga Puja at Mitcham, Bengali festivals puja at Wembley, London Durga Puja Association at Belsize Park, Hindu Pragati Sangha at Manor Park, 42 year old Bengali Cultural Association UK in East London (Ilford)- which will feature music by Madhumita Banerjee on Saptami, Bhajan by Virendra Chopra on Ashtami, dance by Swapna Mukherjee on Nabami, and dance by Rangani Chakraborty and music by