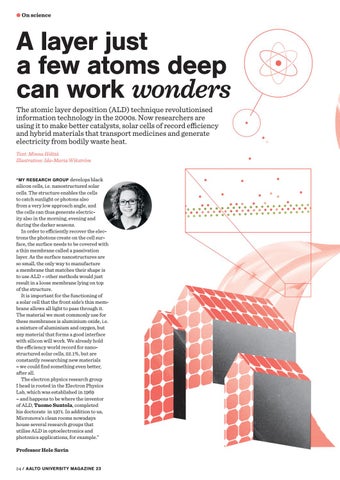 A layer just a few atoms deep can work wonders The atomic layer deposition (ALD) technique revolutionised information technology in the 2000s. Now researchers are using it to make better catalysts, solar cells of record efficiency and hybrid materials that transport medicines and generate electricity from bodily waste heat. Text: Minna Hölttä Illustration: Ida-Maria Wikström “MY RESEARCH GROUP develops black silicon cells, i.e. nanostructured solar cells. The structure enables the cells to catch sunlight or photons also from a very low approach angle, and the cells can thus generate electricity also in the morning, evening and during the darker seasons. In order to efficiently recover the electrons the photons create on the cell surface, the surface needs to be covered with a thin membrane called a passivation layer. As the surface nanostructures are so small, the only way to manufacture a membrane that matches their shape is to use ALD – other methods would just result in a loose membrane lying on top of the structure. It is important for the functioning of a solar cell that the front side’s thin membrane allows all light to pass through it. The material we most commonly use for these membranes is aluminium oxide, i.e. a mixture of aluminium and oxygen, but any material that forms a good interface with silicon will work. We already hold the efficiency world record for nanostructured solar cells, 22.1%, but are constantly researching new materials – we could find something even better, after all. The electron physics research group I head is rooted in the Electron Physics Lab, which was established in 1969 – and happens to be where the inventor of ALD, Tuomo Suntola, completed his doctorate in 1971. In addition to us, Micronova’s clean rooms nowadays house several research groups that utilise ALD in optoelectronics and photonics applications, for example.” 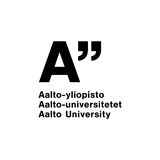