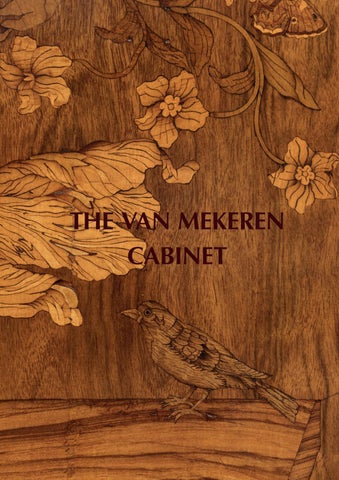 The cabinet and all its oak bases have been retained in the original state. The whole cabinet is covered with floral marquetry veneer of various woods, including walnut, holly, laburnum, boxwood, satiné rubané, amaranth, tulip wood, barberry, elm, sycamore, olive wood, padouk and king wood. A modest rectangular cornice over a frieze inlaid with marquetry of various flowers over two doors with marquetry depicting urns on a plinth issuing bouquets of tulips, bluebells, cornflowers, marigolds, irises, peonies, daffodils, crown imperials, roses, lilies, anemones, chrysanthemums and carnations; several different species of butterflies and moths, including Arctia caja, swallowtails, garden white, meadow brown, and a brimstone butterfly, at least three different bird species, including turtle dove, thrush, and warbler, and a garden snail, Cepaea hortencis. The sides each centred by an oval also with garlanded urns issuing bouquets of flowers. The doors opening to a plain interior with two shelves, two drawers and three base drawers, all multiple wood veneered. The original, partly hollow oak bases of the doors have been filled, in the 1970s, with a board material for stabilisation. The reverse of the doors inlaid with a rosewood star. Below the doors a conforming border and a large drawer also inlaid with small flower bunches. The legs, joined by waved Y-shapes stretchers, each consistently inlaid with flowers.

Provenance: The present and V&amp;A cabinet were both possibly ordered by Jens Wijbergen, a Dutch merchant living in Copenhagen. According to the Van Mekeren archives an order was placed by Wijbergen in 1700, probably for two cabinets, because the price was comparable to

other orders for a pair of Van Mekeren cabinets. The previous owner of the present cabinet, living in Austria, is a descendant of a patrician family from Riga. Some members of the Danish Wijbergen family are known to have moved to Riga in the early 18th century.

Jan van Mekeren, born in Tiel 1658, moved to Amsterdam in 1687 where he was recorded as ‘kabinetmaker’ or ‘kistenmaker,’ and where he married Maria Hovinck, 26 years old. Before moving to Amsterdam, Jan van Mekeren had been in London in 1682 where he had asked to be admitted to the Dutch Reformed Church. He apparently wanted to stay for some time in London presumably to learn the art of furniture marquetry. In 1687 he is mentioned as guildsman, member of the St. Josef guild in Amsterdam. Apparently, he was quite successful as cabinet maker because in 1693 he bought a house in the expensive Kalverstraat and extended his business into the wood trade as well. Since the head-quarter of the VOC was in Amsterdam the city was the foremost European market for exotic woods in the 17th century.

Jan and Maria had six children. Jan intended his first son Fikko, born in 1693, to succeed him as cab-inet maker but unfortunately Fikko died in 1731. After Jan’s death in 1733 the wood trade was con-tinued by his daughter-in-law but there was no one able to continue his cabinet making business. Despite a 1624 regulation stipulating that members of the Amsterdam cabinetmaker’s guild who offered their wares for sale in the guild’s shop, furniture makers in the 17th and 18th century Holland hardly ever marked their work. However, thanks to the inventory after Jan’s death, there is a good list of his workpieces with thorough descriptions, prices, and the names of his clientele. The estate included many finished and unfinished pieces of furniture, a large collection of cabinet woods, and, most interesting, a long list of claims with names of the debtors and the amounts due. Most debtors were well known Amsterdam patricians, only a few were from outside Amsterdam, including Jens Wijbergen from Copenhagen, who still owed Jan van Mekeren fl. 33,13.

Because of a very close resemblance, this cabinet possibly is the pendant of the Van Mekeren cabinet now in the Victoria &amp; Albert Museum (W.5:1 to 14-1986). There are minor differences in the flower-decorations on the doors and sides of the cabinet, but a pair of Van Mekeren cabinets in castle Amerongen, ordered as a pair, look less like each other than the present cabinet and it’s possible pendant in the V&amp;A. During the second half of the 17th century flower paintings became popular and among the most famous flower painters were two women: Maria van Oosterwijk

(1630-1693) and Rachel Ruysch (1664-1750). Jan van Mekeren’s flower bouquets issuing from urns on a plinth bear close resemblance to the bouquets painted by these two women artists. Only six other van Mekeren cabinets are known: one in the Rijksmuseum Amsterdam (inv. R.B.K. 1964-12), one in the The Metropolitan Museum New York (1995, 371a, b), one in the Victoria and Albert Museum, one in Charlecote Park, Warwickshire, and a pair in Amerongen Castle, the Netherlands.

- Adamson G., The Labor of Division: Cabinetmaking and the Production of Knowledge, in Cook H.J., Meyers A.R.W., Smith P.H. (eds), Ways of Making and Knowing: The Material.

More images and further readings can be found at www.zebregsroell.com This catalogue and previous ones can be viewed at www.guusroell.com

JAN VAN MEKEREN (1658-1733): A newly discovered cabinet by the Master of Marquetry. Because of a very close resemblance, this cabinet possibly is the pendant of the Van Mekeren cabinet now in the Victoria & Albert Museum (W.5:1 to 14-1986). There are minor differences in the flower-decorations on the doors and sides of the cabinet, but a pair of Van Mekeren cabinets in castle Amerongen, ordered as a pair, look