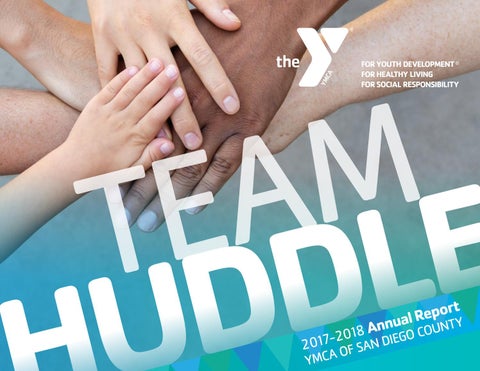 PRESIDENT’S LETTER TEAM YMCA: What does “Together One Y” really mean to the YMCA of San Diego County? To us it represents our organization working together for a common good. It means a heightened awareness of equality and equity in all service aspects of our YMCA.

Our gymnastics teams continue to put on great routines, racking up many perfect 10s this year! While it is a team sport, read on to learn more about one stellar individual performance this season.

Through working together, we are fulfilling the mission of our Y every day. Our mission is what drives us. For the next seven years the strategy is simple - All Families Count! Bringing People Closer. This laser-focus will continue to bring our Y to more people in more places in an equal way.

In the pages that follow you can read about our strong performance over the last 12 months. Our Association continues to focus on quality service to all and work towards our strategic plan: Vision 2025.

We’re putting great focus into our environmental sustainability – a topic deeply rooted in our commitment to social responsibility. Read on to learn about which facility was awarded LEED Gold certification, and about our multiple solar projects!

Through that vision, we plan to double our impact by serving more people in more locations in an equal way – ultimately helping our communities to also become gold medal teams!

At the Y we share a commitment to nurturing the potential of all members, giving back and supporting our neighbors.

Each year we celebrate a wide variety of “wins,” and this year is no exception. The following describes a few from our highlight reel:

We are grateful for your continued support and tireless commitment to our mission. Go team!

Donors are an important part of the team! Because of the collective commitment to serving youth and families in San Diego County, we raised $6.7 million during our Annual Campaign, we raised approximately $7 million in capital, and our endowment grew by $4.28 million.

Innovation is not only found in our state-of-the-art facilities or with our fitness equipment. Innovation is found in our programs as they continue to evolve and our teams find new ways to serve the community. This report will tell you more about an innovative program that provides swimming lessons with those with autism. This program received the YMCA of San Diego County Innovation Award in January!

STEM is the buzz and we’re proud our Child and Youth Development team continued to move forward in their professional development, helping to ensure we stay ahead of the pack and honor our youth development pillar.

We have a great (and big) team! We continue to be one of the largest employers in the County with more than 5,500 employees annually. We can’t put our mission to work without all of our dedicated part-time and full-time staff.

We opened YMCA Expanded Learning Programs (ELP), a branch composed of federally funded before- and after-school programs for students in vulnerable communities. With over 95 school sites and over 14,000 students enrolled, this places our Y as the 3rd largest provider of ELP programs in California.

BIG GAME HIGHLIGHTS Swimming with Autism The Copley-Price Family YMCA’s Swimming with Autism program received the YMCA of San Diego County’s Innovation Award — and for good reason. This unique program isn’t offered widely in the community. Five-year-old Leo was diagnosed with autism at an early age. His family searched for swim lessons for their son for some time. They were extremely grateful when they saw the Y offered the lessons. After spending more than seven months in the program, Leo was able to jump into the pool and swim back to safety. The lessons have not only helped him with his swimming abilities, but also with his speech and social skills.

Gymnastics- Nationals You have teams in gymnastics, but Kaitlin Garcia, a 15-year-old high school freshman and Mission Valley YMCA gymnast, stood out this year by excelling on a personal level. Kaitlin qualified for nationals for the first time, representing the California, Utah, Arizona and Nevada region’s top seven athletes. The only YMCA gymnast in her age group, Kaitlin went on to WIN the all-around – something that hasn’t happened in our Association for over a decade! Kaitlin dedicated the win to her coach Todd Cooper who passed away a few weeks before the meet. Gymnastics Director Ashley Kurth notes that Kaitlin is an “awesome kid who gives 100 percent all the time,” but is still a kid who enjoys other sports as well. “It’s special that the Y can offer this program and the training to get to an elite level without all of the pressure,” added Kurth.

The All-Academic Team STEM (Science, Technology, Engineering and Mathematics) continues to grow in popularity. This year, more than 180 members of our Child and Youth Development (CYD) team throughout San Diego County participated in STEM training in collaboration with The Energy Coalition (TEC). The trainings were the first of many steps the Association is taking to increase professional growth opportunities within the CYD department. Opportunities like this have a direct impact on the quality of our programs, and thus, the youth and families we serve!

Dan McKinney Family YMCA The Dan McKinney Family YMCA in La Jolla completed the final phase of a $21 million expansion and renovation project in January 2018. The Y unveiled new robust and fun spaces for youth including renovated areas for preschool, after-school child care, a youth studio for children’s classes and an Adventure Center featuring a three-story play structure. Earlier phases included the main building with a state-of-the-art wellness and fitness center, locker rooms, and space for members and the community through meeting rooms, an outdoor terrace and patio, café and more. This project is part of the Y’s vision to serve more people in more communities in an equal way through state-of-the-art facilities, programs and accessibility.

Beach and Bay Family YMCA In partnership with the San Diego Unified School district, the YMCA took over the old library of Pacific Beach Middle School and officially opened a YMCA Development and Outreach office on July 17, 2017. As a part of the YMCA of San Diego County’s strategic vision, the Y is planning to expand its services and presence in the beach and bay communities by building a state-of-the-art YMCA in Pacific Beach. While fundraising efforts are in progress and the project itself won’t be realized for a few more years, community interest and programming has already taken off – even without a “traditional” branch. This includes an outdoor fitness area and San Diego’s first padel tennis courts.

OUR TROPHY CASE With a focus on youth development, healthy living and social responsibility,

The Y arena soccer experience is a routine we can count on every weekend to get us out of the house and off the video games.

our true wins are in the feedback we receive. Read on for what parents say about our sports programs (but donâ&#x20AC;&#x2122;t forget about the great programming we offer for adults and seniors too!):

All the counselors were very positive and upbeat; you can tell they really enjoy their job and that enthusiasm is contagious and inspiring to our kids. My child is fit, enjoys a challenge and has learned about sacrifice, hard work and being a positive role model for others.

We have really enjoyed the programs offered at the Y. They build character and connect our family to other children and parents within our community.

My 5-year-old son is taking swimming lessons. He improves each week giving him a sense of accomplishment. Plus, he has fun!

My child was unsure of himself. Once joining his YMCA soccer team, he gained confidence and became more independent!

She has grown and developed as a gymnast and a pre-teen, in part through the staff’s mentorship and encouragement, and she’s more confident, caring and responsible because of their influence.

Our son LOVED Camp Surf! He made new friends, played outside all day, and he wasn’t stuck in front of a screen.”

The coach is encouraging and provides a safe and positive environment for the kids to thrive and learn new skills. 6

THE HERITAGE CLUB THE HERITAGE CLUB The purpose of the YMCA of San Diego County Heritage Club is to encourage thoughtful gifts as a primary means of building a strong endowment capable of providing lasting support for the YMCA’s mission. We recognize those whose leadership, service and devotion to the YMCA have made them members.

The members of the YMCA of San Diego County Heritage Club believe in the mission of the YMCA and share its ideals and traditions. They have made a commitment to ensure that this heritage is continued for future generations. The tradition and planning for the Heritage Club began in 1979 as a dream of YMCA leaders. It has grown through the years as a result of many individual contributions, both large and small, and through careful management. As of June 30, 2018, the Heritage Club has more than 1,200 active members. BEACH AND BAY Anonymous BORDER VIEW Cindy & Emilio Alvarez Judy & Victor Botello *Jorge Candon Desiree & Art Castanares Sarah & Sean Evans Martha & Jorge Garcia Benjamin Green Sam Hernandez Meza Model & Sataya Hong Rosemarie Hudson Jennifer & Rich Loretta Deanie Marin-Lucchesi & Brian Lucchesi Wendi & Robert Messina Judith & Dave Nielsen Rick Otis COPLEY-PRICE Anonymous Carol & Tim Barry Darah & Tom Basham Kim Bird Carla Buff Nancy & Robert Busley

Change in net assets before net unrealized gain on investments

EXCESS OF (DEFICIT) REVENUE OVER EXPENSES

OUR MISSION The YMCA of San Diego County is dedicated to improving the quality of human life and to helping all people realize their fullest potential as children of God through the development of the spirit, mind and body. YMCA OF SAN DIEGO COUNTY 3708 Ruffin Road . San Diego, CA ymca.org