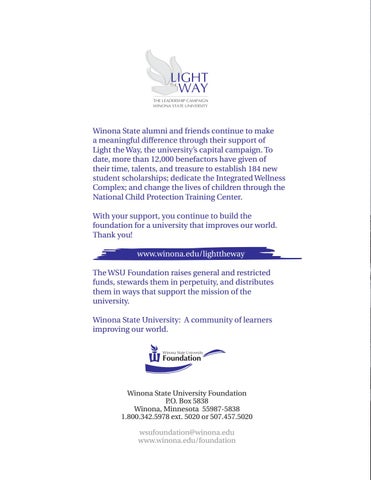 Winona State alumni and friends continue to make a meaningful difference through their support of Light the Way, the universityâ&amp;#x20AC;&amp;#x2122;s capital campaign. To date, more than 12,000 benefactors have given of their time, talents, and treasure to establish 184 new student scholarships; dedicate the Integrated Wellness Complex; and change the lives of children through the National Child Protection Training Center. With your support, you continue to build the foundation for a university that improves our world. Thank you! www.winona.edu/lighttheway The WSU Foundation raises general and restricted funds, stewards them in perpetuity, and distributes them in ways that support the mission of the university. Winona State University: A community of learners improving our world.

reveals WSU-logoed shirts and sweatshirts everywhere. Purple Pride is strong. I am humbled by the roles your generosity and the WSU Foundation play in the success of Winona State. In 201011 the Foundation, on your behalf, contributed $1.6 million to support students and academic programming at the university. Without your support we would be a shadow of what we are today. Did you know that only 23 percent of the university’s budget comes from the state? We are state assisted, not state supported. Your continued support is critical: please consider an endowed scholarship to build a strong base for generations of future scholars. And consider joining our 1858 Founders Society, which recognizes donors who have made estate-planning provisions to benefit Winona State.

Message from the Foundation Chair

t our fall 2011 meeting, the WSU Foundation board heard a presentation on why students chose Winona State University. Not surprisingly, the natural beauty of the Upper Mississippi River valley was high on the list. More surprising to some was the sense of community that prospective students felt when they visited the campus. People they met were nice and seemed to care. Doors were held open. People smiled. The campus felt safe. We learned that 46 percent of our undergraduates are first generation college students. Think about that for a moment. In 2011, one out of two students has no immediate family member who can model the college experience. No wonder they yearn for a place they can feel at home. Not surprising is four of five students who visit campus apply, and over 80 percent of our students qualify for financial aid. Your contributions fill a significant void for our students, and in our society. This fall, undergraduate enrollment at WSU reached an all-time high with 1873 new freshman and 628 transfer students. We are the “University of Choice” in Minnesota. Once on campus, more than two-thirds of our students participate in community service. A walk across campus

Our trustees remain committed to grow and preserve WSU Foundation assets. We have outperformed industry benchmarks during these turbulent financial times. We have extended our membership to include representatives from across the country. We are a volunteer board and cover all expenses. We are supported by university staff, but incur no personnel costs, ensuring that your contributions go where they are needed most: to support the WSU mission. We meet three times a year and in 2012 will hold a retreat to ensure our activities and goals are in line with the Foundation mission statement:

We exist to raise general and restricted funds, steward them in perpetuity, and distribute them in ways that collaboratively support the mission of the university. We recognize those who give and we serve as a university advocate. The entire Board of Trustees joins me in thanking you for your generosity. You are the model for our students. You help us create an environment that is safe and caring, a place committed to improving our world, a place where it’s “cool” to be proud of your school. Let’s all continue to be Warriors for life. Sincerely,

A special thank-you to our retiring trustees:

Double your gift! Thousands of companies match the charitable contributions of employees, as well as those of spouses and retired employees. Find out if your employer has a matching gift program. Check with your human resources office or contact us at 1.800. CHAT-WSU ext. 5020 or 507.457.5020. The WSU Foundation Annual Report and Donor Honor Roll recognizes gifts given during the FY11 fiscal year (July 1, 2010 to June 30, 2011). In a report such as this one, every effort has been made to ensure accuracy; however, it is inevitable that some omissions and errors may occur. If your name does not appear, or should it be misspelled, please notify the WSU Foundation Office so that we can correct our error and offer our apologies. Please telephone 800.CHAT-WSU, extension 5518, or 507.457.5518.

Giving to the President’s Club increased by 46% this year!

Create your legacy, and shape the future of Winona State. Include a gift to the university in your estate and financial plans. Explore the ways you can have a lasting impact at www.winona.edu/plannedgiving

Society names were chosen to reflect names common to the architectural features of buildings, because the WSU Foundation is building a better Winona State University through the significant efforts of its benefactors. ALUMNI 1927 (25.00%) Benchmark Society ($100-$249) Helen Strand

The WSU Foundation provided more than $64,000 to faculty and staff through 40 Special Projects Grants over the past year.

WSU Foundation Special Projects Grant: Student-Athlete Success Center Winona State teams scored a record 3.24 average cumulative GPA for the spring 2011 semester. A big part of the game plan for the Warriors’ classroom success is the StudentAthlete Success Center, recipient of a 2011 WSU Foundation Special Projects Grant. The SASC provides advising, tutoring, study skills, and test preparation support to help student-athletes succeed while they’re on campus, and career and financial skills development for life after graduation. Director of student-athlete services Mike Turgeon leads a staff of six, five of whom are Winona State assistant coaches and one a graduate assistant. The SASC used its Special Projects Grant combined with support from the Warrior Club to furnish and equip two rooms in Wabasha Hall for student-athlete study halls, teaching, and presentations.

More than 12,000 donors have made Light the Way, the WSU capital campaign, a success. Thanks to you, 184 new scholarships have been created; the Integrated Wellness Complex has been making our community healthier since it opened in 2010; and the National Child Protection Training Center has trained more than 17,000 professionals in the last year alone.

I started student teaching this fall in a fifth grade classroom. I am excited to be so close to my dream. Without scholarships like this, there would be many students unable to pursue the careers they’ve dreamed of.. Brenda Bankers June M. Braisted Scholarship Mora, Minn.

Next year I will be completing my general education courses and coaching minor. This summer, I have a great opportunity to do an internship where I will be working with athletes training for the Olympic Games. Scholarships have allowed me to have opportunities such as this one, and do the things I love. Michelle Potter Loren Benz &amp; Mark Patterson Family Wellness Scholarship Stockton, Minn.

Through your generous gifts, the Warrior Club provided $150,000 for student-athlete scholarships in 2010-11. GO WARRIORS!

Thanks to all of you, the Warrior Club membership campaign is approaching a record goal of $100,000!

The State of Minnesota funds only 22% of the total WSU budget, making the need for your private support more important than ever. We invite you to join us in improving the world by investing with us to make a difference.

I am the first woman from my family to come to the United States for an education, and I hope to set an example for my younger siblings. This scholarship has certainly helped to lighten the financial burden for me as well as my family.

Winona Currents is a publication of Winona State University.