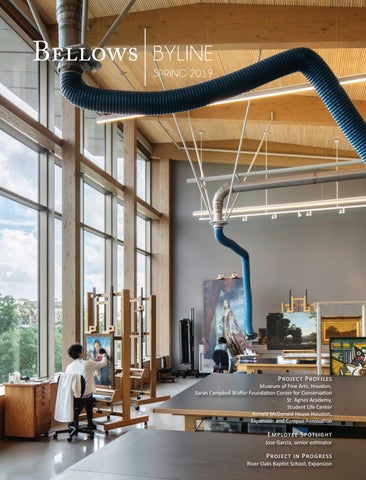 Elevating Art As you approach the corner of Fannin and Binz, your attention is drawn upward to a series of four glass-and-steel boxes cantilevering over the edges of the existing Bellows-built MFAH parking garage. This chic industrial structure is the new Museum of Fine Arts, Houston Center for Conservation. The new, two-story facility is comprised of 23,796 square feet of conservation studio and support space on the second floor with dedicated studios for painting, textile, sculpture, and decorative arts, as well as space for storage, framing, imaging, and other support activities. The remaining 14,781 square feet are dedicated to mechanical space on the first floor. For years, the Museum’s conservation department was divided among separate buildings located miles apart. The Center for Conservation brings the Museum’s distinguished team under one roof in one of the largest, continuous spaces for conservation in any public museum. The site’s proximity to the curatorial offices across the street also allows the conservation teams to collaborate closely with their colleagues and fosters greater collaboration and synergy between departments.

The biggest benefit for the team is the on-campus location where artworks may be transported directly from the gallery and up to the conservation lab as opposed to an off-site facility. “Our team can now easily collaborate across all areas of the MFAH—from the collections on the main campus to those in our decorative arts house museums, Rienzi and Bayou Bend Collection and Gardens—using the most advanced technology in a space that was designed with the conservation and care of the Museum’s varied collections specifically in mind,” said David Bomford, Conservation Chair until July 2019. Architecture firm Lake | Flato created a design that was driven by the concept of light, resulting in a central corridor that divides the day-lit studios from the spaces requiring darkness. The Center for Conservation was to be built where the existing campus infrastructure was previously located. Before construction could begin on the Center, Bellows had to relocate the emergency generators and cooling towers from one side of the existing garage roof to the other without a loss of power or cooling capacity to the rest of the campus. Storing all of the mechanical support on the first floor of the addition freed up space from ductwork and piping and allowed for 22-foot ceilings throughout the facility. Constructed from tightly-packed Dowell Laminated Timber (DLT) panels joined with dowels rather than nails, the ceiling is both a design and structural element which utilizes both mass timber and steel. This first installation of DLT panels in North America were prefabricated, panelized, and lifted into place, resulting in quicker on-site construction. The structure is left exposed as a finish material to lend the warmth and texture of wood which is whitewashed to reflect daylight into the building. Another construction logistical feat was the concrete flooring installation. Fifty concrete trucks were brought in at one time and lined Main Street. Using large hoses, the concrete was dumped into a huge pile in the middle of the space where tractors were waiting to smooth it out before it set. It was all done over one weekend, which is quite successful in such a highly-trafficked, urban location.

Four studio bays are cantilevered from the building’s north and west façades to celebrate the building’s function and allow a glimpse of the work going on inside. Designed to utilize daylight while protecting the artwork inside, the studio bays are oriented east/west and are topped with shaped roofs and clerestory windows to flood the studios with indirect natural light. The new Center’s specialized studios support the care and restoration of every kind of object the museum owns — more than 70,000 works including paintings, sculpture, textiles, and decorative arts. The Center is equipped with fume hoods for working with solvents, oversized sinks, extractors, and a hazmat shower. The X-ray studio is lead-lined, and equipment in the spray room operates like a jet engine sucking in and removing fumes and dust. Saws, planers, and other woodworking machinery fill another room with a huge dust collector. The now 21-year-old conservation department evaluates objects from the Museum’s collections, reviews potential acquisitions, and examines objects on loan from other institutions. They also conduct fundamental technical research, often collaborating with curators and historians, to evaluate how objects were made and who made them. They have also become a leading resource in disaster response and advise dozens of institutions. The conservationists’ work allows the public to enjoy art exhibits that span centuries and keeps the work of each artist alive for the Museum’s visitors and members. Due for completion in 2020, the 14-acre campus masterplan is the largest cultural project currently under way in North America. This sleek addition of the Center for Conservation redefines the campus’ eastern edge and complements the Museum’s existing structures, furthering MFAH’s reputation of providing spaces that not only feature works of art but are works of art themselves.

In 2016, Head of School Sr. Jane Meyer boldly declared, “There are enough people who believe in Catholic education and women’s education, and they’re going to step up and help us.” And the St. Agnes community indeed stepped up. The Student Life Center campaign kicked off in November 2014 and because of its success, the new 35,000-sf facility is now complete and in use. The campus has been transformed by the school’s boldest project to date, utilizing land previously occupied by athletics on the main campus. Before this expansion, the library was overcrowded, the assembly hall had a limited capacity, and code issues prevented the school from hosting schoolwide gatherings. This expansion was imperative for St. Agnes Academy, which now serves over 900 students. Now, St. Agnes Academy is enjoying the new Auditorium and Performance Hall (Meyer Hall), Student Commons, Jamieson/Chilton Dance Studio, and additional classrooms and parking. Guests enter Meyer Hall through the beautiful Sauer Lobby that serves as an additional event space. The 12,000-sf multi-purpose auditorium seats 1,300 and on the second floor a 3,500-sf balcony doubles as a lecture hall for up to 300. The school’s former 7,000-sf auditorium was transformed into a student commons, and the stage is now the Arthur W. Buckley Theatre, a black box with 120 seats. The commons area now stands at 8,500 square feet and allows for more group work and socializing, and the Spirit Store was upgraded from a small room to a beautiful 1,000-sf space conveniently located off the main driveway. The 4,500-sf dance studio provides multi-purpose space for the school, a home for their yoga and wellness programs, and accommodates up to 87 dancers from the original capacity of only 10. The Student Life Center also includes a speech and debate space with a communications classroom, a health classroom, three multi-purpose practice rooms, three vocal studios, and boys’ and girls’ dressing rooms. The beauty of this project is that every student benefits. Each space within the Student Life Center was designed to be multi-purpose, allowing the school to think of creative ways to use each space.

The Ronald McDonald House (RMH) Houston Behind Every Door capital campaign funded the three-phase renovation project that addressed an increasing need to provide a home away from home to a growing number of families who are seeking medical care for their critically-ill children, natural wear and tear to the building, and a need for a reconfigured floor plan. The ribbon-cutting ceremony on September 27, 2018 unveiled the renovated 50,000-sf flagship building, also built by Bellows, and the newly-built 16,000-sf two-story tower. The first phase involved constructing a new two-story building over an existing surface parking lot. The expansion added 20 new bedrooms to the Holcombe Houseâ&amp;#x20AC;&amp;#x2122;s original 50. These rooms are about 500 sf and include ADA compliant walk-in showers, new room furnishings, and upgraded finishes. The second phase included the renovation of the 50,000sf original building with updates to critical infrastructure, including HVAC/mechanical, electrical, plumbing, and structural elements. These updates replaced original equipment that could not support the larger facility. With backup generators, among other features, Holcombe House will have the capability to keep its residents comfortable and safe if an outage occurs. The renovation includes a new feature wall that extends from the first floor to the ceiling of the three-floor lobby. A larger kitchen with high-end appliances was added to better serve the families and volunteer groups. New playrooms and sports rooms as well as a fully-dedicated classroom were also refreshed and updated. To increase energy efficiency, all of the existing curtainwall glass and punched windows were retrofitted with glazing pocket extrusions and new insulated glass was installed. For the third phase, the 50 existing bedrooms were demolished down to bare studs, revamped, and now feature new flooring, millwork, and tile work as well as updated appliances, fixtures, and technological upgrades. This project enables RMH Houston to better serve more families needing a safe and loving home away from home.

Employee Spotlight Jose Garcia, Senior Estimator Jose Garcia joined Bellows Construction in 2013 after receiving his master’s degree in construction management from Texas A&amp;M University. He earned a bachelor’s degree in construction management from Texas A&amp;M University Prairie View in 2011. Jose began his Bellows career as an estimator, transitioned into project engineer, was then promoted to project manager, and has come full circle, returning to the estimating department as a senior estimator. During his interview at Bellows, he discovered many of the vice presidents and staff have spent their entire careers at the company. That’s when he knew Bellows was the right choice. The seasoned expertise and company history are only part of the reason he loves Bellows. The camaraderie is what he really enjoys. Whether it’s the fantasy football league or company picnics, he appreciates how Bellows always strives to create a fun, family atmosphere. Jose’s most recent project was the Ronald McDonald House Houston Expansion and Renovation. It opened his eyes to the positive impact that non-profit institutions have on our communities and how important it is that we support them in any way we can. “I have been blessed to work for multiple non-profit owners and the appreciation they show towards our staff makes our job even more satisfying.” On his days off, Jose plays tennis every weekend and now that he has a newborn son, Tiago, he tries to catch up on sleep whenever he has the (slim) chance.

Project in Progress: River Oaks Baptist School Expansion Construction began on the 100,000-sf expansion project for River Oaks Baptist School in November 2018. The project includes a new middle school building, underground parking garage, and leadership center. The new four-story Keith and Alice Mosing Middle School features an advanced robotics lab, large maker space, dedicated music rooms for instrumental and choral groups, visual arts studios, and science labs. An added and exciting bonus is that the middle school will have a stateof-the-art performance space with retractable seating in the Petersen Blue Box Theater. Underneath the middle school will be a 150-space parking garage designed to improve traffic flow and maximize green space. In recognition of Susan and Fayez Sarofim, The Sarofim Leadership Center will become the new main entrance to the school and administrative wing. â&amp;#x20AC;&amp;#x153;We believe children become stronger thinkers when they are active learners. The new building will be a mecca of active learning space where our kids can build robots, get messy in a workshop, problem-solve in group settings, or rehearse for a performance,â&amp;#x20AC;? said Head of School Leanne Reynolds. The project will ultimately allow the school to increase its student population by about 10 students per grade level and decrease the student-teacher ratio in classrooms. 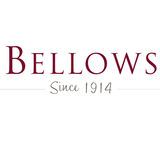