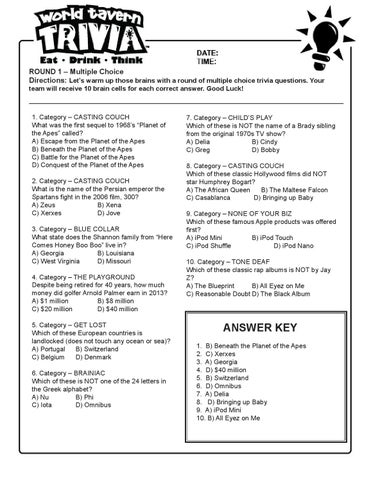 ROUND 1 – Multiple Choice Directions: Let’s warm up those brains with a round of multiple choice trivia questions. Your team will receive 10 brain cells for each correct answer. Good Luck!

7. Category – CHILD’S PLAY Which of these is NOT the name of a Brady sibling from the original 1970s TV show? A) Delia B) Cindy C) Greg D) Bobby 8. Category – CASTING COUCH Which of these classic Hollywood films did NOT star Humphrey Bogart? A) The African Queen B) The Maltese Falcon C) Casablanca D) Bringing up Baby

9. Category – NONE OF YOUR BIZ Which of these famous Apple products was offered first? A) iPod Mini B) iPod Touch C) iPod Shuffle D) iPod Nano 10. Category – TONE DEAF Which of these classic rap albums is NOT by Jay Z? A) The Blueprint B) All Eyez on Me C) Reasonable Doubt D) The Black Album

ROUND 2 - Fill in the Blank Directions: Now that the warm up is out of the way, it’s time to really get those brains a work out! Your team will receive 10 brain cells for each correct answer - Good luck! 1. Category – NONE OF YOUR BIZ What’s the name of the company that donates one pair of shoes to a foreign child in need for every pair of shoes bought in America? 2. Category – BRAINIAC The Salem Witch Trials took place in what century?

9. Category – WHAT THE FUNK In the traditional rules of Texas Hold-Em poker, how many hole cards are dealt to each player at the beginning of each hand? 10. Category – CASTING COUCH Before becoming a bar owner, what MLB team did Ted Danson’s character, Sam Malone, play for?

ROUND 3 - Matching - BRAIN FREEZE CHALLENGE! Directions: Many sports stars have certain numbers or records forever associated with their name. Please match the statistic with the athlete it belongs to. Good luck!

ROUND 3 - Matching - BRAIN FREEZE CHALLENGE! Directions: Many sports stars have certain numbers or records forever associated with their name. Please match the statistic with the athlete it belongs to. Good luck!

ANSWER KEY: DO NOT HAND OUT

1. Category – CASTING COUCH What actor played the villain in both “No Country for Old Men” and “Skyfall”?

9. Category – TONE DEAF What was the name of Alanis Morissette’s best-selling 1995 album, which included hits like “Ironic,” “Hand in Pocket” and “You Oughta Know”?

2. Category – GET YOUR BUZZ ON Which sandwich restaurant chain was started first: Subway or Quiznos?

3. Category – NONE OF YOUR BIZ What car company ran a series of popular ads bragging about its “hemi” engine? 4. Category – LIARS AND CHEATERS How many different US Presidents have had George as their first name? 5. Category – HEAVY PETTING What was the first name of the woman Prince Charles married after the death of Princess Diana? 6. Category – CASTING COUCH Who was Johnny Carson’s sidekick for 30 years of “The Tonight Show”? 7. Category – THE PLAYGROUND Name one of the two major NCAA Division I college football teams known as the Rebels. 8. Category – CASTING COUCH What major TV network does David Letterman’s “Late Show” air on?

ROUND 5 Directions: Each of the questions in round 5 will be worth 10 Brain Cells. You will have approximately 20 seconds to answer each question. Here we go! 1. Category – TONE DEAF Which member of The Beatles played sitar on songs like “Within You Without You” and “Norwegian Wood”?

10. Category – GET LOST How many names of world countries start with the letter, J?

2. Category – CHILD’S PLAY What was the name of the main teacher in the TV show and book series, “Magic School Bus”? 3. Category – BRAINIAC In 1909, which location did Admiral Peary claim to have discovered: the North Pole or the South Pole? 4. Category – WHAZZ UP What was the second book in Stephanie Meyer’s “Twilight Saga” called? 5. Category – THE PLAYGROUND How many total teams currently play in the NFL? 6. Category – LAB RATS True or False: The Strange Australian animal known as the platypus is technically a bird. 7. Category – THE PLAYGROUND What decade was the first official NFL Super Bowl played in? 8. Category – CHILD’S PLAY During what real-life American war was the comic book character, Captain America, created? 9. Category – Brainiac What ancient empire do movies like “Gladiator,” “Spartacus” and “Ben-Hur” all depict?

ROUND 6 - BRAIN FREEZE CHALLENGE! Brain Freeze Challenge Directions: Casting Couch In 2008, the American Film Institute (AFI) made a long list of its top movies in 10 different categories. Please name the #1 movie in each category, given key words and actors. Good luck!