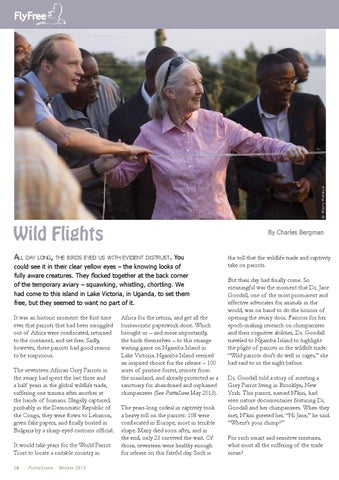 day long, the birds eyed us with evident distrust.

You could see it in their clear yellow eyes – the knowing looks of fully aware creatures. They flocked together at the back corner of the temporary aviary – squawking, whistling, chortling. We had come to this island in Lake Victoria, in Uganda, to set them free, but they seemed to want no part of it. It was an historic moment: the first time ever that parrots that had been smuggled out of Africa were confiscated, returned to the continent, and set free. Sadly, however, these parrots had good reason to be suspicious. The seventeen African Grey Parrots in the aviary had spent the last three and a half years in the global wildlife trade, suffering one trauma after another at the hands of humans. Illegally captured, probably in the Democratic Republic of the Congo, they were flown to Lebanon, given fake papers, and finally busted in Bulgaria by a sharp-eyed customs official. It would take years for the World Parrot Trust to locate a suitable country in 10

Africa for the return, and get all the bureaucratic paperwork done. Which brought us – and more importantly, the birds themselves – to this strange waiting game on Ngamba Island in Lake Victoria. Ngamba Island seemed an inspired choice for the release – 100 acres of pristine forest, remote from the mainland, and already protected as a sanctuary for abandoned and orphaned chimpanzees (See PsittaScene May 2013). The years-long ordeal in captivity took a heavy toll on the parrots: 108 were confiscated in Europe, most in terrible shape. Many died soon after, and in the end, only 23 survived the wait. Of those, seventeen were healthy enough for release on this fateful day. Such is

the toll that the wildlife trade and captivity take on parrots. But their day had finally come. So meaningful was the moment that Dr. Jane Goodall, one of the most prominent and effective advocates for animals in the world, was on hand to do the honors of opening the aviary door. Famous for her epoch-making research on chimpanzees and their cognitive abilities, Dr. Goodall traveled to Ngamba Island to highlight the plight of parrots in the wildlife trade. “Wild parrots don’t do well in cages,” she had said to us the night before. Dr. Goodall told a story of meeting a Grey Parrot living in Brooklyn, New York. This parrot, named N’kisi, had seen nature documentaries featuring Dr. Goodall and her chimpanzees. When they met, N’kisi greeted her. “Hi Jane,” he said. “Where’s your chimp?” For such smart and sensitive creatures, what must all the suffering of the trade mean?

It was a moving moment to pull the string that opened the door of their acclimatization aviary. The 17 parrots have adapted to their freedom amazingly well. It is, indeed, a pathetically tiny number when one considers the hundreds from the wild, but it symbolizes the huge efforts being made to curb the

illegal trade and return the birds to their rightful habitat.

of thousands that have been stolen

But the parrots had their own ideas. If they were talking amongst themselves, I’m pretty sure what they were talking about was us. “We know you’re out there,” they seemed to say, “and we’re not coming out.” The hours dragged on. The press left. The dignitaries left. Dr. Goodall left to catch a flight. Finally, Rowan Martin, my student Nev Granum, and I took a break for dinner. After dinner, with the red African sun sliding into Lake Victoria, we went back to the aviary.

Dr. Goodall draws a crowd. A small army of African journalists, from television and print, made the early morning trip to the island for the release. Perhaps they were expecting a dramatic event, a great photo op for the cameras – an open door, a flurry of wings, a sudden rush of grey and red as a flock made its dash for freedom.

(Facing page) Dr. Jane Goodall joins WPT’s Rowan Martin to open the aviary door for 17 African Grey Parrots that, after a long ordeal, made their way home. After much preparation, their release on Ngamba island in Lake Victoria, Uganda, was a rewarding experience for all. (Above) The first birds investigate the open door and soon the open branches near their acclimatization cage where they had gained strenghth for wild flight.

“Look,” Rowan said, “two are out.” An ornithologist with the World Parrot Trust, Rowan supervised the entire release and did a great job for the parrots. Sure enough, two cool grey birds with crimson tails sat on a platform just outside the hatch opening. As we watched, they took off. Wings flapping loudly, they sagged toward the ground. We gasped. One worry about the release was that the birds weren’t strong enough for free flight after three-plus years in cages. Thankfully, they skimmed some

low bushes, lifted above the fence of the compound, and settled into a far tree. By then, we were cheering. That evening we watched five more parrots emerge from the aviary. They spent their first night in years outside a cage. The next day we were at the aviary early for a magical African morning. The sun flashed in peach and pink on the clouds over Lake Victoria and the chimpanzees were hooting and screaming as they ate breakfast. The

parrots were calling too, back and forth between those outside and those inside the cage. Two birds were already in the bare branches nearby and one bird was on the platform outside the aviary. It climbed a branch, tight-roped along the chord used to open the hatch, and flew to the two parrots in the branches. I watched as one small group – four parrots – flew above the canopy of the forest, on shallow wing beats, disappearing as they explored the far side of their new home. It was impossible not to feel your heart soar with the parrots in these first wild flights. After centuries of taking parrots out of the wild, finally we’re doing the right thing – bringing them home. By the end of the morning, all but three parrots were free. I watched as one bird flew up to a bare snag above the chimpanzee compound. The low morning sun warmed its soft grey feathers, flashing on its white face. Its view was the vast panorama of Lake Victoria and the forested island. After so much trauma, what must this view have meant to this parrot? Could it see on the horizon, a new future for parrots in Africa? Such a poignant moment, for us and, more importantly, for the parrot – so smart, so knowing, and then suddenly, so unexpectedly free.

Charles Bergman has had a long interest in parrots. In the early 1990s, he wrote a story for Audubon magazine about his adventures undercover busting parrot smugglers. More recently, he wrote a cover story for Smithsonian magazine on macaw poachers in Latin America, and joined Dr. Gilardi on an expedition to Guyana to discover the last known wild flock of Sun Conures. Freeing Grey Parrots into the African wild has been one of his most satisfying wildlife experiences ever.