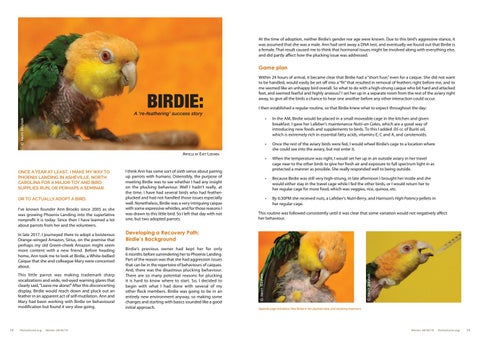 At the time of adoption, neither Birdie’s gender nor age were known. Due to this bird’s aggressive stance, it was assumed that she was a male. Ann had sent away a DNA test, and eventually we found out that Birdie is a female. That result caused me to think that hormonal issues might be involved along with everything else, and did partly affect how the plucking issue was addressed.

I then established a regular routine, so that Birdie knew what to expect throughout the day:

Within 24 hours of arrival, it became clear that Birdie had a “short fuse,” even for a caique. She did not want to be handled, would easily be set off into a “fit” that resulted in removal of feathers right before me, and to me seemed like an unhappy bird overall. So what to do with a high-strung caique who bit hard and attacked feet, and seemed fearful and highly anxious? I set her up in a separate room from the rest of the aviary right away, to give all the birds a chance to hear one another before any other interaction could occur.

I’ve known founder Ann Brooks since 2005 as she was growing Phoenix Landing into the superlative nonprofit it is today. Since then I have learned a lot about parrots from her and the volunteers. In late 2017, I journeyed there to adopt a boisterous Orange-winged Amazon, Sirius, on the premise that perhaps my old Green-cheek Amazon might seem more content with a new friend. Before heading home, Ann took me to look at Birdie, a White-bellied Caique that she and colleague Mary were concerned about. This little parrot was making trademark sharp vocalizations and wide, red-eyed warning glares that clearly said, “Leave me alone!” After this disconcerting display, Birdie would reach down and pluck out an feather in an apparent act of self-mutilation. Ann and Mary had been working with Birdie on behavioural modification but found it very slow going.

Once the rest of the aviary birds were fed, I would wheel Birdie’s cage to a location where she could see into the aviary, but not enter it.

When the temperature was right, I would set her up in an outside aviary in her travel cage near to the other birds to give her fresh air and exposure to full spectrum light in as protected a manner as possible. She really responded well to being outside.

Because Birdie was still very high-strung, in late afternoon I brought her inside and she would either stay in the travel cage while I fed the other birds, or I would return her to her regular cage for more food, which was veggies, rice, quinoa, etc.

By 6:30PM she received nuts, a Lafeber’s Nutri-Berry, and Harrison’s High Potency pellets in her regular cage.

This routine was followed consistently until it was clear that some variation would not negatively affect her behaviour.

Developing a Recovery Path: Birdie’s Background Birdie’s previous owner had kept her for only 6 months before surrendering her to Phoenix Landing. Part of the reason was that she had aggression issues that can be in the repertoire of behaviours of caiques. And, there was the disastrous plucking behaviour. There are so many potential reasons for plucking it is hard to know where to start. So, I decided to begin with what I had done with several of my other flock members. Birdie was going to be in an entirely new environment anyway, so making some changes and starting with basics sounded like a good initial approach.

OR TO ACTUALLY ADOPT A BIRD.

I think Ann has some sort of sixth sense about pairing up parrots with humans. Ostensibly, the purpose of meeting Birdie was to see whether I had any insight on the plucking behaviour. Well I hadn’t really, at the time. I have had several birds who had featherplucked and had not handled those issues especially well. Nonetheless, Birdie was a very intriguing caique with some expressive whistles, and for those reasons I was drawn to this little bird. So I left that day with not one, but two adopted parrots.

In the AM, Birdie would be placed in a small moveable cage in the kitchen and given breakfast. I gave her Lafeber’s maintenance Nutri-an Cakes, which are a good way of introducing new foods and supplements to birds. To this I added .05 cc of Buriti oil, which is extremely rich in essential fatty acids, vitamins E, C and A, and carotenoids.

ONCE A YEAR AT LEAST, I MAKE MY WAY TO PHOENIX LANDING IN ASHEVILLE, NORTH CAROLINA FOR A MAJOR TOY AND BIRD SUPPLIES RUN, OR PERHAPS A SEMINAR.

Opposite page and above: Wee Birdie in her plucked state, and receiving treatment

Medical Protocols Birdie had plucked a lot of her chest and thighs and was beginning to work on her back. Feathers were returning, but she would re-pluck them. A couple of weeks after I brought her home, it became clear to me that having a chest full of incoming blood feathers was probably painful. At that point I contacted my avian vet, Dr. Rhoda Stevenson, DVM Dipl ABVP Avian, whom I regard highly. Dr. Stevenson looked at photos of Birdie’s feather loss, and prescribed .03 cc of Gabapentin and .03 cc of Meloxicam twice a day to provide some relief. She also advised me to give her foods high in Vitamin A. Birdie is a famished caique most of the time, so this was not hard.

Once it was determined that Birdie was female, she was administered a Lupron shot to help calm her naturally occurring hormones. At a subsequent wellness exam I thought that a Deslorilen (also a hormone) implant to deliver ongoing treatment would be merited. Dr. Stevenson agreed.

I think one critical change occurred in Birdie’s recovery. Emily Sprague is a veterinary technician who helps out in the aviary. While there, Emily started communicating with Birdie every time she encountered her. Since then, Birdie has responded extremely positively to Emily.

I realized that in giving Birdie her medications, wrapping her in a relatively stiff towel must also be very irritating. So I started using a soft microfleece baby blanket. No matter if she was in one of her caique fits or in attack mode, it seemed to calm her immediately. My observations of other caiques seem to indicate that they don’t object to a gentle hold in a soft cloth.

In a later exchange with Ann, I learned that setbacks were common. So I simply continued the routine I had established, along with treating the infection.

Husbandry Issues and a Breakthrough

Now, Birdie starts whistling and chattering the second Emily is in the aviary and loves to hang out with her. Birdie is still absolutely fine with me, has a good relationship with another caretaker, and is not focused hormonally on any one of us—any such behaviour is immediately discouraged. She likes recognition and interaction with her three humans.

As it turned out, no one thing caused her problems, it was multiple issues: hormones, stress, diet, and a lack of interaction and play with caregivers or other birds. Now I rarely regard plucking or self-mutilation as a one-factor issue; instead, I look at every possibility. My takeaways from this re-featheration tale? 1. Don’t give up. 2. There is usually more than one factor involved. 3. It takes time. It took time for the problem to develop and it will take time to resolve it. 4. Use good veterinary folk (and other insightful people) to tackle both medical and behavioural issues. The project to re-feather Birdie and reduce her negative behaviours took months. Looking back on her life I now realize that she was, in a way, unwell from all of her woes. But by June of 2018, after a lot of persistence, I was able to report to Ann that she was no longer on any medications, although I would not hesitate to reinstitute them if needed. Birdie is now a real charmer with her favourite humans. And a fully-feathered, healthy, beautiful little parrot.

Birdie’s feather re-growth was extensive -- chest, legs, and back. With all the re-growth, she needed all the nutrition she could get. So her food bowl was always filled, and she ate all the time. Birdie had a good diet at her prior home – fresh fruit and vegetables, along with a pelleted diet. As time has passed I have learned that she loves to “murder” strawberries and other berries, shaking their innards all over her cage. And sweet potatoes! She will try almost any vegetable and likes all kinds of fruit.

Birdie had one major setback in her recovery in the winter of 2017/2018, when it was too cold for her to sit outside in the outdoor aviary for sun and fresh air. She was now spending time indoors in the aviary room itself, with much greater exposure to the mini-macaws and conures. An exam in March 2018 revealed she had developed an E. coli infection.

Eventually, the call-and-response to Birdie’s vocalizations resulted in her stepping up for Emily. That led to games of “peekaboo” and other funny antics. For example, Birdie loves to be on the floor and seems to think that if she is on the floor, it belongs to her. She gets to chase, jump on and try to bite people’s feet. When Birdie jumps on Emily, they play a game of carnival ride, where Emily slowly swings her foot back and forth with Birdie in tow. This distraction takes Birdie’s focus off of a negative behaviour and re-directs it to play.

Evet Loewen, JD is an attorney who practised municipal law for 30 years with the City of San Jose, California. Her legal experience there included a wide range of legal issues, including environmental law. A lifetime member of the World Parrot Trust since 2005, in 2011 she became a volunteer legal advisor. In caring for her flock of parrots for the past two decades, Evet has incorporated treatment and dietary regimens learned from experts in the field, principally behaviourists, scientists, wildlife biologists, and avian veterinarians. While Evet doesn’t represent herself as an expert in any of these areas, she believes that the expertise of others has contributed greatly to the health and longevity of her companion parrots.

Top: Birdie, a contented and fully feathered bird Below: With her good friend Emily