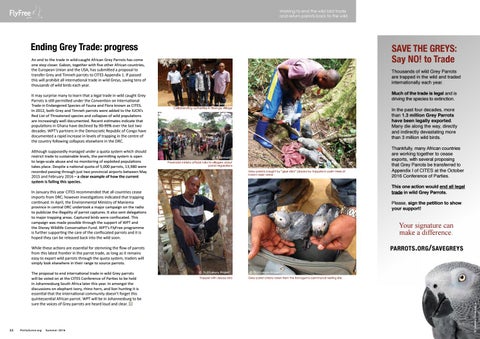 Save the Greys: Say NO! to Trade

An end to the trade in wild-caught African Grey Parrots has come one step closer. Gabon, together with five other African countries, the European Union and the USA, has submitted a proposal to transfer Grey and Timneh parrots to CITES Appendix 1. If passed this will prohibit all international trade in wild Greys, saving tens of thousands of wild birds each year.

Although supposedly managed under a quota system which should restrict trade to sustainable levels, the permitting system is open to large-scale abuse and no monitoring of exploited populations takes place. Despite a national quota of 5,000 parrots, 13,980 were recorded passing through just two provincial airports between May 2015 and February 2016 – a clear example of how the current system is failing this species.

Much of the trade is legal and is driving the species to extinction.

In the past four decades, more than 1.3 million Grey Parrots have been legally exported. Many die along the way, directly and indirectly devastating more than 3 million wild birds.

This one action would end all legal trade in wild Grey Parrots.

In January this year CITES recommended that all countries cease imports from DRC; however investigations indicated that trapping continued. In April, the Environmental Ministry of Maniema province in central DRC undertook a major campaign on the radio to publicize the illegality of parrot captures. It also sent delegations to major trapping areas. Captured birds were confiscated. This campaign was made possible through the support of WPT and the Disney Wildlife Conservation Fund. WPT’s FlyFree programme is further supporting the care of the confiscated parrots and it is hoped they can be released back into the wild soon.

Your signature can make a difference. parrots . org / savegreys

While these actions are essential for stemming the flow of parrots from this latest frontier in the parrot trade, as long as it remains easy to export wild parrots through the quota system, traders will simply look elsewhere in their range to source parrots. The proposal to end international trade in wild Grey parrots will be voted on at the CITES Conference of Parties to be held in Johannesburg South Africa later this year. In amongst the discussions on elephant ivory, rhino horn, and lion hunting it is essential that the international community doesn’t forget this quintessential African parrot. WPT will be in Johannesburg to be sure the voices of Grey parrots are heard loud and clear.

Thankfully, many African countries are working together to cease exports, with several proposing that Grey Parrots be transferred to Appendix I of CITES at the October 2016 Conference of Parties.

It may surprise many to learn that a legal trade in wild caught Grey Parrots is still permitted under the Convention on International Trade in Endangered Species of Fauna and Flora known as CITES. In 2012, both Grey and Timneh parrots were added to the IUCN’s Red List of Threatened species and collapses of wild populations are increasingly well documented. Recent estimates indicate that populations in Ghana have declined by 90-99% over the last two decades. WPT’s partners in the Democratic Republic of Congo have documented a rapid increase in levels of trapping in the centre of the country following collapses elsewhere in the DRC.

Thousands of wild Grey Parrots are trapped in the wild and traded internationally each year.