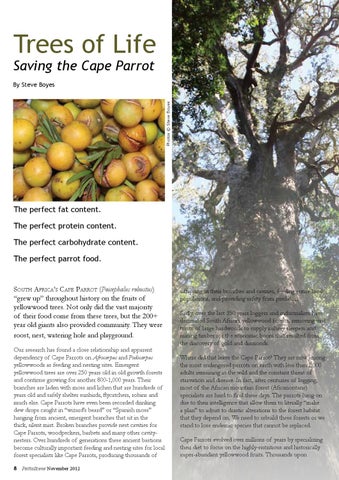 South Africa’s Cape Parrot (Poicephalus robustus) “grew up” throughout history on the fruits of yellowwood trees. Not only did the vast majority of their food come from these trees, but the 200+ year old giants also provided community. They were roost, nest, watering hole and playground. Our research has found a close relationship and apparent dependency of Cape Parrots on Afrocarpus and Podocarpus yellowwoods as feeding and nesting sites. Emergent yellowwood trees are over 250 years old in old growth forests and continue growing for another 800-1,000 years. Their branches are laden with moss and lichen that are hundreds of years old and safely shelter sunbirds, flycatchers, robins and much else. Cape Parrots have even been recorded drinking dew drops caught in “wizard’s beard” or “Spanish moss” hanging from ancient, emergent branches that sit in the thick, silent mist. Broken branches provide nest cavities for Cape Parrots, woodpeckers, barbets and many other cavitynesters. Over hundreds of generations these ancient bastions become culturally important feeding and nesting sites for local forest specialists like Cape Parrots, producing thousands of 8   PsittaScene November 2012

offspring in their branches and cavities, feeding entire local populations, and providing safety from predators. Sadly, over the last 350 years loggers and industrialists have decimated South Africa’s yellowwood forests, removing vast tracts of large hardwoods to supply railway sleepers and mining timber for the economic boom that resulted from the discovery of gold and diamonds. Where did that leave the Cape Parrot? They are now among the most endangered parrots on earth with less than 1,000 adults remaining in the wild and the constant threat of starvation and disease. In fact, after centuries of logging, most of the African mountain forest (Afromontane) specialists are hard to find these days. The parrots hang on due to their intelligence that allow them to literally “make a plan” to adjust to drastic alterations to the forest habitat that they depend on. We need to rebuild these forests or we stand to lose endemic species that cannot be replaced. Cape Parrots evolved over millions of years by specializing their diet to focus on the highly-nutritious and historically super-abundant yellowwood fruits. Thousands upon

thousands of Cape Parrots frequented these ancient forests, busying themselves like honeybees, moving from feeding patch to feeding patch, dispersing thousands of yellowwood fruits to the ground to kickstart the next generation of forest giants. The fate of these charismatic parrots was linked over thousands of years of mutual benefit to these grand forests. Or was it? Our research indicates that the destruction of South Africa’s yellowwood forests was so catastrophic, so immediate, that the Cape Parrots that associate with these same forests today behave more like an introduced species, investigating new food items that they have not encountered as a species before and struggling to find a new, sustainable way of life in a significantly different landscape.

(left) A 1,000 year old yellowwood tree now stands alone. There are only three yellowwoods this size left on earth.

From the moment we discovered Cape Parrots are these trees we’ve had a romance with considered one of the most intelligent parrots them and that ended with us chopping in captivity. They are down virtually all the yellowwoods... adapting and have reinvented themselves as opportunistic then that they discovered a new crop generalists feeding on available food in the region, the first commercially resources. It has been our mission productive pecan orchards that started for the last 5 years to determine how providing huge crops from the midbest to help these endangered parrots sustainably persist in their historic range. 1970s. By the early 1970s, the Cape Parrots’ preferred coastal summer feeding grounds had been degraded to the extent that they could not rely on them for seasonal food resources integral to their ecology. This situation marked the end of their daily feeding forays to coastal areas and their increasing reliance on exotic food resources available during the summer months. It was

So began the “Pecan Wars” during which thousands of Cape Parrots were killed by shooting and netting them in the orchards. Conservation authorities stepped in too late, halting the shooting by paying compensation to farmers and buying the actual pecan orchards. Cape Parrots disappeared from these coastal areas in the 1980s and have not been seen since. November 2012 PsittaScene  9

(left) A Cape Parrot feeds on an exotic fruit from south Asia. Food shortage in early summer requires reliance on a variety of non-native foods. (right and below) Community nurseries in local villages supply 100s of yellowwood saplings. Nestboxes bridge the gap until nest trees grow to the desired size.

rate in 48 samples taken from a local population of approximately 275 Cape Parrots. Alarming to say the least! What is causing this outbreak? Our research indicates that their new diet and limited access to food at the end of summer are contributing factors. We are currently looking at the degree to which wild Cape Parrot populations are inbred and whether low genetic variability could contribute to increased susceptibility. Our research has revealed that the strain of PBFD virus attacking the wild population is endemic and has probably been there for a long time. It is our responsibility to restore South Africa’s Afromontane yellowwood forests to their former glory and work everyday to stimulate positive change for wild Cape Parrots.

Nowadays, the remaining Cape Parrots feed on the plums from Japan, pecans from the USA, acorns from England, wattle seeds and eucalyptus flowers from Australia, Chinaberry tree fruits from South Asia (above), and Jacaranda pods from South America – all of which have replaced the yellowwood fruits that they used to rely on for the vast majority of their diet. Today, the parrots do not even waste their time looking for yellowwood trees in fruit, as there are so few female trees left that bear fruit. In fact, they “know” when these groves are ready, which 10   PsittaScene November 2012

happens every 3 years. A hundred years ago there would have been a grove of yellowwoods in fruit somewhere along the mountain range all year round – groves that could provide food for many multiples of the currently existing Cape Parrot populations. Their new diet has too much fat and sugar in it, and comes up short between January and March when there is hardly anything to eat. In drought years, starving, malnourished parrots seem to become more susceptible to Psittacine Beak and Feather Disease (PBFD). In 2011, we discovered an 100% infection

In 2011, we launched the iziKhwenene Project in the Amathole Mountains of South Africa. Our main goals were to plant our first 25,000 indigenous trees and erect 600 artificial nest boxes with local communities to stimulate positive change for the Endangered Cape Parrot and other Afromontane forest specialists. The Cape Parrot Project is the long-term research project that informs all conservation actions (e.g. tree-planting) based upon high-quality empirical research. It is the umbrella project administered by the Percy FitzPatrick Institute that supports the iziKhwenene Project. We are committed to achieving significant population growth and range expansion by South Africa’s national parrot, and hope to reintroduce Cape Parrots to forests where they appear to have gone locally extinct.

• Conduct a “Population and Habitat Viability Assessment” for Cape Parrots; • Initiate an in-depth survey of population numbers and demographics in all remaining Cape Parrot populations by professionals as part of a funded research project using the latest technologies available; • Locate and monitor the breeding biology of Cape Parrots in the wild for comparison with results from breeding trials in captivity using different indigenous food resources – does lack of yellowwood fruits in their diet undermine breeding success?;

• Develop long-term partnerships with 24 villages along the Amathole Mountains establishing them as custodians of the indigenous forests they have heritage rights over and develop pilot community projects in villages near other Afromontane forests used by Cape Parrots. The World Parrot Trust has been a project partner since the launch of the Cape Parrot Project in 2008. Donations to the Trust are an important source of project funding.

Special thanks to: the Hans Hoheisen Charitable Trust, Conservation International’s Critical Ecosystems Partnership Fund, the National Geographic Conservation Trust, Centre of Excellence at the Percy FitzPatrick Institute, the iziKhwenene Cooperative, Percy FitzPatrick Institute (University of Cape Town), the Wild Bird Trust, the Department of Agriculture, Forestry and Fisheries, Rance Timber, the Border Rural Committee, BirdLife Border, the Arminel Mountain Lodge, the University of Fort Hare, and the Hogsback Inn. Steve Boyes is an ornithologist from the University of Cape Town’s Percy FitzPatrick Institute of African Ornithology. He grew up in South Africa and has a passion for African parrots and the forests they depend on. He has dedicated his life to conserving both.

Research and conservation priorities for the immediate future:

• Establish the iZingcuka Research Station as the base for the Cape Parrot Project and iziKhwenene Project; and,

The dire state of affairs for the parrots in many ways mimics that of many in the local villages. We decided to work in partnership with local people to stimulate positive change for their communities as well as for the birds by providing employment and investing them in the future of the forests they effectively own and manage as communal land. Cape Parrots are the perfect ambassador for these threatened African forests – their plants, their animals and their people.