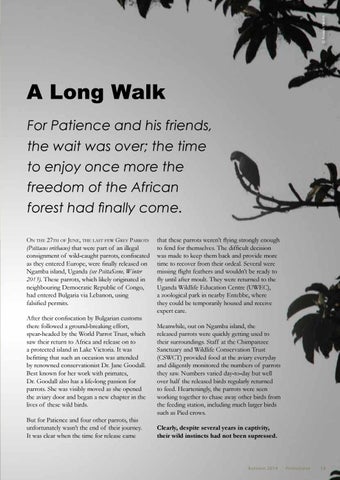 A Long Walk For Patience and his friends, the wait was over; the time to enjoy once more the freedom of the African forest had finally come. On the 27th of June, the last few Grey Parrots (Psittacus erithacus) that were part of an illegal consignment of wild-caught parrots, confiscated as they entered Europe, were finally released on Ngamba island, Uganda (see PsittaScene, Winter 2013). These parrots, which likely originated in neighbouring Democratic Republic of Congo, had entered Bulgaria via Lebanon, using falsified permits.

After their confiscation by Bulgarian customs there followed a ground-breaking effort, spear-headed by the World Parrot Trust, which saw their return to Africa and release on to a protected island in Lake Victoria. It was befitting that such an occasion was attended by renowned conservationist Dr. Jane Goodall. Best known for her work with primates, Dr. Goodall also has a life-long passion for parrots. She was visibly moved as she opened the aviary door and began a new chapter in the lives of these wild birds. But for Patience and four other parrots, this unfortunately wasn’t the end of their journey. It was clear when the time for release came

that these parrots weren’t flying strongly enough to fend for themselves. The difficult decision was made to keep them back and provide more time to recover from their ordeal. Several were missing flight feathers and wouldn’t be ready to fly until after moult. They were returned to the Uganda Wildlife Education Centre (UWEC), a zoological park in nearby Entebbe, where they could be temporarily housed and receive expert care. Meanwhile, out on Ngamba island, the released parrots were quickly getting used to their surroundings. Staff at the Chimpanzee Sanctuary and Wildlife Conservation Trust (CSWCT) provided food at the aviary everyday and diligently monitored the numbers of parrots they saw. Numbers varied day-to-day but well over half the released birds regularly returned to feed. Hearteningly, the parrots were seen working together to chase away other birds from the feeding station, including much larger birds such as Pied crows. Clearly, despite several years in captivity, their wild instincts had not been supressed.

Patience, rewarded... By late September, Patience and the other birds had been moved back to Ngamba island and were getting used to their lush surroundings. Encircled by green vegetation and a cacophony of wild sounds, it’s hard not to imagine their spirits lifted. The whistles of their former cage-mates now flying free no doubt buoyed them up. With more space to fly they now had a chance to build the flight muscles they would need for soaring above the canopy. Although the released birds had begun to visit less frequently, staff at Ngamba observed them coming to “greet” those in the aviary every morning, perching on nearby trees. By now the released birds were regularly seen mixing and flying with a small group of wild birds and flying across the water to nearby and larger islands. All great indications of their long-term survival.

Patience and his friends, prior to their long-awaited release back to the wild.

In the aviary the birds continued to improve their fitness, getting stronger and stronger. But, one morning disaster struck; one of the parrots had disappeared. Some detective work revealed that a water monitor lizard, presumably one of the impressive giants that live along the lake shore, had burrowed its way into the aviary. From the tracks in the earth the Ngamba staff deduced that the lizard had grabbed an unsuspecting parrot before returning to its burrow. This is just one of the challenges of working in a wildlife sanctuary teeming with life and we counted ourselves lucky that the outcome had not been worse. Finally, the day came for the surviving parrots to be returned to the wild. The aviary door was opened at daybreak and by the afternoon the whistles from the free-flying birds had enticed them out. Indeed it had been a long, long walk to freedom but for Patience and his friends it was no doubt worth the wait. This ground-breaking project was the result of hard work by numerous individuals and organisations committed to returning these parrots to the wild. The World Parrot Trust would like to extend its deep–felt gratitude to all those involved. In Uganda the CSWCT (Chimpanzee Sanctuary and Wildlife Conservation Trust), UWEC (Uganda Wildlife Education Centre), JGI Uganda (Jane Goodall Institute Uganda) and UWA (Uganda Wildlife Authority) deserve recognition for their pivotal contributions. The Bulgarian Biodiversity Foundation and Bulgarian Ministry of Environment and Water were instrumental in their help. Article © Dr. Rowan Martin, Manager of the World Parrot Trust Africa Conservation Programme. www.parrots.org/africa

Above, basking in the rays of newfound freedom. Below, the watchful sentry keeps a wary eye out for danger as the last of the surviving parrots finally attain their freedom, and rejoin their wild flock.