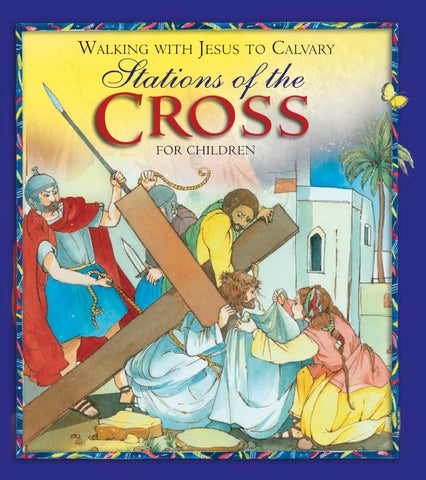 What Are the Stations of the Cross?

Have you ever taken a train journey? If so, you know that it makes stops at stations along the way. That’s where people can get on and off. Jesus made a journey from the city of Jerusalem to the hill of Calvary. He carried a heavy cross along the Via Dolorosa, which means “Road of Sadness.” Jesus stopped many times before he reached Calvary, where he was crucified. The stops on Jesus’ journey are now known as the Stations of the Cross—or the Way of the Cross. Do you know how the Stations of the Cross began? The early Christians loved going to Jerusalem to see where Jesus actually carried his cross. This helped them to pray and to feel close to Jesus. But as Christianity spread to other countries, most people could not make the long pilgrimage to Jerusalem. Then someone had the idea of making fourteen plaques or pictures of Jesus and the stops he made. These became very popular. Today on the walls of Catholic churches and chapels all over the world, there are Stations of the Cross. Some churches even have Stations outdoors. Next time you go to your church, take a really good look at the Stations. And perhaps you and your family can plan to make a pilgrimage to a nearby cathedral, monastery, or convent to pray the Stations there!

How to Pray the Stations of theCross

Praying the Stations of the Cross is a great way to talk to Jesus! While many people like to pray the Stations during Lent, you can pray them at any time. You can go to a church, or you can draw your own pictures and put them around your home or even around your backyard. You can also use this book! You can pray the Stations alone or with your family. Or perhaps you can invite a friend to join you on this special journey. Sometimes you may not have time to pray all the Stations, so choose just a few of them. If this is the first time you have made the Stations of the Cross, here is a simple way to get you started using this book. First, read about the night before Jesus died on page 8. Then, turn to the first Station and make the Sign of the Cross. Look at the picture. What is happening to Jesus? Read the description on the opposite page. Stop for a moment and talk to Jesus in your own words. Finish the first Station with the prayer. Then turn the page to the next Station. Perhaps you can sing a verse from a favorite hymn as you begin each Station. Other prayers are included at the end of this book.

The Fourteen Stations of theCross 

The Night Before Jesus Died

Jesus loves you so much! He is your Savior, King, and friend. That’s why he became man over two thousand years ago. While he was on earth, he healed many people—including those who were sick, blind, deaf, unable to walk, or with leprosy. Twice he fed large crowds of hungry people. Jesus taught people how to pray and how to live in a way that would be pleasing to their heavenly Father. He loved children and wanted them to come to him. But not everyone liked Jesus. He had enemies who wanted to kill him. Jesus knew he was going to die, so after his Last Supper with his disciples, he went to the Garden of Gethsemane. There, on his knees, he prayed, “Father, take this cup from me, but not my will, but yours be done.” He prayed so hard that he sweated drops of blood. Suddenly, soldiers entered the garden. Judas Iscariot, one of Jesus’ disciples, was with them. He had betrayed Jesus for the price of thirty pieces of silver. Judas came up and kissed Jesus. That was the sign—now the soldiers knew who Jesus was! The other disciples ran away, and the soldiers took Jesus to Pilate, the Roman governor. 8

Jesus Is Condemned to Death

It was early on Friday morning when Jesus stood silently in front of Pontus Pilate, his wrists bound together with ropes. Pilate looked at Jesus. He knew Jesus was not guilty of any crime, and he didn’t want to crucify him. He didn’t know what to do. Then he had an idea. Pilate came out on the balcony of his palace and said to the crowd, “Today is a special day when I can release a criminal. Who do you want me to release—Jesus, or Barabbas, the murderer?” Pilate hoped they would choose Jesus. But instead the people answered, “Barabbas!” Pilate answered, “Then what shall I do with Jesus?” They shouted, “Crucify him!” Pilate was shocked. He asked his servant to bring him a bowl of water. In front of the crowd, Pilate washed his hands. This showed that he didn’t want to be part of the decision to condemn Jesus to death. Then he sent Jesus away to be whipped and crucified. Jesus, sometimes I do things that are wrong just because I want to please my friends. I want to do things only to please you. Help me to make good choices.

Jesus was led into the courtyard of Pilate’s palace. Soldiers took off his cloak and tunic and tied him to a pillar. Then they took turns striking Jesus with strips of leather tied to pieces of broken bone. Jesus was in horrible pain as the whip cut into his body. Some soldiers wanted to make fun of Jesus so they dressed him up like a king! They put a purple cloak on him. One soldier said, “A king needs a crown.” They made one from large twisted thorns. They pushed the crown into his head. Another soldier said, “A king needs a royal scepter.” So they got a stick and put it in Jesus’ right hand. Other soldiers laughed and said, “Hail, King of the Jews.” “It is time to get this man’s cross,” said a soldier. Two other soldiers dragged it over to Jesus. They placed it in his hands and over his shoulders. As he took the cross, Jesus began to bend over. The cross was so heavy, and he was so weak! Jesus, I love you. Thank you for accepting the cross. Whenever I look at a crucifix, I want to remember how much you love me.

Jesus was led out of Pilate’s courtyard, dragging his cross through the narrow, winding streets of Jerusalem. It was about one-third of a mile to Calvary. This was the hill outside the city walls where criminals were nailed to their crosses. The midmorning air was hot and humid. A crowd of people followed. The rough wood of the cross cut into Jesus’ flesh. Sometimes the cross banged against the crown of thorns on Jesus’ head. Suddenly, Jesus lost his balance and fell down. The cross landed on top of him. Some people in the crowd cried out, “Oh, no!” Others began to laugh at him. Jesus stayed on the ground, unable to move. The soldiers were annoyed. They picked up the cross and quickly pulled Jesus to his feet. They wanted their job of taking Jesus to Calvary to be over. Lots of bad language poured out of their mouths. Then Jesus took his cross and began walking again. Jesus, how tired you must have been, and how much your body must have hurt! But you didn’t complain. Sometimes I complain to my family or friends when they annoy me or when I’m unhappy about something. Holy Spirit, when this happens, please remind me to ask for your help. 15

Jerusalem was filled with people. Some had come there for the Passover feast. Others had come to join the procession to Calvary. Jesus walked along slowly with his heavy cross over his shoulders. In the crowds that followed him was one very special person—Jesus’ mother, Mary! Mary came up to Jesus and reached out her hand to touch him. “My son, I am here with you. I won’t leave you alone,” she whispered. Jesus’ head was down because of the weight of the cross, but he recognized his mother’s voice. Jesus stopped walking and looked up at his Mother. Mary was shocked to see Jesus’ face. It was covered with blood and bruises. She felt a stab of pain in her heart. Then she remembered the words of Simeon the prophet when she and Joseph had presented the baby Jesus in the Temple in Jerusalem. Simeon had said to her, “A sword will pierce your heart.” Mary heard one of the soldiers call out to her, “Move back.” Another said to Jesus, “Keep walking.” Some of Mary’s friends comforted her as she left Jesus’ side. One of them said, “Mary, we will stay close to you and Jesus.” Mary, I love you. You are my Mother in heaven. Pray for me. Be with me, just as you were with Jesus.

The Word Among Us

A beautiful introduction to the Stations of the Cross, this book that will help children understand what really happened on Calvary and just...

A beautiful introduction to the Stations of the Cross, this book that will help children understand what really happened on Calvary and just...