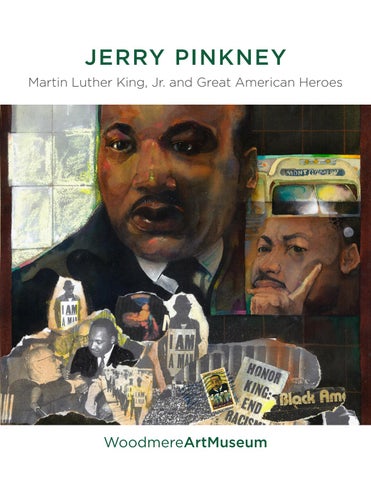 FOREWORD This intimate exhibition of work by Jerry

journeys to freedom in our Stairwell

Pinkney commemorates the life and

Gallery, as we prepare for a larger, more

legacy of Dr. Martin Luther King Jr. on the

detailed exhibition on this theme in 2019.

fiftieth anniversary of his assassination

Woodmere places the highest value on

our collaboration with Jerry Pinkney, and

moved us closer to an ideal of equality

we look forward to being an ongoing

and freedom, even as the tragedy of his

platform for his voice as an artist in

death reminds us of the extreme sacrifice

Philadelphia, the city where he was born

and violence of racial conflict that remain

part of the American journey.

Pinkney for sharing her husband’s time

In his books, Pinkney depicts not only Dr.

and for taking part in the evolution of our

King himself, but also other characters

who experience beauty and hardship

thanks to Hildy Tow, our Robert J. McNeil

on the path to self-determination and

Jr. Curator of Education, for her work in

independence. Among his earliest major

developing the exhibition and its related

projects, the artist illustrated the eminent

programming. Woodmere is indebted to

the power and talent of our staff, who

article “Escape from Slavery: The

partner so effortlessly in implementing

the activities that make an exhibition a

in the July 1984 issue of National

reality. Thank you, everyone.

Geographic. This milestone work of scholarship and collaboration with visual

of the historic journey of people away

from enslavement. Woodmere is pleased to present this compact selection of Pinkney’s work about this and other

Underground Railroad, 1984, Published in National Geographic, by Jerry Pinkney (Courtesy of the artist) 3

Pinkney grew up in Germantown and

master watercolorist and one of the most

studied at the Philadelphia College of

Art (now the University of the Arts). He

He has built a career creating paintings

has illustrated more than one hundred

about legendary people and characters

books and received a Caldecott Medal

whose lives exemplify a journey of moral

for The Lion and the Mouse. He was

character and freedom of spirit. This

honored with the Society of Illustrators

exhibition commemorates the legacy of

Lifetime Achievement Award and, in

anniversary of his assassination.

he was inducted into the American

As the artist explains, “For some fifty years, I’ve focused my artistic practice on illustrating the African American legacy, its triumphs and challenges. This grouping of nine paintings, in particular, speaks to spirited, proud people of color and their resistance to oppression and injustice. These works portray the heroic souls that sought light in a time of darkness through individual and collective acts of courage. They also remind us to remain vigilant in standing up for social justice and equity for all.”

Academy of Arts and Sciences in 2012. He has received the Laura Ingalls Wilder Award for making “a substantial and lasting contribution to literature for children” and the Coretta Scott KingVirginia Hamilton Award for Lifetime Achievement, which recognizes authors who “explore cultural and ethnic identity” with “insight, skill, and distinctive style.” His work is represented in the Library of Congress, the New York Public Library, the Delaware Art Museum, the Brandywine River Art Museum, the Philadelphia Museum of Art, the Eric

This exhibition offers a preview of a

larger, thematic presentation of the

the National Museum of Wildlife Art, as

artist’s work that Woodmere is planning

well as in private collections.

This work was initially intended for a

in those archives, an unquenchable thirst

promotional calendar celebrating black history commissioned by the Seagram significant figures for the calendar led him to New York’s Schomburg Center for Research in Black Culture, where he found one of the world’s most extensive collections of materials on African American, African diaspora, and African experiences. He explains, “I discovered, for knowledge. I became a student of American history.” This portrait was not included in the Seagram calendar. The artist rediscovered the work while searching through paintings for this exhibition and reworked it, adding the collage elements.

Pinkney also created this work for the

Freedom, it was also unpublished, having

Published by the Philadelphia Daily News

Seagram Company calendar project. Like Martin Luther King: Standing Up for been rejected by the company, who felt that the subject of the black church should not be included in the calendar. They eventually included an alternate image of the founders of black churches. This painting was later published by the Philadelphia Daily News to accompany an

Mary McLeod Bethune was an educator

Mary McLeod Bethune: The First Lady of the Struggle 1977 Pencil and watercolor on Arches watercolor paper

lives of African Americans through

Administration in the Franklin Roosevelt

and advocate for educational equality. She devoted her life to improving the education, and political and economic empowerment. She founded BethuneCookman College in Daytona Beach, Florida, served as president of the National Council of Negro Women, and was director of the Division of Negro Affairs of the National Youth administration.

Pinkney created this work for a childrenâ&amp;#x20AC;&amp;#x2122;s book by Eloise Greenfield about the life of McLeod Bethune. This illustration of her standing with her students is the cover image.

This Is My Chance to Run Away 1996 Pencil, watercolor, and collage on Arches watercolor paper From Minty: A Story of Young Harriet Tubman Courtesy of the artist

This and This Is My Chance to Run Away

Moses of Her People 1996 Pencil, watercolor, and collage on Arches watercolor paper

written by Alan Schroeder. The book

From Minty: A Story of Young Harriet Tubman

subsequently made more than nineteen

trips back to the South to rescue more

are illustrations for Minty: A Story of Young Harriet Tubman, a children’s book is a fictionalized account of Tubman’s childhood on a Maryland plantation. Born Araminta (Minty for short) Ross, Tubman later changed her first name to Harriet, after her mother. She was born into slavery in 1822, but escaped and

than three hundred enslaved people through the Underground Railroad. She was affectionately known in the North and South as “Moses,” because, like Moses, she helped guide her people to freedom. She was also a Civil War nurse, and a cook and scout for the Union Army. Later in her life she educated former enslaved people and was active in the fight for women’s suffrage. While researching at the Schomburg Center for Research in Black Culture in the 1970s, Pinkney came across an 1869 biography of Tubman, Harriet Tubman: The Moses of Her People, by Sarah Bradford. His illustrations depict the courageous young girl who grew up to become a civil rights hero and one of the most inspiring figures in American history.

“How I Got Over,” Rosa Parks, Martin Luther King, Rev. Ralph Abernathy 1980s Pencil and watercolor on Arches watercolor paper Courtesy of the artist

Story, by Parks with James Haskins.

symbolizing her courageous refusal to

for Freedom for a poster advertising the children’s book Rosa Parks: My Pinkney wanted to tell as much of Parks’s story as he could in a single image. He based her likeness on a photographic portrait from around 1955. He included a group of protestors holding signs, and in the reflection of her face is a bus, give up her seat to a white passenger on a Montgomery, Alabama bus, on December 1, 1955. Parks is widely recognized as the “mother” of the civil rights movement. Her refusal to surrender her seat triggered the Montgomery Bus Boycott and sparked civil rights activism throughout the country.

a mechanical drill. Ballads about him

Henry worked on the railroads, swinging his hammers harder and faster than began circulating in the 1870s, and some historians believe he is based on an actual person. This illustration was created for the book John Henry, written by Julius Lester. In Jerry [Pinkney] and asked him what he

saw in John Henry. Jerry responded by talking about the transcendent quality of John Henry’s humanity. As he talked, the image of Martin Luther King Jr. came to me and it was then I knew I wanted to do the book. . . . I’m still not certain what the connection is between John Henry and King. However, I suspect it is the connection all of us feel to both figures— namely, to have the courage to hammer until our hearts break and to leave our mourners smiling in their tears.”

WORKS IN THE EXHIBITION All works are by Jerry Pinkney (American, born 1939) and are on loan courtesy of the artist.

This Is My Chance to Run Away, from Minty: A Story of Young Harriet Tubman, 1996

Woodmere Art Museum receives state arts funding support through a grant from the Pennsylvania Council on the Arts, a state agency funded by the Commonwealth of Pennsylvania and the National Endowment for the Arts, a federal agency.

ÂŠ 2018 Woodmere Art Museum. All rights reserved. No part of this publication may be reproduced or transmitted in any form or by any means without written permission of the publisher. Photography by Rick Echelmeyer unless otherwise noted.

Support provided in part by The Philadelphia Cultural Fund.

Front cover: Martin Luther King: Standing Up for Freedom, 1974-2017, by Jerry Pinkney (Courtesy of the artist)

Jerry Pinkney (born 1939) is a master watercolorist and one of the most beloved artists in children’s literature. He has built a career creating paintings about legendary people and characters whose lives exemplify a journey of moral character and freedom of spirit. This intimate exhibition includes a recent portrait of Dr. Martin Luther King, Jr. and one of Pinkney’s famous paintings for a 1996 National Geographic article on the Underground Railroad by Charles Blockson, founder and curator emeritus of the Charles L. Blockson Afro-American Collection, Temple University Libraries. This exhibition offers a snapshot of a larger, thematic exhibition Woodmere is planning for 2019. 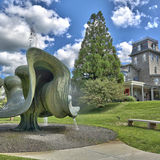