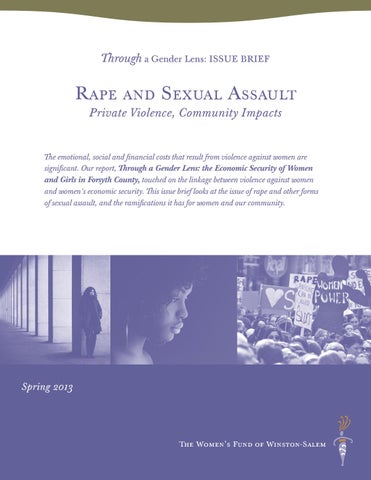 Through a Gender Lens: ISSUE BRIEF

The emotional, social and financial costs that result from violence against women are significant. Our report, Through a Gender Lens: the Economic Security of Women and Girls in Forsyth County, touched on the linkage between violence against women and womenâ&amp;#x20AC;&amp;#x2122;s economic security. This issue brief looks at the issue of rape and other forms of sexual assault, and the ramifications it has for women and our community.

the impact of sexual assault defining the Issue “Sexual assault can be defined as any type of sexual contact or behavior that occurs by force or without consent of the recipient of the unwanted sexual activity. Falling under the definition of sexual assault is sexual activity such as forced sexual intercourse, forcible sodomy, child molestation, incest, fondling, and attempted rape.” — u.s. department of justice-office on violence against women The legal definitions of what constitutes a sexual offense vary from state to state. In North Carolina, the definition of “First Degree Rape” includes that the perpetrator must engage in vaginal intercourse by force and against the will of the victim. The definition of “Sexual Offense” includes that the perpetrator commit a sexual act by force, against the victim’s will, and involving either the use of a weapon or inflicting serious bodily injury. For many victims, these definitions do not encompass the violations and assaults they experience, nor do they account for the spiritual and emotional trauma that many describe as a more devastating loss.

The experience of rape has intense, devastating, and long-lasting effects on the survivor. In addition to physical injury she may have sustained during the assault, victims experience trauma, confusion, anger, anxiety, depression, distress, shame, and fear that can manifest in many ways throughout her lifetime. While the media and our culture often portray “the rapist” as a stranger in the night, 78% of victims of sexual assault are violated by someone they know and have a relationship with prior to the assault, such as a family member, intimate partner, friend or acquaintance.1 For many survivors, this ultimate betrayal of personal trust has long-lasting impacts on their ability to form and maintain personal relationships. “The memory of it never leaves you,” said one victim. “You can think you have made sense of it and moved on, but then something happens, and it’s back. Sometimes I look at my beautiful daughter and how proud and strong she is, and I think I never want this to happen to her.”

The emotional scars of sexual assault have long-lasting impacts on both a woman’s personal relationships and economic well-being. A number of studies have cited the value of this loss as second only to that of murder. The dollar costs to the victim includes not only medical expenses related to the trauma, mental health care, loss of productivity at school and work, legal fees and expenses, but also the intangible costs of the long term loss of quality of life, quantified in legal terms as “pain and suffering.” The costs to society include police and criminal justice system expenses, loss of productivity and wages both from women’s participation in the labor force as well as their economic contributions in their domestic sphere, lost tax revenues, victim compensation, and treatment and prevention programs.

the cost of rape/sexual assault

Total Cost of Each Rape/Sexual Assault:

someone in the U.S.3 is sexually assaulted.

1 IN 5 WOMEN in North Carolina will be the victim of a sexual assault in her lifetime.5

In 2012, there were 346 sexual assaults reported in Forsyth County, including

Estimates are that only

5 lead to a felony conviction. 3 rapists will spend even a single day in prison. The other 97 walk free.10 9

of rapes 11 are reported

Sexual assault is one of the most underreported crimes. Reasons victims give for not reporting the crime include: fear of the perpetrator; self-blame or guilt; shame, embarrassment, or desire to keep the assault a private matter; fear of not being believed or of being accused of playing a role in the crime; lack of trust in the criminal justice system; and fear of deportation (for immigrant women without proper documentation).

Sexual assault can impact anyone including men and boys. However, girls and young women are particularly vulnerable and disproportionally impacted. Age at the Time of First Rape Victimization

Local data also reflects this disparity. Of the 346 sexual assaults reported in Forsyth County in 2012, 81% of the victims were age 25 or younger (88% of these victims were female).

of female students in Winston-Salem/Forsyth County High Schools report being physically forced to have intercourse.13

Fewer than 5% of attempted and completed rapes of college women are reported to law enforcement officials, which means that we have approximately 160 or more sexual assaults among local college students each year.15 The emotional trauma associated with sexual assault can impact a studentâ&amp;#x20AC;&amp;#x2122;s classwork, grades and may even lead to dropping out of school, which impacts her economic security.

sexual assault in forsyth county History For decades, numerous people in Forsyth County have worked to help identify women and children who have been harmed as a result of experiencing a violent act, particularly sexual assault. The efforts of these determined advocates have benefited a great number of women and children by exposing these assaults to the conscience of the community and by the creation of a variety of services. The services created have been designed to help prevent the reoccurrence of such experiences, to assist in developing the skills needed to cope with this trauma, and to provide the support needed for persons in these circumstances to transition to safer and healthier environments. Similar to what was developing in many cities around the country, Winston-Salem’s response to sexual assault began in a grassroots manner in 1975 with a telephone rape crisis line answered mostly by volunteers. Over the years, the movement has grown to the services we have today.

Current Services Family Services provides a number of services for survivors including crisis intervention, advocates to assist during hospital exams and through the legal and court processes, and support and information services. In 2010-2011, Family Services provided these services to 373 sexual assault survivors.16 Sexual Assault Nurse Examiners are available in the Emergency Departments of both Forsyth Medical Center and Wake Forest Baptist Medical Center. The Sexual Assault Response Team (SART) of Winston-Salem/Forsyth County is a community collaborative convened by Family Services with representatives from law enforcement, criminal justice, medical, educational, and other community systems which respond to survivors of sexual assault and develop effective avenues of prevention. 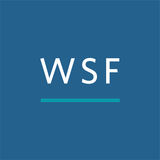