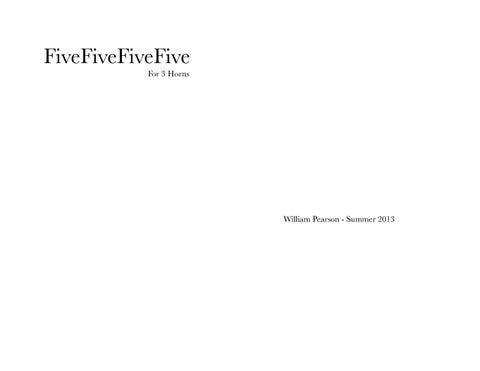 Performance Notes: This piece is inspired by my Grandfather, who suffered a stroke late in life and was left with unusually complete Aphasia. While his thought process and mental comprehension was left intact, his vocabulary was reduced to a single word - “five”. The phonemes of the word ‘five’ influence the form and desired sound of the piece, while the nature of Aphasia influences the relationship between the score and the desired sounds. More specifically, the notation is often meant to be difficult to play “as written”; the complexities of the notation are hidden from the audience in the same way that my Grandfather’s thoughts were hidden in his mind. What the audience hears instead is two stretched-out (and liberally embellished) expressions of the phonemes of the word “Five”. The word Five is split into three sections, each a system long. The piece contains two cycles of ‘Five’ (six systems) and then a two system closing. Each system should be approximately 15 seconds long. Each system (other than the last 2) is repeated twice. Notation in parentheses or using dotted/dashed lines is only played the second time. - The first system corresponds with the fricative ‘f ’ (for reference - http://web.uvic.ca/ling/resources/ipa/charts/IPAlab/IPAlab.htm) The low range and impossibly quiet dynamics of this first system is meant to encourage a sonic flirtation with this breathy sound. A pure sound is never desired; the goal is to hear the struggle between the notation and the ‘f ’ sound. - The second system corresponds with the vowels ‘a’ and ‘i’. The multiphonics here are written so that the buzzed pitches will be difficult to sustain, in favor of the sung or whistled pitches. The relationship between the darker sung pitches and the higher whistled pitches are meant to be reminiscent of the diphthong in ‘five’ between the ‘a’ and ‘i’ phonemes. - The third system corresponds with the fricative ‘v’. This is the most straight-forward system: you need only to keep in mind the association of the ‘v’ sound with the soft buzzed pitches you play.

- The fourth, fifth and sixth systems are embellishments of the previous three, but are played quite differently. Instead of three lines (one for each of the three horns) these systems have three lines which correspond with different elements of one horn’s line:

Systems 4-6 are played twice, but very differently than systems 1-3. The first time through systems 4-6, all three horn players should play all three lines simultaneously (buzzing, singing, hand position) in unison. Again, the difficulty of the notation should ensure that each horn player will be playing quite different attempts at the line, and that is to be encouraged. Exact rhythmic unison is also not necessary.

The second time through systems 4-6, Horn 2 will play exactly what he or she played before, an attempt to play all three lines.

The second time through systems 4-6, Horn 3 will play only the bottom stave (with the added parenthetical notation/dotted lines). This horn player will also blow air through the horn with the notated dynamics, as a way of emphasizing the changes in hand position. Horn 3 will neither sing nor buzz the second time around.

Regular noteheads are buzzed. Diamond noteheads are sung through the instrument. Small noteheads with a W are whistled. X noteheads are breath-noise. Vertical lines are there for cueing/conducting purposes, if necessary, and everyone will be reading off the score. Thank you all so much for playing - I can’t wait to work with all of you! Please let me know any questions or problems you have! I wrote this piece knowing we’d be able to tweak it in rehearsals, and so the notation is fairly malleable - feel free to experiment! My email is wpearso2@illinois.edu - Thanks again! 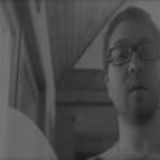