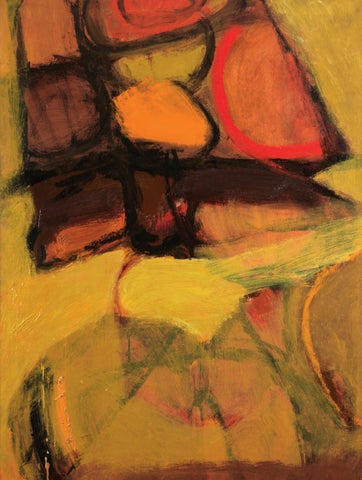 This exhibition covers the period in Irvin’s development from the early 1950’s to the mid 1960’s and represents a transitional stage. In this period the art climate was becoming very lively. There were more art magazines available and in 1956 the Tate mounted the exhibition - Modern Art in the United States - and again in 1959 staged another show - The New American Painting - seventeen artists were represented. Abstract Expressionism was on view in all its manifestations. The overall feeling of the show was one of directness, and of boldness, that was fearless. Many of these works were on a large scale so the spectator experienced the feeling of being immersed in the paintings. Both of these exhibitions were influential for many British artists and confirmed a turning point in Irvin’s work. Further to these shows, the importance must be emphasised of the exhibitions shown at the Whitechapel Art Gallery under the daring and visionary direction of Bryan Robertson. Jackson Pollock 1958, Mark Rothko 1961, Mark Toby 1962, Robert Rauschenberg 1964, and Morris Louis 1965. These shows added greatly to the Zeitgeist of the time. Early in this period Irvin was grappling with abstraction which was figuratively dependent. He was very interested in De Kooning’s paintings particularly the images of Women, which at this time helped to sustain Irvin’s own paintings. Although these works show vestiges of figuration, the dynamics of their making, is as important, if not more so, than the semblance of a figurative reference. At this time he was very aware of the St. Ives painters, many of whom he had met on several visits to Cornwall. The works by Peter Lanyon particularly interested him. When Lanyon took up gliding in 1959 with a view to experiencing the landscape in a new way, he made, not so much evocations of the landscape, but memorable evocations of the experience of gliding itself. Though the circumstances were very different - In the 1960’s Irvin explored remembered experiences of flying, when he was a navigator in the air force during the second world war. His familiarity with maps and seeing the ground from the air, laid out as a flat expanse, stimulated his thoughts about his use and direction of marks, shapes and colour, to evoke a sense of space and travel. Similar qualities also allude to travelling through the urban environment which he experienced on a daily basis. Irvin recognised in Lanyon&#39;s paintings, qualities of life and energy which were close to his own ideas of developing an abstract language. But he continued, for a while, to

make paintings that started with a figurative source because it gave structure to the work. Though he recognised he was searching for a language that wasn’t dependent on looking and seeing and strove towards other aspects of human experience, in terms of emotion and feeling. The American art critic Harold Rosenberg in his article ‘The American Action Painters’ said, “What was going on the canvas was not a picture but an event and the image would be the result of this encounter.” Pollock spoke of the image in his drip paintings, as being a result of where he had been. Irvin said of his large works at a later period, “The marks that accrue are like entries in a diary and say, ‘Where were you at 10.30?’ and answer ‘ I was down here’. ‘And at 4.30? ’ I was up here’, and so on.”The marks are like verbs of a language and communicate action. But they carry import too. They are like pockets of experience.’ Ideas of an intellectual nature only come to fruition when the time is right and they coincide with events and opportunities of a practical nature. This certainly seemed to be the case with Irvin when he got the opportunity to move from his domestic sized studio, in his house, to a large warehouse sized studio at St.Katharine Dock towards the end of the 60’s, allowing him to make large works, that up until then, he could only have imagined. Coupled with this change of working space, came shortly after, the development and availability of acrylic paint for artists. This development had a far reaching affect on Irvin’s painting practice. These two factors of working in much larger studio where he could exploit the possibilities that resulted from working with the properties of the new water based acrylic paint, which ideally suited Irvin’s vision and his spirit of making. These changes were important in contributing to the development and blossoming of his spectacular later work, for which he became so well known.

All works come for the Estate of the Artist 36

Photography all cat. ill. by Mario Bettella, London. Exhibition coordination: Gabriel Toso, Whitford Fine Art, London. Produced by Artmedia Press Ltd, London. Our profound thanks go to Celia Irvin and Cilla Hashmi–Irvin for their invaluable cooperation in organising the exhibition. We are grateful to Mr René Gimpel and Ms Victoria Long of Gimpel Fils, London for their assistance during the preparation of this catalogue.

“Can I reveal the splendours and agonies of life through space, colour, light, shape, line, confrontation, rhythm and inflections in the paint?” - Albert Irvin Whitford Fine Art will hold this autumn the first major posthumous exhibition of early works by and one of the best Abstract Expressionist artists this country has produced, Albert Irvin, OBE, RA.