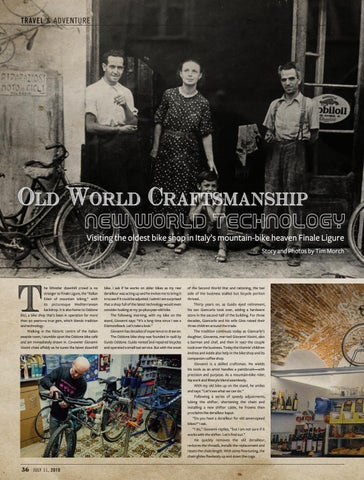 Story and Photos by Tim Morch

he Whistler downhill crowd is no stranger to Finale Ligure, the “Italian Eden of mountain biking,” with its picturesque Mediterranean backdrop. It is also home to Oddone Bici, a bike shop that’s been in operation for more than 90 years—a true gem, which blends tradition and technology. Walking in the historic centre of the Italian seaside town, I stumble upon the Oddone bike café and am immediately drawn in. Co-owner Giovanni Vizzini chats affably as he tunes the latest downhill

bike. I ask if he works on older bikes as my rear derailleur was acting up and he invites me to bring it in to see if it could be adjusted. I admit I am surprised that a shop full of the latest technology would even consider looking at my 30-plus-year-old bike. The following morning, with my bike on the stand, Giovanni says: “It’s a long time since I see a Diamondback. Let’s take a look.” Giovanni has decades of experience to draw on. The Oddone bike shop was founded in 1928 by Guido Oddone. Guido rented and repaired bicycles and operated a small taxi service. But with the onset

of the Second World War and rationing, the taxi side of the business stalled but bicycle portion thrived. Thirty years on, as Guido eyed retirement, his son Giancarlo took over, adding a hardware store in the second half of the building. For three decades, Giancarlo and his wife Gina raised their three children around the trade. The tradition continues today as Giancarlo’s daughter, Giovanna, married Giovanni Vizzini, also a barman and chef, and then in 1997 the couple took over the business. Today the Vizzinis’ children Andrea and Adele also help in the bike shop and its companion coffee shop. Giovanni is a skilled craftsman. He wields his tools as an artist handles a paintbrush—with precision and purpose. As a mountain-bike rider, his work and lifestyle blend seamlessly. With my old bike up on the stand, he smiles and says: “Let’s see what we can do.” Following a series of speedy adjustments, lubing the shifter, shortening the chain and installing a new shifter cable, he frowns then proclaims the derailleur kaput. “Do you have a derailleur for old seven-speed bikes?” I ask. “I do,” Giovanni replies, “but I am not sure if it works with the shifter. Let’s find out.” He quickly removes the old derailleur, re-bores the threads, installs the replacement and resets the chain length. With some fine-tuning, the chain glides flawlessly up and down the cogs. 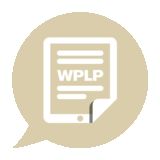