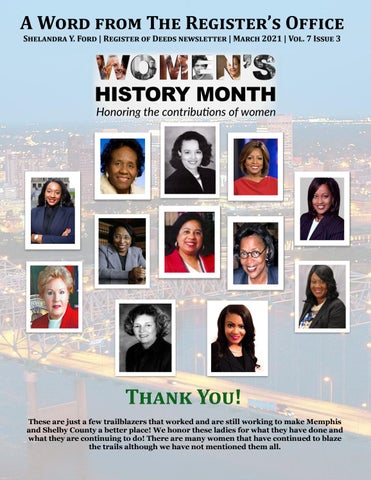 Thank You! These are just a few trailblazers that worked and are still working to make Memphis and Shelby County a better place! We honor these ladies for what they have done and what they are continuing to do! There are many women that have continued to blaze the trails although we have not mentioned them all.

2021 Nancy B. Sorak Nancy B. Sorak earned a master's degree in education from the University of Florida in Gainesville and taught briefly in Pensacola. But then she changed her life. She sold her house and everything in it to pay for law school at Florida State. With her law degree in hand, she moved to Memphis in 1974 to join her Husband, Richard, a pioneer pilot with Federal Express. She looked for work for a year but, as she says, "there weren't a lot of women lawyers then." When she was hired as the first female public defender in Memphis City Court, newspaper and television covered the moment. A year later she was Chief Public Defender. Sorak became the first Woman to run for judge, and win, in Memphis history. While two other females were appointed, in 1967 and 1978, Ms. Sorak won her Judgeship in a tough election. She then won re-election 4 more times and served 16 years in Memphis Tennessee City Court Division 3.

Veronica Coleman Davis Veronica Coleman-Davis was one of three women who formed Memphis, Tennessee's all female law firm; Coleman, Sorak and Williams. In 1989 she was appointed referee of Juvenile Court, the first woman on that bench in 25 years. The pinnacle of Ms. Coleman's career came when she was appointed by the 42nd president of the United States of America — William J. Clinton to be the United States Attorney for the Western District of Tennessee. Ms. Coleman was the first woman and the first black person to hold that post in the United States. In October of 1993, District Judge Odell Horton extended the oath of office to Ms. Coleman-Davis and stated during the ceremony, " We are witnessing a unique and important event in our lives, in the life of the court, and in the life of the judiciary, the city, the county and the nation."

2021 Lois M. Deberry: Born 1945 - Deceased 2013 State Representative Lois M. DeBerry became a candidate for public office in 1972 after becoming disillusioned by her experiences working as a counselor in a federally funded project, where she was one of the few African Americans working with a client population that was almost entirely African American. She was one of five candidates for the state House of Representatives in the 91st District which had been newly defined by redistricting after the 1970 census. She defeated four male candidates and took office in the 88th Tennessee General Assembly. Representative DeBerry was 27 when she was elected to represent Shelby County's 91st District. She was the first woman to be speaker Pro Tempore of the Tennessee House of Representatives and the longest serving member of the Tennessee House Representative at the time of her death in 2013.

She was elected to the Memphis City Council from 2007 through 2015 after serving as a legislator on the Memphis Board of Education from 2000 through 2007. A graduate of Kirby High School, having attended State Technical Institute at Memphis, Bethel College, and the University of Memphis where she studied organizational management. Ms. Halbert previously served as an administrator over 33 years in the Information Technology Division at FedEx Services. Agency.

2021 London Lamar London Lamar, is a member of the Democratic Party and a member of the Tennessee House of Representatives. She was elected in 2018 and currently represents District 91. As of 2020, she is the youngest female Tennessee State Representative currently in office. Ms. Lamar is an ambitious lawmaker and the youngest black woman in the Tennessee State House by more than 30 years. She has served as the President of the Tennessee Young Democrats and has been a vice-chairwoman of the Black Caucus of the Young Democrats of America, among other positions and recognitions. Ms. London Lamar continues to push legislation that will promote Strong Schools, Healthy Families, and Safe Communities.

Mearl Purvis Mearl Purvis grew up on the traditions that have molded her into an award-winning journalist and a community-engaged person. Fairness, family, gratitude, and compassion. Her stories often examine the lives of the unsung heroes and heroines making a difference in their communities.

Ask her what her favorite past time activities are and with enthusiasm she will say reading to school children, enjoying art and music and interior design. Mearl has won eight Regional Emmy Awards, the prestigious Edward R. Murrow Award, the equally prestigious George Foster Peabody Award, and the J.C. Penny Missouri Award. She can be seen weeknights at 5, 6, 9, and 10 p.m. on FOX13 evening newscasts, and she invites FOX13 viewers and fans to always say hello while she is out in the community.

She earned her B.S. in education from Tennessee State University in 1950. She went on to receive her M.S. from Tennessee State University in 1963. Cooper later received a Ph.D. in Religious Philosophy in Christian Psychology from Jacksonville Theological Seminary in 1999. In 1970, Cooper was a community relation specialist for Southwest Community College. She then worked as an instructor for Southwest Tennessee Community College from 1980 to 1986. She was a parent coordinator for the Catholic Diocese of Memphis City Schools in 1986 and from 1988 to 1994. She was inducted in the Memphis Shelby County Schools Hall of Fame in 2019.

Rita Clark Rita Clark was a Germantown homemaker and Democratic activist who surprised herself and everybody else by running for the Shelby County Assessor of Property in 1996. She won on her first attempt and went on to win twice more before she decided not to run again in 2008.

Ms. Clark won in an upset and in the process, her continued success suggested to many Democrats that all other factors being equal, someone of her race and gender made an ideal countywide candidate. During her more than 10 years of service, Ms. Clark was responsible for several innovations in the Assessor's office. She launched an interactive Website and GPS Technology for plotting tracts that is still in use in the Assessor's office today.

2021 Shelandra Y. Ford In September 2018, Register Shelandra Y. Ford won in her first attempt, becoming the first elected African-American and first woman elected to The Register of Deeds. She is now Shelby County Record Keeper. Register Ford also manages the Shelby County Archives. Since taking office, Register Ford has implemented a Property Fraud Alert Program, increased electronic filings from 40% to 80%, launched a new innovative Website and GPS Portal, her office has met budgeted revenue within 7 months of FY21, opened satellite office to accommodate more customers and created electronic records management system for court and government records request. She has also managed to save tax payers over $100,000 in contractual services, while reorganizing her office to improve the technical and operational efficiencies.

Temiika Gipson Temiika Gipson started working for Shelby County Government in November 1993. Starting her journey as a temporary clerk in the Shelby County General Sessions Civil Division, she was quickly promoted to Deputy Court Clerk after a few months. After being assigned to the courtroom, Clerk Gipson's vision became crystal clear that this is where she could make a difference. With 25 years of Shelby County Government experience working in clerk's offices and courts, Ms. Gipson decided to run to become an agent for change, implement structure where it was needed, and enhance the Circuit Court Clerk's Office to better serve the citizens of Shelby County. She ran in 2018 for the Shelby County Tennessee Circuit Clerk's office and won in her first attempt making her the first female and African American to ever hold this office.

Archive Corner MARION SCUDDER GRIFFIN Marion Scudder Griffin (1879 – January 30, 1957) was an American lawyer, and the first woman to practice law in Tennessee. She was born in 1879 in Greensboro, Georgia. Griffin first worked as a stenographer in her hometown. Upon relocating to Memphis, Tennessee, Griffin began studying law while working as a stenographer for Judge Thomas M. Scruggs’ office. In 1900, although Griffin was certified by Chancellor Dehaven and Circuit Court Judge Estes for admission to the Tennessee State Bar, she was denied entrance by Supreme Court of Tennessee twice in 1900 and 1901 on account of her sex. Griffin decided to pursue a higher education, and completed her law degree by 1906 at the University of Michigan’s law school, she was one of two females in her graduating class. The following year, she was able to convince the Tennessee State Assembly to allow women to practice law.

In July 1907, she became the first female lawyer in the state to actively practice law upon being licensed by the Tennessee Supreme Court and her local bar association. Griffin set up a legal practice soon after at the Goodwyn Institute Building, and stayed active until her retirement in 1949. In 1923, she achieved another historical accomplishment by becoming the first female to hold a seat in the Tennessee House of Representatives.

Griffin died on January 30, 1957. Shelby County erected a historical marker in her honor, it is located on the southwest corner of Third Street and Madison Avenue. She is Buried in Elmwood Cemetery. References: Shelby County Archives and Digital Memphis Public Libraries

Honorable Mention Due to inclement weather, the Shelby County Register of Deeds office locations were closed February 15th through February 19, 2021. The safety of our employees are our first priority. Still, the work continued to be processed. Our staff worked from home and completed 4720 transactions. We want to Thank each and every one for their hard work, and for continuing to give excellent customer service. The diligent efforts of our staff during these challenging times has paid off! The Registers office has reached it’s proposed revenue goals for fiscal year 2021! ANSWER KEY TO PAGE 6 1.C 2. A 3.B 4. D 5. C 6. A 7. B 8. D 9. A 10. B