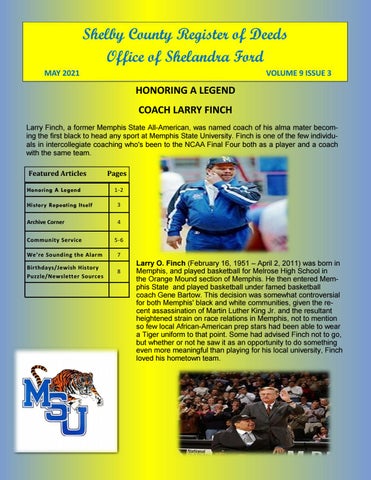 Shelby County Register of Deeds Office of Shelandra Ford MAY 2021

HONORING A LEGEND COACH LARRY FINCH Larry Finch, a former Memphis State All-American, was named coach of his alma mater becoming the first black to head any sport at Memphis State University. Finch is one of the few individuals in intercollegiate coaching who's been to the NCAA Final Four both as a player and a coach with the same team. Featured Articles Honoring A Legend

Larry O. Finch (February 16, 1951 – April 2, 2011) was born in Memphis, and played basketball for Melrose High School in the Orange Mound section of Memphis. He then entered Memphis State and played basketball under famed basketball coach Gene Bartow. This decision was somewhat controversial for both Memphis' black and white communities, given the recent assassination of Martin Luther King Jr. and the resultant heightened strain on race relations in Memphis, not to mention so few local African-American prep stars had been able to wear a Tiger uniform to that point. Some had advised Finch not to go, but whether or not he saw it as an opportunity to do something even more meaningful than playing for his local university, Finch loved his hometown team.

He is perhaps most famous for leading the Memphis Tigers to the NCAA Final Four In his senior year at Memphis State, In 1972–73, he and Larry Kenon led the basketball team to the Final Four. In the championship game, Finch scored 29 points, but lost to John Wooden's UCLA Bruins, a game where Bill Walton went 21 of 22 from the floor. Finch, who had his No. 21 jersey retired on Nov. 30, 1974 Finished his three-year playing career from 1970-71 to 1972-73 as the school's all-time leading scorer with 1,869 point, Finch is currently ranked fourth behind Keith Lee, Elliot Perry and Rodney Carney. His 22.3 points per game career average remains a Memphis record. Finch was drafted on the fourth round by the Los Angeles Lakers in 1973, but opted to join the local American Basketball Association team, the Memphis Tams. Finch played professionally for two years with the Tams, the Memphis Sounds and the Baltimore Hustlers and Baltimore Claws. In the 1980s, Finch was an assistant coach for Dana Kirk at Memphis State. Finch was made head coach in 1986. He would remain at the school, which was renamed the University of Memphis in 1994, until 1997. Finch posted 10 out of 11 winning seasons, seven 20+ win seasons, and six NCAA tournaments. He recruited and developed such players as Elliot Perry, Penny Hardaway, and Lorenzen Wright. His 1991–92 team led by Hardaway and David Vaughn went to the Elite Eight of the NCAA tournament. In 1998, Finch ran for the office of Shelby County Register and lost to the incumbent by only 127 votes despite having no government experience. He was briefly in the running for coaching positions at Tennessee State, Georgia State, and South Alabama..Larry Finch lived as a role model for not only the University of Memphis, but for all of Shelby County by exhibiting the power of working together in the face of adversity. Even while head coach, he maintained connections to his roots; he often visited Orange Mound barbershops, often delivering Memphis State posters and other team paraphernalia. Finch died on April 2, 2011, after a long ill-

HISTORY REPEATING ITSELF ONCE A PLAYER/NOW THE HEAD COACH The Shelby County Commissioners honored Coach Penny Hardaway and the 2020-2021 University of Memphis Men’s Basketball Team on winning The National Invitation Tournament Championship (NIT).

ARCHIVE CORNER MAY IS JEWISH HERITAGE MONTH MEMPHIS PROMINENT BUSINESS MAN Elias Lowenstein emigrated to Memphis in 1854. He was referred to as "one of the five prominent business men of the mid-19th century." Elias Lowenstein emigrated to Memphis in 1854. Elias and his brothers Benedict, Bernard, and Abe all came separately from Hesse Darmstadt, Germany to seek their fortune in the United States. They arrived in Orleans and worked their way up to Memphis which was a logical destination because at the time it was an important river town. The firm which he headed, B. Lowenstein and Bros. Department ELIAS LOWENSTEIN Store, was Prominent in Memphis for 125 years. The firm of B. (Benedict) Lowenstein and Brothers began in a small way in 1860, in a little store at 80 Front Street. It moved to a larger building in the 1880's at 247 North Main Street. The store remained there until the Lowenstein Brothers built their own building at the corner of main and Monroe.

B. Lowenstein and Bros Store

For many years the store maintained a wholesale as well as a retail division, but when the wholesale division burned down in 1910, it was not re-established. Elias then bought out his brothers, and continued to operate the retail store himself. He died in 1919. In 1921 with no immediate family involved, the store was sold to Maison Blanche. The store is no longer in business.

The Lowenstein Mansion and Marker in Memphis B. Lowenstein & Bros. Credit

Register Ford and staff attended the "COMMUNITY WEALTH BUILDING DAY" sponsored by the NAREB, (National Association of Real Estate Brokers). Information was distributed to the public regarding the Register of Deeds "FRAUD ALERT" program. "Wherever we are invited, we will show up, our main objective is to get the FRUAD ALERT information out to all of the residents of Shelby County," said Register Shelandra Ford. Assessor Burgess and staff also participated in the event.

and the “Property Fraud Alert Prothe public of a new program implecommunity.

In calendar year 2020, the recorded more than 33,800 may be the biggest investment peace of mind knowing that Fraudulent Property Filings dled with tens of thousands of work to address these issues district attorney.

Shelby County Register of Deeds Office transfers of property titles. Your home you ever make, and you deserve a your property is protected from fraud. are on the rise, victims are often saddollars of legal fees an time away from with the courts, police department and

GET IMMEDIATE ALERTS! Stay up to date with any information filed with the Register of Deeds in your name by signing up for FREE ALERT. We will immediately notify you if a document is filed under your name or the name of your business so that you can recognize and TAKE ACTION to stop fraud. Signing up is simple, simply visit: register.shelby.tn.us and click FRAUD ALERTS in our Important Links.